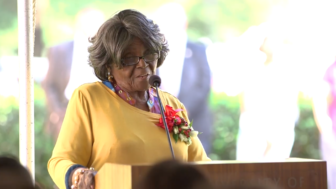 Virginia Gov. Glenn Youngkin has apologized after mistaking one Black legislator for another in a text message.

Youngkin issued the apology after Sen. Louise Lucas called attention to the mistake on Twitter. She noted that she received a text message from Youngkin congratulating her for a floor speech connected to Black History Month.

But it was another African American woman, Mamie Locke, who gave the speech, not Lucas.

On Friday, Lucas sent out a tweet with pictures of herself and Locke, saying, “Study the photos and you will get this soon!”

Lucas told The Washington Post that she initially planned to keep Youngkin’s gaffe private but reconsidered after a bitter debate between Youngkin, a Republican, and Senate Democrats over their refusal to confirm former Environmental Protection Agency Administrator Andrew Wheeler as the state’s Secretary of Natural and Historic Resources.

When Lucas responded privately to Youngkin’s text message earlier in the week informing him of the mistaken identity, Youngkin responded with an apology, according to the Post: “Goodness … so sorry about the confusion,” he wrote in a text response. “I will send her a note. Thanks for the note back!”

His office issued a public apology on Friday after the mistake became public, telling news outlets: “I had the floor speeches on while doing too many things at once earlier this week. I made a mistake and I apologized to Senator Lucas.”