Will Beyoncé Take Home All 9 Grammys This Time?

Beyoncé‘s “Black Parade” ushered her into a new category on Tuesday, dominating this year’s Grammy Award nominees with a total of nine nods. To date, the enigmatic singer has won 24 Grammys.

“Black Parade” was nominated for record of the year and released as a commemoration of Juneteenth, paying homage to Black entrepreneurs. The star simultaneously launched a web market place on her personal website, allowing consumers to back the calls of Black Lives Matter by supporting Black entrepreneurs.

The nods contributed to her total of 79th Grammy nominations, making her the second most nominated person, tied with Paul McCartney. Coincidently, Beyoncé’s husband, rapper-mogul Jay Z is tied in first place with Quincy Jones, with each enjoying 80 nominations.

The Carters share nods this year on “Savage” and “Black Parade,” with the famed referenced Bonnie and Clyde duo sharing co-writing credits on the songs.

“Brown Skin Girl,” from Beyoncé’s “Black Is King” album is up for best video. The song made in tribute to Black women with darker complexions who often are disregarded for falling outside of European beauty standards. Beyoncé’s oldest daughter Blue Ivy appears on the track and music video and could make history if she wins with her mom. “Black is King” is up for best music film.

However, this isn’t Beyoncé’s first time at the rodeo—pun intended. In 2017 she was nominated nine times, losing in a controversial upset to Adele for Album of the Year, when “Lemonade” lost out to Adele’s “25.” Beyoncé took home two awards that year when “Formation” won best urban contemporary album and music video.

Jay Z commented on his own snub in their collaboration “APES**T” rapping, “Tell the Grammys f–k that oh for eight s–t,” referring to the 2018 ceremony where he was nominated eight times for his album “4:44” and walked home empty-handed.

Over the past five years, Black musicians and critics remained outspoken regarding the ways Black art is often trivialized and unacknowledged at the Grammys, which currently serves as the music industry’s most acclaimed honor. In return, Black creatives have opted to place their aspirations elsewhere and encourage others to place less value on an award show that was never meant for their art in the first place.

Other Black artists to watch on Grammy night include Jhene Aiko’s “Chilombo” nominated for album of the year, rappers Da Baby and Roddy Ricch’s “Rockstar” is up for record of the year. Singer H.E.R. is nominated for song of the year with her Black Lives Matter anthem, “I can’t breathe.” Other songs advocating for Black liberation that received nods include Lil Baby’s “The Bigger Picture” (best rap song, best rap performance) and Anderson .Paak’s “Lockdown” (best melodic rap performance, best music video).

Megan Thee Stallion is up for four nominations, including best new artist, competing with rapper Doja Cat in that category.

Comedian and “The Daily Show” host Trevor Noah will take center stage as the night’s host. The Grammy Awards ceremony is scheduled to air on Jan. 31 at 8 p.m. EST on CBS.

Serena Williams, Beyoncé And Janelle Monáe To Be Highlighted In Comic Book 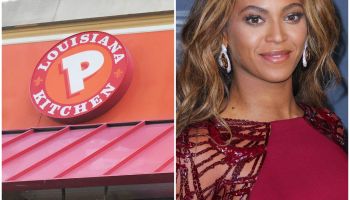 ,
record of the year

,
song of the year