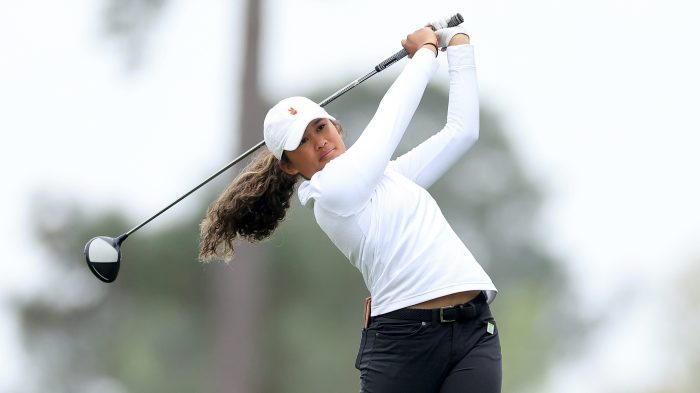 Hulu’s new docuseries, Grails: When Sneakers Changed the Game, has “sneakers” in the title, but that’s merely a Trojan horse for something more profound.

The series details how Olajuwon Ajanaku and Earl A. Cooper filled a gap in golf apparel through their company, Eastside Golf, and their partnership with Jordan Brand. Through interviews with Ajanaku, Cooper, and Jordan Brand employees, along with a few choice celebrities and sneaker enthusiasts, the first two of six episodes explain sneaker culture, golf tradition, and the importance of a co-sign from brand owner Michael Jordan.

But Grails works best when detailing the social and cultural change in a sport that, directly and indirectly, told Black people “keep off the grass” for decades. Ajanaku and Cooper disrupted golf fashion when they created Eastside Golf. They created a fashion template inspired by younger generations rather than golf’s elite class. They wanted golf clothes that “looked cool” instead of pink cardigans and polos in primary colors. Still, their goals are much loftier than sweatshirts, T-shirts, hoodies, and fly kicks.

According to the docuseries directed by Hannah Storm, Ajanaku and Cooper hope Eastside Golf apparel influences and creates more golfers who look like Tiger Woods instead of Rory McIlroy. “Golf is a culture,” says FUBU founder Daymond John in episode one. “Golf has its own way to walk, talk, and dress. But the culture can be broken.” Yeah, but how? The series’ first two parts try to answer that important question.

Grails recognizes the potential land mines in one’s way when pushing against an establishment. Rather than simply telling the audience about the difficulty curve, Grails illustrates it through the two men’s journeys and detailing golf’s racial history. Such the “Caucasian-only clause” that prevented Black golfers from competing in PGA tournaments until 1961.

Amari Avery, 18, is playing not just for herself, but women of color in golfRead now

In the age of cellphones and social media, 1961 may seem like the Stone Age to some, but it’s not that long ago in the grand scheme of things. More importantly, that bylaw’s existence shows the racism ingrained in the PGA’s foundation. According to golf historian and activist Michael Cooper, Woods’ arrival didn’t usher in a new era of Black participation in the PGA, nor did the organization diversify its workforce or membership in response to the Tiger Woods phenomenon.

Through that lens, Eastside Golf’s mere existence is a victory. Cooper’s poignant words constitute a thesis statement for the series: “Allowed is one thing; accepted is another thing.”

How does Eastside Golf find this acceptance? For Ajanaku and Cooper, it started with a logo and grew into a partnership with Michael Jordan. The most prominent part of the logo is the gold chain. Before you notice the blue jeans, the gray sweatshirt, or the baseball cap, or even that it’s a Black man golfing, that gold chain blowing in the wind catches the eye. And unlike the modest Nike swoosh, this logo is massive. Episodes one and two paint Eastside Golf and Jordan Brand as change agents rallying for a cause that may happen in their lifetimes. With Jordan Brand, we see how the company affected sneaker culture, basketball, and marketing for the modern athlete. How it depicts Eastside Golf’s revolution is a tad more subtle.

Episode two starts with Cooper and Ajanaku walking through the PGA merchandise show in Orlando, Florida. They stand out in a room filled with white men wearing standard golf attire. As Cooper comments at one point, the available fashion choices are far from unique. It’s the most subtle and compelling example of the series’ “show, don’t tell” approach.

The Eastside Golf logo rises above the expo like the bat signal above the Gotham City skyline. There’s nothing else like it. Ajanaku elaborates on his inspiration for the logo, what each part of it means, and how it inspired Eastside Golf’s Air Jordan 4.

In a dope touch, Ajanaku explains why he and Cooper picked that model for their signature shoe and the reasoning behind their design choices. These are thoughtful cats with a long-term vision. If one takes nothing else away from the series, let it be that. The series shows everything Cooper and Ajanaku went through as young Black men who loved golf, from deflating microaggression to triumphs such as the first time they saw Phoenix Suns guard Chris Paul rocking their gear in the summer of 2020. Or the moments after their first trip to the PGA merchandise show that resulted in their first big merchandise sellout. 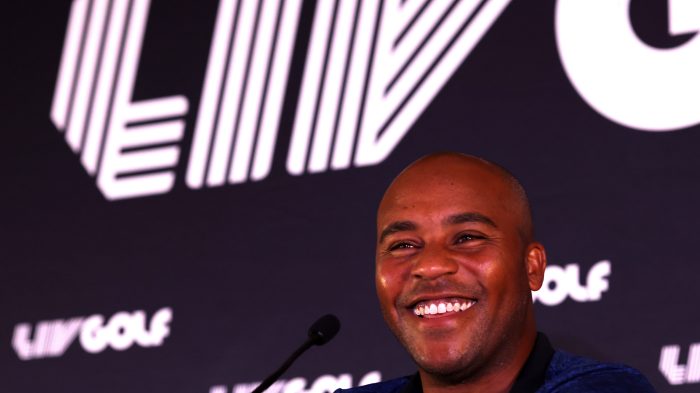 Jordan Brand connected with Eastside Golf out of Jordan’s love of the sport and desire for solid economic footing in golf. Yet the partnership isn’t just about dollars and cents.

Grails makes it clear that the greatest basketball player of all time and Eastside Golf share a common cause: introducing a new generation to the game. Cooper and PGA Tour golfer Luke Donald acknowledge that golf needs to expand its fan base, even if it won’t be easy. Donald believes that only happens if the game becomes “less traditional,” and cites Eastside Golf as an essential piece in moving golf and its culture into the future.

Using fashion as a diversity, equity, and inclusion initiative echoes how some saw hip-hop in the ’80s and ’90s. The music introduced an unknown element into a music business knee-deep in tradition. It also brought Black men and women into homes that might otherwise shun them. Others followed the examples set by those artists and realized that becoming an artist or an entrepreneur wasn’t just for fairy tales.

That’s the type of history Cooper and Ajanaku have on their minds. Grails explains why it’s possible, even while traveling into uncharted territory.

Marcus Shorter is a communications professional and writer. When he’s not scribbling thoughts for Consequence, Cageside Seats or Bloody Disgusting, he’s getting extra nerdy about rap lyrics, politics, poetry and comic books.