Wendy Williams Speaks Out About Mother’s Death ‘Surrounded By Love’

The queen of daytime talk, Wendy Williams, addressed the recent death of her mother, Shirley Williams, during the “Hot Topics” segment of “The Wendy Williams Show” on Monday. The talk show hostess said her mother died “peacefully and surrounded by love.”

Wendy Williams speaks about the passing of her mother. We are continuing to keep her and her loved ones lifted in prayer 🙏🏾 (📹: @WendyWilliams) pic.twitter.com/CxUhUTUXxJ

Madame Noire reported over the weekend that Shirley Williams died after journalist Courtney Brown broke the news on social media.

Shirley Skinner Williams was a learning disabilities resource specialist at the Bradley School in Asbury Park, New Jersey, during her career as a teacher. She raised Wendy Williams and her two siblings, Wanda and Thomas, in Ocean Township, New Jersey, after arriving there in 1959. She was also a member of the historically Black sorority, Alpha Kappa Alpha Sorority, Inc. Besides her children, Shirley Williams leaves behind her husband, Thomas Williams, Jr.

It’s been a rough go for Wendy Williams’ family life over the past year and some change. She went through one of the most intense public breakups last year after her husband Kevin Hunter was revealed to be cheating and had a baby with another woman.

However, Williams has still found time for her trademark benevolence, like when she reached out earlier this year to help an exotic dancer who suffered a serious injury while performing. The stripping routine went viral. When the dancer, Sky, revealed that she has been longing to make a career change, Williams lent a helping hand to make it happen.

When Sky visited Williams’ talk show, she said she did not wish to return to the profession that caused her a number of facial injuries.

“There is something I really really really wanted to say, if anything at all,” Sky said about her injuries. “I’m taking this as a blessing. I’ve been praying to get out of this strip club for a very long time.”

Sky was then surprised when Williams presented her with a $10,000 check to finish beauty school, and to continue with her new life. Sky said she aspired to be an esthetician.

Williams has always shown great strength, like when she persevered through reports last year that her show was expected to be canceled within two seasons. Whether that is true or not, Williams has soldiered through and continues to have strong ratings among syndicated programs.

May Shirley Skinner Williams rest in peace and power. 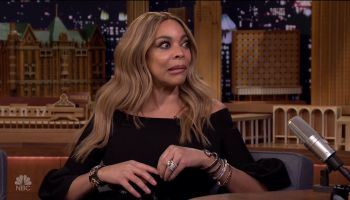 
Wendy Williams Speaks Out About Her Mother’s Death
was originally published on
kysdc.com