LOS ANGELES – As Draymond Green walked out of the Staples Center late Tuesday morning, the Golden State Warriors veteran smiled after he read a text that reminded him about his unexpected road to 10 NBA seasons.

“Coach D.J. just sent me a text when I was walking up the ramp saying, ‘Good luck with the start of the season,’ ” Green told after the Warriors’ shootaround for Tuesday’s season opener against the Los Angeles Lakers.

Ten years before the start of his senior season, Green walked into Michigan State associate men’s basketball coach Dwayne “D.J.” Stephens’ office to talk about his uncertain pro basketball future. While Green believed in his talent, the reality was he wasn’t a lock to make it into the NBA, despite a stellar college career. No NBA prospect gets more scrutiny than a college basketball player who played four seasons. The Saginaw, Michigan, native didn’t want to play overseas either.

At that time, Green’s upcoming bachelor’s degree in education may have seemed to have been more valuable than his basketball skills.

“I wasn’t a top 5 recruit since I was 12 years old that was on this trajectory to the NBA,” Green said. “I wasn’t that. I still remember going into Coach Stephens’ office during my senior year and saying, ‘Coach, I think this is going to be my last year of playing basketball. If I got to go overseas, I ain’t cut out for that.’ Ten years later, here I am. To be starting my 10th year in Staples Center is crazy.”

The 2012 NABC Player of the Year averaged a double-double of 16.2 points and 10.6 rebounds as a senior. He was viewed as an undersized, limited and overweight 6-foot-7 forward. There were 34 picks in the 2012 NBA draft before Green was ultimately selected by the Warriors. He can still recite every team that passed on him with each of the 34 picks and name their selection. 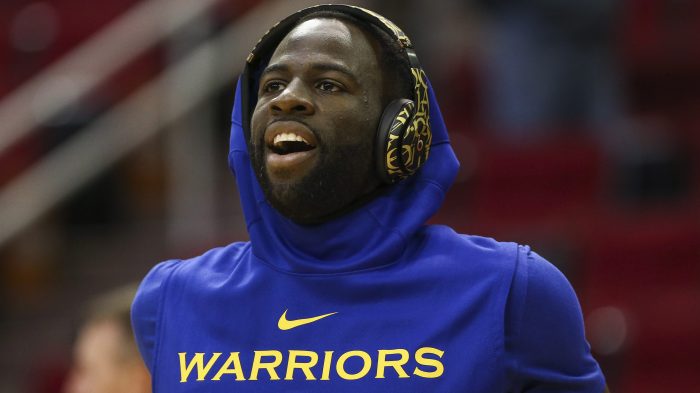 He didn’t vote in 2016, but Draymond Green won’t make that mistake againRead now

“I thought that night that every GM had f—ed that up anyway,” Green said.

Green came off the bench for the Warriors during the Las Vegas Summer League in 2012, after signing a three-year contract paying $850,000 in his first season. He played one minute during his NBA debut on Halloween in 2012 against the Phoenix Suns.

He was away from Michigan for the first time in his life and was homesick in a faster-moving San Francisco Bay Area that he said was a “whole other country.”

“I didn’t know I could make it past Year 1 in the NBA,” Green said.

Green was primarily a reserve his first two Warriors seasons until his “Wally Pipp” moment arrived after David Lee was hampered by a hamstring injury entering the 2014-15 season. Green entered the starting lineup for Lee and has been in that position ever since. And in that third breakthrough season, Green, Stephen Curry, Klay Thompson and the Warriors won the 2015 NBA championship.

On July 9, 2015, Green was rewarded with a five-year, $82 million contract. In one of the most remarkable raises in NBA history, he went from making $915,243 in his third season to $14.26 million in his fourth. The 2017 NBA Defensive Player of the Year didn’t get too comfortable as the Warriors went on to win three championships while he made three All-Star appearances.

Green was again rewarded by the Warriors with a four-year, $99.6 million deal on Aug. 3, 2019. He will make $24 million this upcoming season. Green also has several off-court endorsements and is pegged for a future in television as an NBA analyst after successful guest stints with Turner Sports.

Moreover, with Green’s 10th NBA season, he qualifies for a full pension from the National Basketball Players Association. A 62-year-old Green can receive more than $215,000 annually from his pension. NBA players with 10-plus years of service in the league also qualify for full health insurance for life for themselves, their spouses and children. Scott Rochelle, president and CEO of the National Basketball Retired Players Association, said, “the NBPA-NBRPA health plan is the most comprehensive and beneficial plan in all of professional sports, and we are proud to be the beneficiaries of the NBA players’ support.”

“I remember sitting in those players’ association meetings and they were saying you get a full pension in 10 years,” Green said. “I was like, ‘Man, how am I going to make it to nine years in this league?’ To go into 10, that was never supposed to happen for me.”

Said Rochelle to : “Draymond’s leadership on and off the court has been instrumental to the growth of player development and will translate well into his career off the court. We will welcome him and all of his talents as a member of the NBRPA at the appropriate time. In the meantime, he has more championship basketball ahead.”

Green’s season debut Tuesday night marked the 640th game of his NBA career during the Warriors’ 121-114 season-opening win against the Lakers. Warriors coach Steve Kerr said pregame that Green is still rounding into shape after missing the beginning of training camp due to legitimate family reasons, but says he is in a “good place” mentally and expects him to have a “great season.” The NBA currently has 85 players out of roughly 450 with 10 or more years of experience. And Green appreciates being in that group after expecting the worst.

“I sit and think about it all the time,” said Green, who had six points, eight rebounds and six assists against the Lakers. “I am in Year 10. I’ve done some great s— in this league to be going into Year 10. But I still feel I have a lot more work to do to reach the goals that I want to reach.”

Baltimore Mayor Brandon M. Scott says Lamar Jackson can be a game-changer in his city —