UNCASVILLE, Conn. – Tim Duncan, Kevin Garnett and the inductees of the Naismith Memorial Basketball Hall of Fame’s class of 2020 read their speeches on May 15 from a large monitor with a 10-minute running clock underneath to keep them on time. But when Vanessa Bryant walked to the stage to honor her late husband, Kobe Bryant, there was no running clock.

She would get all the time she needed.

“I wish my husband was here to accept this incredible award. He and Gigi deserve to be here to witness this,” Vanessa Bryant said during her speech. On Jan. 26, 2020, Bryant, along with his 13-year-old daughter Gianna and seven others, died in a helicopter crash in California. “Gigi would be so proud to watch her daddy get enshrined into the Basketball Hall of Fame. I know he was really looking forward to being here. He didn’t really talk about upcoming awards, but he did mention this one a week before he and Gigi passed.”

Kobe Bryant was inducted posthumously into the Basketball Hall of Fame on May 15, a ceremony that was delayed nearly nine months by the coronavirus pandemic.

The weekend was full of Bryant tributes, starting May 14. Throughout the Hall of Fame induction news conference, other honorees spoke with reverence, love and appreciation.

Hall of Fame president and CEO John Doleva told that Vanessa Bryant visited the new Kobe Bryant exhibit on May 14 for the first time at the Basketball Hall of Fame in Springfield, Massachusetts, about a one-hour drive from where the induction ceremony was being held at the Mohegan Sun Casino. The Kobe Bryant exhibit at the newly renovated Hall of Fame was created through a collaboration of Vanessa Bryant, the trading card company Panini America and others.

“I really hope she liked it,” Doleva told , adding that he believes the exhibit will be the most popular part of the Hall of Fame.

At the Hall of Fame’s tipoff celebration and awards gala on May 14, Hall of Fame jackets were presented to the inductees. Garnett’s orange sport coat was presented to him by his two daughters. Duncan’s was presented to him by his former San Antonio Spurs teammate Tony Parker. When it was the Bryant family’s turn, Vanessa Bryant put the jacket on her teenage daughter Natalia. Perhaps overcome with emotion or to give her daughter the spotlight, Vanessa Bryant walked off the stage while her daughter stood tall wearing the oversize coat as photographers’ light bulbs flashed. Natalia Bryant stood in the middle of the Hall of Fame inductees on the stage for a group picture after the ceremony.

Later that night, the Bryant family attended a private dinner at TAO Asian Bistro & Lounge in the Mohegan Sun Casino with former Los Angeles Lakers star Pau Gasol, Lakers general manager Rob Pelinka and Nike vice president of global basketball and sports marketing Nico Harrison. It would be tough to find three men who were closer to Bryant than Gasol, Pelinka and Harrison.

As the Hall of Fame induction program began May 15, Kobe fans in attendance started chanting, “Kobe! Kobe!” Many of them wore Bryant’s old Lakers jerseys or some other type of paraphernalia that honored him. Lakers fan John Roberson flew from Los Angeles to Hartford, Connecticut, so he could see his beloved Bryant get into the Hall of Fame.

“I’m here to represent for the Black Mamba and the Lakers organization,” said Roberson, who wore a Lakers mask and a “Black Mamba” tie to the Hall of Fame dinner May 14. “I’ve been a fan since 1978. I wouldn’t miss this for the world. Kobe’s passing was heartbreaking. … It definitely really impacted us, but we had to be here to show and represent.”

Garnett was the first of the inductees to speak and concluded his speech by looking at Duncan in the first row and saying, “It’s an honor to go to the Hall with you and ‘Kob.’ ” Duncan also said congrats to the “late great Kobe Bryant” during his induction speech.

Former NBA head coach Rudy Tomjanovich also mentioned Bryant during his Hall of Fame speech when talking about the greatest players he coached during his career. Tomjanovich coached Bryant with the Lakers during the 2004-05 season.

“I got to coach the great Kobe Bryant, who thrilled us for 20 years until his last game,” Tomjanovich said.

The Hall of Fame saved the most anticipated inductee for last. After being introduced by host Ahmad Rashad, Vanessa Bryant took the stage while accompanied by Michael Jordan. It was Vanessa Bryant’s first public speech since her husband’s memorial at Staples Center on Feb. 24, 2020.

Vanessa Bryant said during the induction speech that she called Jordan in February 2020 to ask if he could escort her to the Hall of Fame stage for the speech. She also told a story about how Bryant and his father used to buy tickets in the nosebleeds in his hometown of Philadelphia to watch Jordan play. That memory played a role in Bryant not wanting to miss games, knowing that people paid hard-earned money to watch him.

“Thank you for being here. Kobe admired you. This means so much to us,” Vanessa Bryant said. 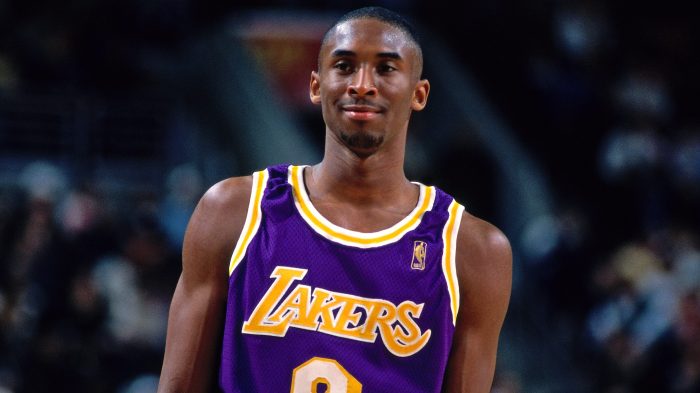 ‘He was just different’: Kobe Bryant stood out among the high school Class of ’96Read now

Vanessa Bryant made a point to say she invited Bryant’s parents, former NBA player Joe “Jellybean” Bryant and Pam Bryant. A source told that they did not attend the Hall of Fame ceremony, but one of his two sisters, Sharia, was in attendance.

Gasol and his wife, Catherine McDonnell, came to the stage after the ceremony. Gasol departed from Barcelona, Spain, where he now plays for FC Barcelona, to attend the ceremony. Lakers great Magic Johnson and Boston Celtics great Bill Russell were there as well.

Vanessa Bryant declined to specifically mention any of her late husband’s former teammates, coaches and mentors in her speech, but thanked them all.

“If my husband were here tonight, he would have a long list of people to thank that helped inspire him and equip him to be in the Hall of Fame. Family, friends, mentors, the Lakers, teammates, muses and opponents,” Vanessa Bryant said. “This is one of the many hard parts about not having them here. At the risk of leaving anyone out, I can only say thank you. To all those who helped him get here, you know who you are, and I thank you on his behalf.”

She also talked about how devoted, energetic and passionate a father he was, as well as about their love for each other.

“Thank you for never missing a birthday, a dance recital, a school award show, show-and-tell, or any games our daughters played and your schedule permitted. Thank you for putting your love for our family first,” she said.

At the conclusion of the ceremony, she took the stage with her two youngest daughters, Bianka and Capri, to take pictures with Kobe Bryant’s Hall of Fame trophy. (She said Natalia wasn’t at the awards ceremony because she was attending her senior prom.)

Vanessa Bryant’s hope was to make her late husband’s Hall of Fame induction a joyous celebration and not a memorial, a source told . On May 15, she sported a stunning purple dress rather than somber black she wore at his memorial last year. She also was shown in a picture smiling and holding a commemorative Hall of Fame jersey that read “BRYANT” and “20” on the back. Vanessa Bryant showed strength and did not shed a tear. She definitely has the Mamba Mentality, too. She even displayed a sense of humor in her speech.

“Right now, I’m sure he’s laughing in heaven, because I’m about to praise him in public for his accomplishments on one of the most public stages,” she said. “I can see him now, arms folded, with a huge grin saying, ‘Isn’t this some s—.’

Kobe Bryant is now in the Hall of Fame forever. And on his behalf, his better half did him justice with her words, presence and strength.

“You did it. You’re in the Hall of Fame now,” Vanessa Bryant said. “You are a true champ. You’re not just an MVP. You’re an all-time great. I love you forever and always. Kobe. Bean. Bryant.”