The gender fluid sea siren, common to the folklore of western, eastern, and southern Africa as well as South America and the Caribbean, is a swirl of powers and emotions. They may seduce, they may bless, they may warn, they may consume. In writer-director Nikyatu Jusu’s feature debut, Nanny, Mami Wata lurks in everyday life, quietly ubiquitous. Their presence slowly grows in the psyche and life of Aisha (Anna Diop), a young mother who has recently immigrated to New York from Dakar, Senegal, until finally, sea-soaked reality cascades upon the shores of America.

Aisha leaves her life as a French and English teacher in Senegal to work as a nanny for a white family on the Upper East Side. Her son Lamine (Jahleel Kamara) is in the care of a cousin and she attempts to maintain their connection with FaceTime calls until she can earn enough money to bring him stateside in time to celebrate his seventh birthday. And so she goes to work for Amy (Michelle Monaghan), a high-strung striver trying her best to maintain a facade of polite, benevolent, workaholic chill, even as her husband, Adam (Morgan Spector), barely contains his contempt for her. Aisha takes care of their daughter, Rose (Rose Decker) and she does it well — too well, much to Amy’s discontent.

The taxonomy of employed and employer on the Upper East Side have been articulated for a mass audience through the eyes of an anthropology major in The Nanny Diaries (2007). This leaves Jusu freed from the chains of exposition — we know what kind of white people Aisha is working for. Monaghan and Spector provide archetypes without devolving into cliché: The tight-lipped Amy fancies herself a feminist while inwardly seething at the blacklight her nanny shines on the fractures of her household, while Adam is the absent Cool Dad, using work to avoid attaching to anything, except, perhaps, other women. This leaves plenty of room for mystery to unfold. Ceramic reliefs of blue waves and the broader ocean-colored decor of Amy and Adam’s apartment — painstakingly curated to project an air of cultured worldliness — begin to haunt Aisha’s subconscious until they eventually break into her real-life actions. Blue is everywhere in Aisha’s life as she works overtime caring for Rose. It is the color of warning, of possession, of environmental asphyxiation, of alienation and strange dissociative breaks. 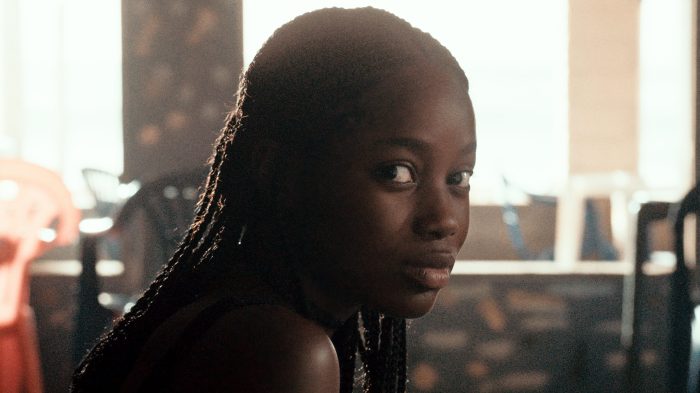 ‘Atlantics’ haunts its audience with a Senegalese story of love, class and capitalismRead now

Within her chosen genre of horror, Jusu cuts an impressive figure, eschewing the cheap currency of gore or jump scares in favor of meticulously crafted mise-en-scène and production design, stripping away the surface comfort of the domestic arena to reveal the insecurity Amy is so desperate to ignore.

As with her 17-minute short, Suicide by Sunlight, Jusu demonstrates her ability to do a lot with a little, painting the domestic realm with ominous soundscapes, bathing her lead character, a mother who is also a vampire, in dark shadows and secrets. In Nanny, which won the grand jury prize at this year’s Sundance Film Festival, audiences get the chance to fully appreciate Jusu’s knack for world-filling and her penchant for verbal economy.

Such a style relies on two major factors in order to be successful: performances from actors who translate Jusu’s quiet, unfussy clarity, and disciplined cinematography (here by Rina Yang) that captures her prodigious usage of visual metaphor. And Diop is an excellent choice to carry Nanny, commanding scenes with a contained, unshaking placidity, especially when Aisha is dealing with Amy or Adam. It’s the kind of peace they find unnerving, especially in the body of an immigrant Black woman who resists their hollow gestures of kindness and inclusion that really serve to dissolve boundaries and extract unpaid labor. 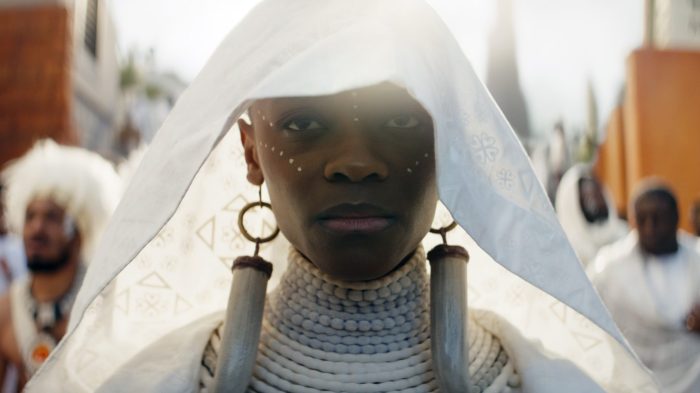 There are elements of Jusu’s work that remind me of the playwright Jackie Sibblies-Drury, in particular the play Marys Seacole, a multi-era tableau that also ruminates on the nature of care work performed by Black female immigrants — their invisibility, their self-regard, and the venues where those two elements become a fault line. These women are expected to perform gratitude for the cheapskates who employ them, adhering to colonial expectations that staff erase any evidence of a life outside of functioning as child-rearing appliances. Diop captures all of this with an even-keeled ease, even as her character must swallow her exasperation to request payment, thereby disrupting the terms of equilibrium Amy would rather be implicit.

These dynamics and the stress they exact roil beneath the surface of Diop’s performance for most of the film until Aisha can no longer ignore the calls of mercy and mayhem lurking everywhere in her life, the calls of Mami Wata.

Nanny is currently in theaters and is available to stream on Amazon Prime on Dec. 16.