The beat of a culture: how HBCU bands relate to Black music legacy 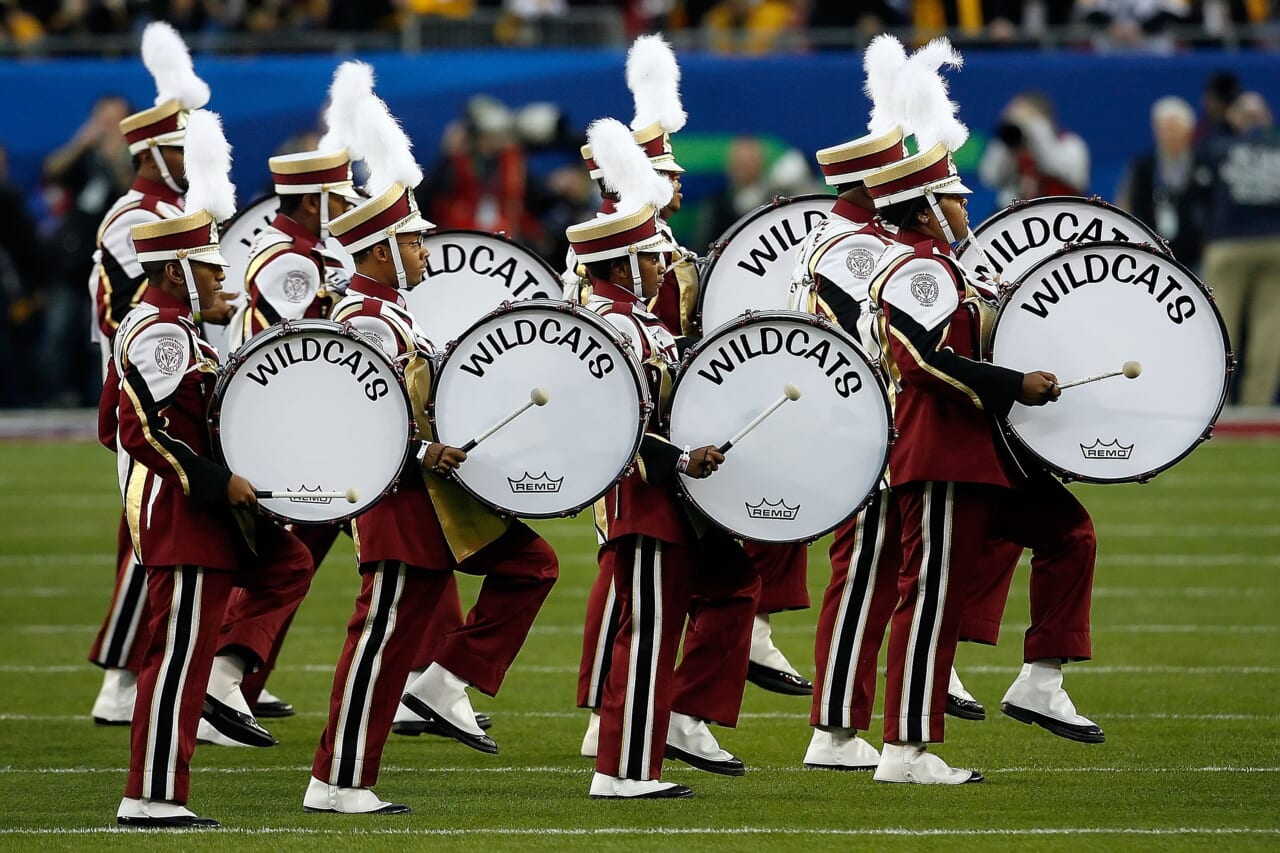 
WASHINGTON, DC – SEPTEMBER 23: The Tennessee State University Aristocrat of Bands marching band performs on the South Lawn of the White House during a reception in honor of the opening of the Smithsonian National Museum of African American History and Culture September 23, 2016 in Washington, DC. Founded in 1946, the band performed during the inauguration of presidents Bill Clinton and John F. Kennedy, making them the first historically black college or university to perform at a presidential inauguration. (Photo by Chip Somodevilla/Getty Images)

August 2009, I entered the campus of Kentucky State University, a mid-size, land-grant school atop the hill in Frankfort, KY. Among the hustle and bustle of dozens of eager freshmen moving into our new temporary residence, the sound of the band practicing in the open field next door amplified the energy in our dormitory.

Amidst the extra-humid summer heat the Mighty Marching Thorobreds, also known as MMT, provided the soundtrack for move-in day and the remainder of my time in undergrad. The same holds true for most students and alumni of most Black institutions.

Year-round, the tubas, drumlines, and saxophones echo throughout the campuses of historically Black colleges and universities, creating a valiant soundtrack to Black college life. For band members, marching is more than a performance.

READ MORE: Little Richard will be buried at Alabama HBCU he attended in the 1950s

“Being in the band was more than just playing music,” says Ryan Redding, a former member of the trombone section of  Bethune Cookman Marching Wildcats, known as The PRIDE from 2008 to 2013. “It provided me with the tools to receive my college education, while giving me experiences I will never forget. From performing in front of millions of people to making lifelong friendships. Band has literally molded me into who I am today.”

The bands and band culture at HBCUs highlight all aspects of Black music through skill and performance. New generations are introduced to music and artists before their time, taking current musical trends to the next level with intricate performances and creating a culture built on musicality and passion for a legacy in sound.

The Bethune-Cookman University band performs during the pre-game show prior to the start of Super Bowl XLIII between the Arizona Cardinals and the Pittsburgh Steelers on February 1, 2009 at Raymond James Stadium in Tampa, Florida. (Photo by Kevin C. Cox/Getty Images)

From the intricate eight-counts performed by bedazzled dancers to the stylistic nature of each band section, every HBCU has its own practices that set them apart from another. As a family, the collective explores a level of showmanship only found at our institutions.  HBCU bands deliver R&B, hip-hop, jazz, rock & roll, funk, and other styles in a unique manner that redefines Black music.

Black music encapsulates an enormous volume of genius and creativity. Genres birthed from traditions dating back to slavery have evolved into the massive scale of rhyme, rhythm, soul, and bass popular today. For some, joining an HBCU band was an introduction to Black songs they were previously unaware of.

Jeaiza Quinones attended Prairie View A&M University and marched with the Marching Storm Band,  playing clarinet from 2013 until 2017. She says that the experience gave her “a deeper appreciation for Black music in general.”

“It exposed me to so much more music,” to theGrio. “There was sort of a cultural divide for me being from the Caribbean and then coming to the US, and learning more traditional Black music through the music that we played in the band. A lot of the music that my friends or the people that have been with me considered classics were songs that weren’t as familiar to me right away. Looking back, because I’ve spent that many years in the band program, those are songs that I recognize are associated with, like, HBCU culture. Songs like ‘Before I Let Go’ (Maze feat. Frankie Beverly, 1981) and other like classics.”

Although Quinones’ experience comes from her island upbringing, many past band members from other campuses were also introduced to funk, soul, and R&B records through their performance in band.

“You join a lineage when you join an HBCU band of so many black musicians,” says Larry Jenkins, a member of Tennessee State University’s Aristocrat of Bands. “A lot of those who have grown to prominence on national or international type stature, but even on a different level, you feel it in your soul. It’s something that you feel like you are part of. With playing the music you get new music and in the band, what ends up happening is you go back and search some of the artists and search for some of the songs that you may not have known. That’s another way to get connected and really become a part of it. You learn about the culture and learn about music. You learn about how to interpret the music, learn how, the roots to some of that music.” 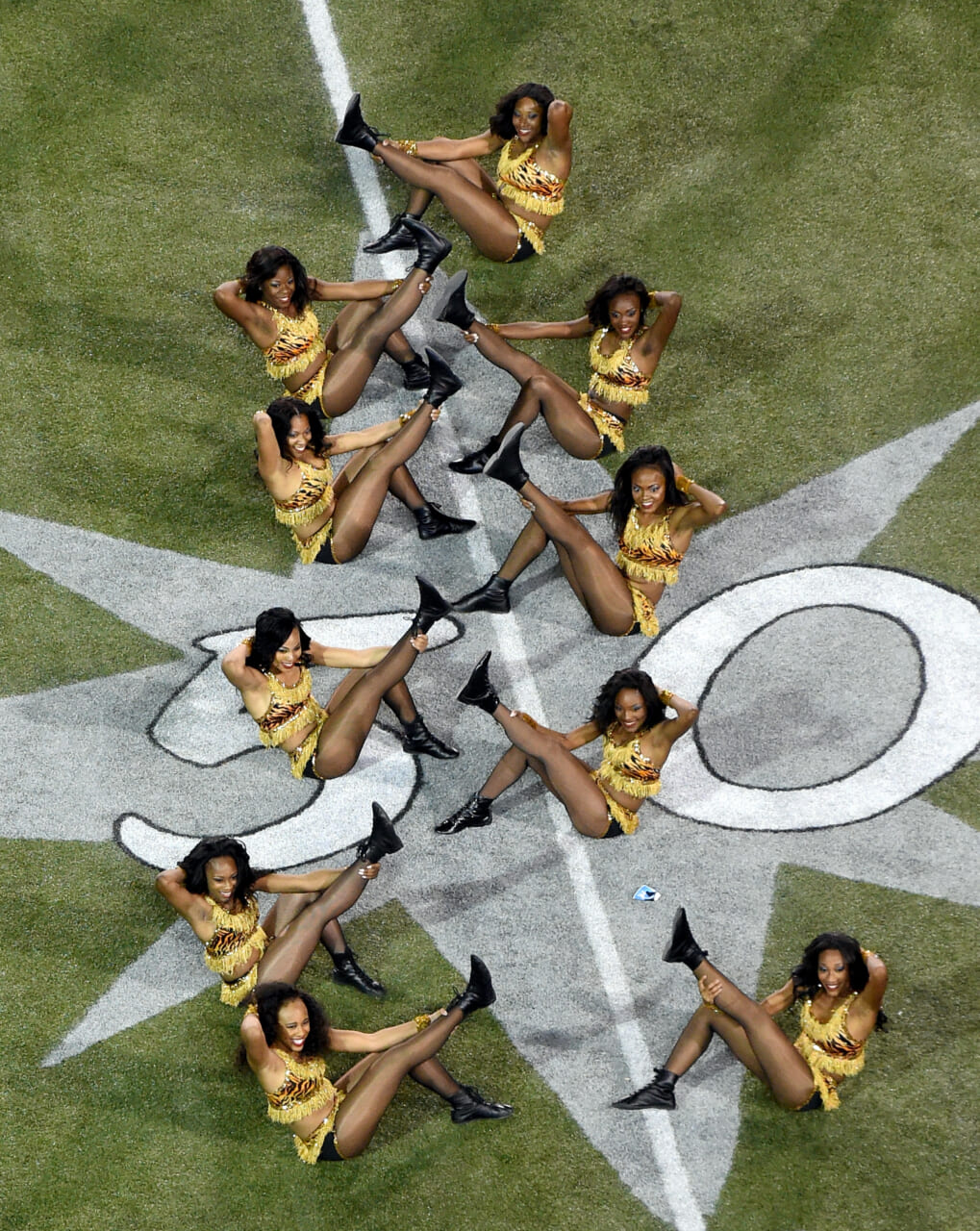 Members of the Jackson State Tigers Prancing J-Settes dance team perform with the Sonic Boom of the South marching band at halftime of the team’s game against the UNLV Rebels at Sam Boyd Stadium on September 1, 2016 in Las Vegas, Nevada. (Photo by Ethan Miller/Getty Images)

READ MORE: How HBCUs are handling the coronavirus pandemic

Speaking with over 20 former HBCU band members from over a dozen schools with enrollment ranging from 1986 through 2020, the range in songs varied from year to year. However, certain names came up in almost every conversation. Stevie Wonder, Earth Wind and Fire, Michael Jackson, and Cameo were all listed as favorite artists for band directors to create arrangements from. Although these commonalities exist, each unit has its own distinct style as well.

“Well, when you talk about Jackson State University, there are a few,” says James Wesby, a member of the Sonic Boom Of the South from 1992 to 1994. “One of them is the infamous, ‘Get Ready’ from The Temptations, and this is how we actually march inside the stadium. ‘The Show’ by Dougie Fresh and Slick Rick, I introduced this in 1993 at the Alcorn game and it has been going on, until now.”

Dancers are also integral to empowering the half-time and fifth quarter performances.

“My favorite part of being in the band and on the dance team was traveling and performing in front of the crowd,” shares Demetria Archie, a former dance captain of Central State University’s Marching Marauders. “It was a feeling like never before. It was time to put your best foot forward and giving it [your] all. You literally have one time to blow it out of the park, leaving it all on the field, and what you don’t leave you will lose forever.”

The band not only welcomed standard sound to young musicians—as a collective marching enforced a code of discipline. For many band members, this experience is standard. Marching with an HBCU band is a year-round sport that instills work ethic, determination, and familial bonds. From band camp to football season and spring performances, the members of the band gained much more than a heightened knowledge of musicality. The familial bonds, strict practices, and performance adrenaline helped mold some members into the confident adults they are today.

“When I went to Kentucky State and as I was around like-minded intelligent, focused people,” says Dinetta Merriweather, a member of the Mighty Marching Thorobreds from 1986 through 1989, where she played clarinet and became drum major. “It’s kind of a little spark in me. Everyone could depend on one another. They were reliable. Everyone was really to help each other.”

Merriweather says that although there was a sense of camaraderie in the band, she nervous about possibly facing colorism when she first started. The former drum tells theGrio that she was often teased in high school in the ’80s for being “a dark-skinned girl, kind of thick.”

“I had been a sprinter in high school and middle school, so I had thick legs back then, which wasn’t quite ‘in’ like they are now,” she explains. “I wasn’t looked upon as the prettiest girl, or the most it girl in high school, although I was involved in a lot of extracurricular activities.” 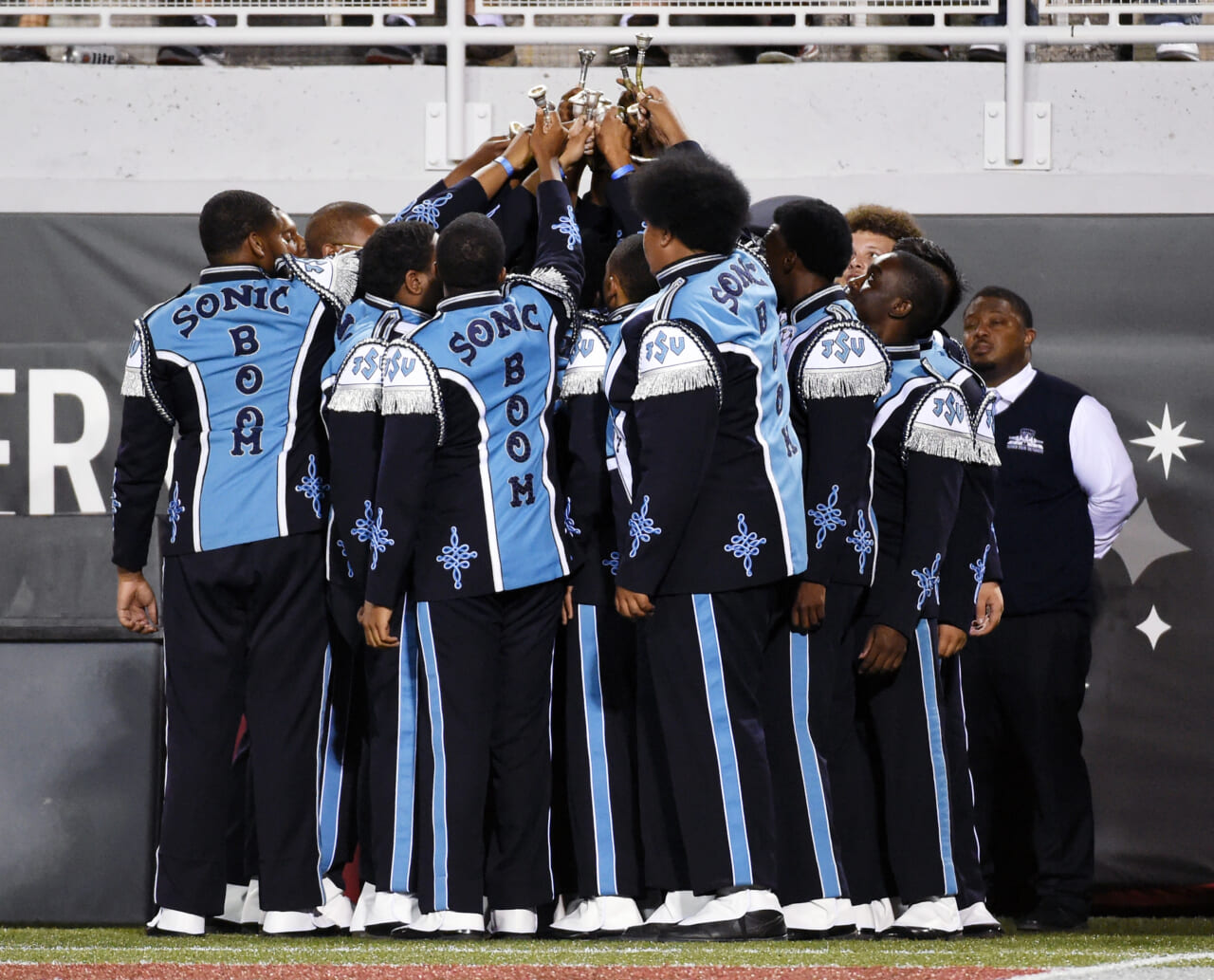 Members of the Jackson State Tigers Sonic Boom of the South marching band get ready to perform at halftime of the team’s game against the UNLV Rebels at Sam Boyd Stadium on September 1, 2016 in Las Vegas, Nevada. (Photo by Ethan Miller/Getty Images)

When she got to Kentucky State, however, things changed.

“The diversity of the musicians that were in the band, at that time, and still to this day made me feel like I was on another planet. We had people from Chicago, we had people from New York, a lot of members were from Detroit,” she says. “I became a minority coming from the south. There were more northern members and they were very pro-Black, very pro-self positivity. If you couldn’t lift yourself up they would help you lift yourself up. I first noticed that my brown skin that I was in was beautiful, and I talk about that a lot. When I do speaking engagements or I’m speaking to some of my fellow bandmates or colleagues, I talk about, how I never knew how beautiful my Black was until I was a member of the Kentucky State University band. They put me out in front, they respected me, we respected each other. It’s a lot of love. I wouldn’t change it for anything.”

This spirit of pro-Blackness is echoed in modern, mainstream adaptations of HBCU band culture relating to music and performance. As much as the bands are inspired by the artists, the script can be flipped. Performers today frequently incorporate HBCU culture in their art. Lizzo took a trip to Baton Rouge, Louisiana to incorporate the Human Jukebox Marching Band in her official music video for “Good As Hell,” a carefree empowerment anthem with a jazzy melody and soul-influenced vocals.

Beyoncé’s landmark Coachella performance, dubbed as “Beychella” and immortalized through a Netflix documentary Homecoming, brought HBCU band style and performance to one of the biggest music festival stages in the country—in front of an audience who were mainly unfamiliar with the inspiration. The Lemonade singer gathered current and former members of HBCU bands for the historic event.

“Jackson State University has a plethora of experience, like I said, outside of Mississippi. Beyonce was influenced by our J-Settes, which is our dancing crew. Ciara had the J-Settes in her ‘Level Up’ video,” remarks Wesby.

He continues, “HBCUs, especially Jackson State, has put a mark in the media, videos, the music scene.”

Together, HBCU bands and Black music live mutually. As music expands and creates new sounds and genres, directors and eager students are able to adapt modern styles into new performances and arrangements. As the band innovates, the culture grows.

“Being in the band, marching band especially, you have a different perspective of music,” remarks Redding. “When playing these songs you get a different feeling when you hear the original record. You can hear and feel every beat.”