Environmentalists and activists claimed victory Saturday after a company canceled plans to build an oil pipeline through southwest Tennessee and north Mississippi, and over an aquifer that provides drinking water to 1 million people.

Byhalia Connection said it will no longer pursue plans to build a 49-mile underground artery that would have linked two major U.S. oil pipelines while running through wetlands and under poor, predominantly Black neighborhoods in south Memphis.

A joint venture between Valero and Plains All American Pipeline, Byhalia Connection had said the pipeline would bring jobs and tax revenue to the region — and it had given to Memphis-area charities and tried to build goodwill in the community. But, in a Securities and Exchange Commission filing Friday, Byhalia Connection said it was canceling the project “due to lower U.S. oil production resulting from the COVID-19 pandemic.”

“We value the relationships we’ve built through the development of this project, and appreciate those that supported the project,” Byhalia Connection’s statement said.

Byhalia Connection would have linked the east-west Diamond Pipeline through the Valero refinery in Memphis to the north-south Capline Pipeline near Byhalia, Mississippi. The Capline, which has transported crude oil from a Louisiana port on the Gulf of Mexico north to the Midwest, is being reversed to deliver oil south through Mississippi to refineries and export terminals on the Gulf. 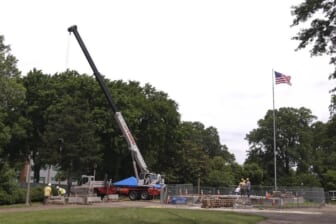 Byhalia Connection also would have run through well fields above the Memphis Sand Aquifer, which provides slightly sweet drinking water to the Memphis area. Environmentalists, activist groups, lawyers, property owners, national and local elected officials, and even former Vice President Al Gore opposed the project. They feared an oil spill would have endangered waterways and possibly contaminated the water being pumped out of the ground through wells located along the planned route.

Opponents said the plans reminded them of environmental racism — the practice of placing toxic factories, landfills and other polluters in minority neighborhoods and indigenous areas, where voiceless residents only realize the danger after people get sick.

The pipeline would have run under Memphis neighborhoods such as White Chapel, Westwood and Boxtown, which began as a community of freed slaves in the 1860s and where homes had no running water or electricity as recently as the 1970s.

Justin J. Pearson, a leader of the Memphis Community Against the Pipeline activist group, called the decision “an extraordinary testament to what Memphis and Shelby County can do when citizens build power toward justice.”

Byhalia Connection had said the pipeline would be built a safe distance from the aquifer, which sits much deeper than the planned pipeline route.

Byhalia Connection also has said the pipeline route was not driven by factors such as race or class. The company denied accusations of environmental racism that emerged after a Byhalia Connection land agent said during a community meeting that the developers “took, basically, a point of least resistance” in choosing the pipeline’s path.

Project officials had reached deals with most landowners on the planned pipeline’s route to use their land for construction. A few holdouts were taken to court.

The pipeline’s lawyers sought eminent domain, long invoked by governments to claim private property for public-use projects. Lawyers for the holdouts argued that eminent domain could not be used in the case of a private company seeking to build an oil pipeline in Tennessee.

In April, Byhalia Connection said it was going to pause the legal action after the Memphis City Council began considering an ordinance that would have made it harder for the company to build the pipeline.

No vote has been held on the ordinance, which was one of several strategies meant to put public pressure on Plains and Valero.

Activists held community rallies, including one attended by Gore. Lawyers sued in federal court, challenging the U.S. Army Corps of Engineers’ approval of the pipeline under a nationwide permit. The Shelby County Commission refused to sell to the pipeline builder two parcels of land that sit on the planned route.

U.S. Rep. Steve Cohen, a Memphis Democrat, and about two dozen other members of Congress sent a letter asking the administration of President Joe Biden to reconsider the permit approval.

A Byhalia Connection spokesman did not respond to an emailed question asking whether the community’s resistance influenced the decision to end the project.

But Amanda Garcia, a Southern Environmental Law Center attorney who helped landowners in their legal battle against the pipeline, said the community’s fight was inspiring.

“The cancellation of the Byhalia Pipeline is a victory for the people of Southwest Memphis, for the city’s drinking water, and perhaps most monumentally, it a triumph for environmental justice,” Garcia said.