Stephen Curry has long been an admirer of Lee Elder, who endured racism as the first Black man to play in the Masters Tournament in 1975. So, of course the Golden State Warriors’ all-time leading scorer made it a point to watch the golf legend make history again at the 2021 Masters, where Elder served as an honorary starter alongside Jack Nicklaus and Gary Player on April 8.

“To know that [Elder] gets his flowers while he’s still here, one, but to know what he went through at ’75, just to qualify for the Masters, to show up there with death threats and hate messages and just a very volatile kind of atmosphere,” Curry told in a phone interview Sunday evening. “And now he’s up there with two other legends getting a round of applause. So many amazing words, and deservedly so, of his impact and legacy in the game.”

The 86-year-old Elder teased the crowd by holding a golf ball in his hand for the tee shot, but didn’t attempt to hit it with his driver due to his physical ailments. Still, it was a special moment for Elder, who recalls his proudest moment happening at the 1975 Masters.

“Just thinking about the death threats that had been sent to me, the phone calls that had been made to me, was certainly the thing that was really something that I was really frightened about,” Elder told in a Zoom call on Sunday. “My proudest moment was certainly when I walked to the first tee because I had been pretty nervous, no doubt about that. But when I walked out of the clubhouse and headed towards the first tee, I seemed to relax a little bit. And I think the reason why was because of the fact that I was about to now perform in one thing that I had been waiting so long to perform in.

“The first tee was the only thing that was on my mind and really hoping and praying that I wouldn’t hit one of my worst shots and hit somebody. But fortunately enough, I hit the ball down the middle of the fairway.”

Now, Elder and Curry are focused on the future of golf. Both would like to see more participation in the sport by African Americans.

In the 2021 Masters, Hideki Matsuyama of Japan became the first Asian-born man to win the tournament. But only one of the 88 participants was of African American heritage (Cameron Champ). Five-time Masters champion Tiger Woods did not participate as he is recovering from major injuries from a car crash.

Despite the doors that Elder, Woods, Charlie Sifford and Calvin Peete opened for African Americans in golf, to have only one Black man participating in the Masters disappointed Elder.

“I thought there would be many more [Black golfers] than what was there at this time,” Elder said. “In the late 1970s, we had 12 Black golfers playing on the PGA Tour. But the disappointment was the fact that they did not play up to the standard and were unable to keep their [PGA member] cards, so that was very disappointing. … But those things happen and come about and I just hope that we can accumulate more now out of the wonderful programs that we have around the country and get some of these young people interested in the game of golf. …

“We are a dying breed on the PGA Tour, and I’m speaking of the minorities. The minority race, as far as them coming on the tour and playing, it’s just not happening.” 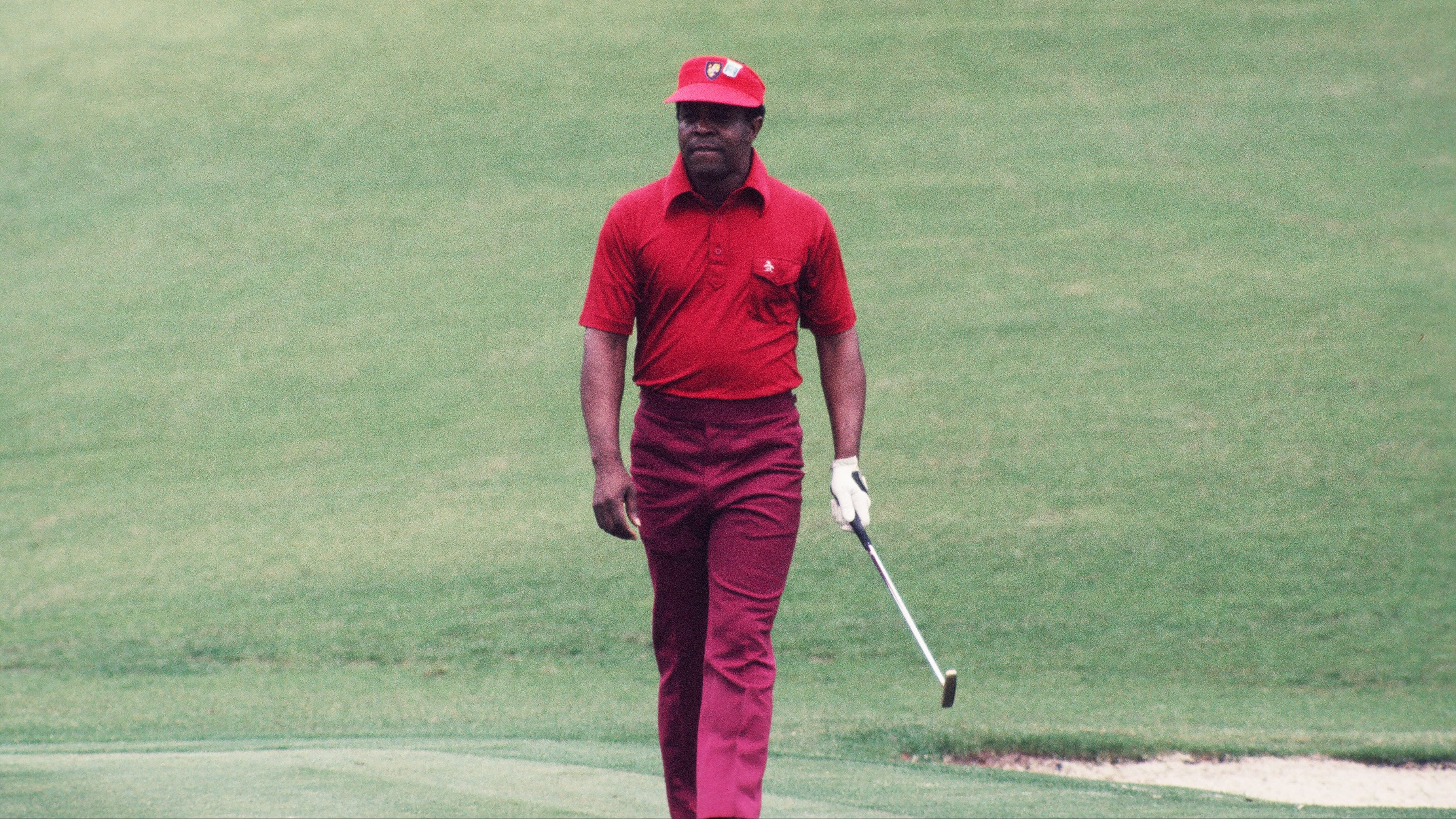 Elder learned to play golf on some lackluster public golf courses in Los Angeles, where he lived at a young age with his aunt after his father died in World War II and his mother died shortly after. Being able to play on those rough golf courses made it easier for Elder to adjust once he was good enough to play on better courses.

Elder understands that access to the game is a problem for many young African Americans interested in golf.

“The corporate world has to play a part in [helping] the younger generation striving to come on tour,” Elder said. “It is going to be difficult financially unless you have a parent that has the money and the willingness to put it up for you to go through all of these stages that you’re going to have to go through to come on the PGA Tour to play.”

Curry has been trying to do his part in helping to spotlight golf for African Americans.

Curry, who went golfing regularly during his youth with his father, former NBA player Dell Curry, regularly posts video on social media of himself playing golf. The NBA star made a major donation to Howard University in 2019 to pay for the costs of the first six years of new Division I men’s and women’s golf programs, including coaches’ salaries, and scholarships. On April 8, Curry also announced the release of a special Masters-themed baseball-style cap through his new Curry Brand with Under Armour. On the cap, “1975” is stitched on the front to honor Elder’s arrival to the Masters. There is also a quote from Elder on the side of the cap that reads, “Stay the course.” 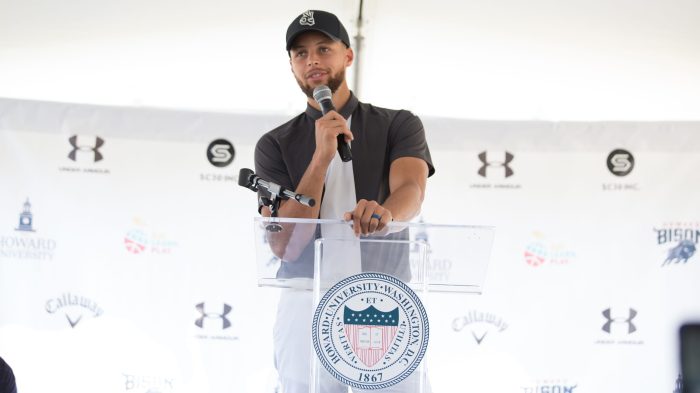 “It’s so wonderful because here’s a man that really cares about the younger generation and the future of the game of golf, and not necessarily just basketball,” Elder said of Curry. “When you find someone like a Steph, you don’t find too many of them who takes his time, who has the passion for other things besides just running the sport that he’s involved in.

“That’s one of the reasons why I’ve always admired Steph from the time when I first saw him play. And I know that my admiration for him will continue on as we go down the road.”

The admiration is mutual. Curry has experienced racism on the golf course, too, and says he can’t imagine what Elder went through.

“When my dad was looking for memberships at certain places, you kind of could get that vibe and hear the chatter. He was obviously a professional athlete, so there was a little bit of a dull of the effect, honestly. But you still had heads turn when you show up to a course, if you didn’t know anybody or they were questioning why you were there or they didn’t know who my dad was at the time. I started playing when I was, like, 10 in ’98, ’99. Go back 45 years, I can’t imagine what [Elder] went through, man. I cannot. I cannot imagine,” said Curry, who interviewed Elder through his Curry Brand on Sunday.

“Golf is such an individual sport. I can’t imagine how lonely that was, with the anticipation and buildup. To cross that threshold for the first time and the uncertainty and the unknown there, with it only being him and the magnitude of that moment, I honestly can’t imagine it. Going into the [NBA] Finals or going into a hostile [NBA road] environment, sounds like a life-or-death situation, but at least you have 12, 13 other guys to lean on and give you that juice. He was out there by himself and all on his own, keeping his composure and representing himself amazingly through it all.”

Elder, who retired from golf in 2005, also credits Woods for setting an example on the golf course.

“Tiger has done so much for the game and has done so much for not only just the minorities, but for all of the races,” said Elder, who considers Woods a good friend and expects him to come back strong. “You look upon him as a leader. And I know that I do and I have always because I felt that he was the one person that was setting the example for us to follow in the game of golf.”

As for his own legacy, Elder hopes to be viewed as a man who paved the way.

“I hope I am remembered as a man that made a difference,” he said. “That helped the other generation that was coming up behind him. That I did it the right way, and I did it in a way that everybody would enjoy it and everybody would want to pattern after that.

“My legacy would be when it’s all over that I was able to help others and lead them in a direction that they can be proud of at the end of their career.”