Three top Senate Democrats want to decriminalize marijuana and they’ve drafted a plan to end the federal ban on cannabis. 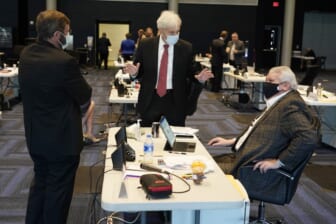 Senators Chuck Schumer of New York, Ron Wyden of Oregon, and Cory Booker of New Jersey announced the reforms on Wednesday, NBC News reports. The reforms would include a series of programs to help communities of color that have been greatly impacted by the so-called War on Drugs.

There are currently 18 states with legalized recreational pot use. Thirty-seven states, the District of Columbia, Puerto Rico, Guam, and the U.S. Virgin Islands, have legalized medical marijuana.

“The Senate has to catch up with the American people,” said Majority Leader Schumer.

“While red and blue states across the country continue to legalize marijuana, the federal government continues to lag woefully behind,” Booker said in a statement. “It is time for Congress to end the federal marijuana prohibition and reinvest in communities most impacted by the failed War on Drugs.”

The senators’ draft proposal states the measure “will ensure that Americans – especially Black and brown Americans – no longer have to fear arrest or be barred from public housing or federal financial aid for higher education for using cannabis in states where it’s legal.”

“Cannabis prohibition, a key pillar of the failed War on Drugs, has caused substantial harm to our communities and small businesses, and especially for communities of color,” Wyden said. “It’s as simple as this: Senators Booker, Schumer and I want to bring common sense to the federal government, end prohibition and restore the lives of those hurt most and set them up for opportunity.”

“The President supports leaving decisions regarding legalization for recreational use up to the states; rescheduling cannabis as a Schedule II drug so researchers can study its positive and negative impacts; and, at the federal level, he supports decriminalizing marijuana use and automatically expunging any prior criminal records,” Psaki said at the time. “He also supports legalizing medicinal marijuana.  So that’s his point of view on the issue.”

When asked if President Biden would sign a bill legalizing marijuana at a federal level, Psaki replied, “Well, I just have outlined what his position is, which isn’t the same as what the House and Senate have proposed, but they have not yet passed a bill.”

At a press conference on Wednesday, Schumer said cannabis “overcriminalization has been one of the great historical wrongs” of the past few decades, per the report.

The legislation, if passed, would allow marijuana to be taxed and regulated like alcohol and tobacco. States could still prohibit the use of cannabis. Under the bill, it would still be illegal to sell significant quantities without approval and proper licensing, according to the report.

It remains to be seen how much support the bill will garner in the Senate as Republicans are expected to oppose it.

“I don’t understand how Republicans who say they are for ‘state’s rights’ won’t support what my colleagues are talking about,” said Wyden. ”What this bill does is we decriminalize at the federal level, but we don’t require states to legalize.”