South Carolina state senator Mia McLeod is on a history-making mission after announcing on Thursday that she is running for governor in 2022. A Black woman has never served as a governor in the U.S., but the Richland County Democrat aims to change that. 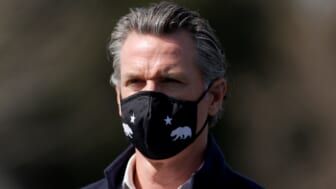 McLeod, 52, announced her bid in the 2022 race on Thursday at Columbia’s Modjeska Monteith Simkins House. She is the first Black woman to run for governor in South Carolina.

“This is Bennettsville, South Carolina. A place so neglected by so many for so long that some even call it the, ‘corridor of shame.’ It’s the place where I was born. It’s the place that shaped me. And the truth is, all across South Carolina, we share similar stories, stories of love, of faith, of defying the odds,” McLeod says in a two-minute ad she released on Thursday announcing her campaign.

“But far too often across this state, we also share stories of struggle and neglect because politicians have forgotten about all but those who agree with them or fund their campaigns.”

McLeod joins a handful of Black women eyeing higher office through governorships and Senate seats, many inspired by Stacey Abrams’ gubernatorial campaign in Georgia in 2018 and Kamala Harris’ rise from California senator to vice president of the United States.

Abrams, meanwhile, is expected to make a second run for governor in 2022.

“We are normalizing Black women’s leadership (and) seeing Black women on every ballot so that it’s second nature for voters,” said Glynda Carr, co-founder of Higher Heights for America, which supports Black female candidates.

“I’ve been fighting the status quo for 10 years, and I’m still fighting, taking on the fights no one else will, even when I fight alone.” McLeod said Thursday, to a crowd that included state lawmakers.

“I want to welcome Sen. Mia McLeod to the race for governor and congratulate her on the historical significance of her campaign,” Cunningham said in a statement on Thursday. “Mia brings an important voice to this race, and I look forward to spending time with her on the trail as we make our case to voters.”

If she wins the primary, McLeod will face incumbent Republican Gov. Henry McMaster.

“I want to be the person that is running not because I’m a woman, and not because I’m Black, but because I am so connected to and so much like the people that I represent,” McLeod told the AP.

“It’s a tremendous responsibility, but it’s one that I’m excited about,” she added.

Have you subscribed to theGrio’s new podcast “Dear Culture”?