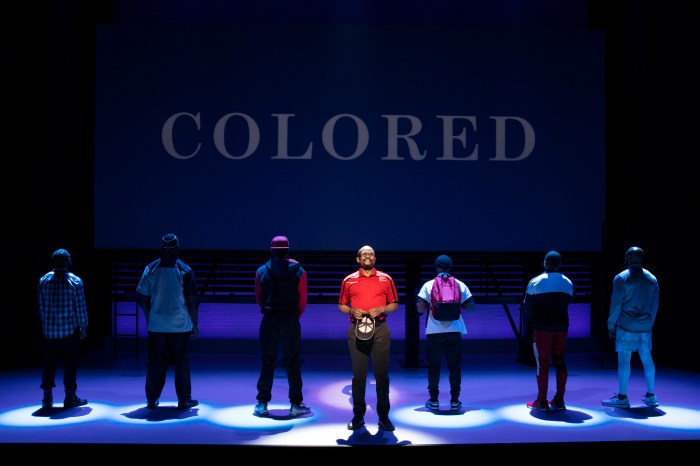 When Ron Simons was 39 and working at Microsoft, he decided to quit his corporate job to pursue his dream of acting. Simons had been an engineer and software developer to support his family. But in his heart, he had always wanted to be an actor.

So Simons quit his job and went to grad school for acting. The gamble paid off. Twenty years after making the leap from tech to entertainment, Simons is now a four-time Tony-winning Broadway producer whose credits include Porgy and Bess, Jitney and Ain’t Too Proud: The Life and Times of the Temptations. This season on Broadway, Simons is producing Thoughts of a Colored Man by Keenan Scott II and the revival of Ntozake Shange’s For Colored Girls Who Have Considered Suicide/When the Rainbow is Enuf.

Simons has also produced a number of films, such as Night Catches Us starring Anthony Mackie and Kerry Washington, and Mother of George starring Danai Gurira. His acting credits include Marvel’s The Defenders, and multiple episodes of Law & Order and its spinoffs. These days, Simons spends most of his time as CEO of his own production company, SimonSays Entertainment, scoping out new work. To use a theater term, this is a second act for Simons.

“It’s never too late,” said Simons from his office, where his Tony Awards are prominently displayed. “In terms of realistically changing one’s career, don’t ever let anybody tell you, ‘It ain’t so or it’s not possible.’ … Follow your dreams, follow your passions.”

Simons talks about producing with almost boundless enthusiasm. Because while the entertainment industry may be focused on stars, it is the producers working behind the curtain, funding the project and advocating for the work to be seen who enable a show to make it from inception to opening night.

“Producing is not like a consultant where you go in for three months, six months, and then deliver a paper, a project, whatever, at the end of it,” he said. Instead, it is an involved process that can take, as Simons exclaimed, “years!”

So why do it? Says Simons, “To me, it’s a higher power saying to me, this is what you’re supposed to be doing. I don’t do it to win Tony Awards or to get into Sundance. I do it because I love the story. And there’s a story that needs to be told that no one is telling. So if not me, then who?”

That question of, “If not me, then who?” is particularly important when talking about works by Black people and other marginalized groups, whose stories are usually considered too niche and overlooked because it is assumed they will not make money. Yet as more Black producers have entered the entertainment industry, their ascension has meant that works from a diversity of perspectives are finally being funded, and thus, finally being seen.

This season, there are now nine plays by Black playwrights being produced on Broadway (the newest addition is Shange’s For Colored Girls, which Simons is certain will be playing in spring 2022). Their presence is possible in part because of their producers, who advocated for those works to be on the biggest stage in America.

When it comes to Broadway producing, there are levels. First, there is the lead producer, the one who finances the upfront costs of a production such as early workshops and rehearsals. The lead producer puts together the marketing team and finds a theater. And crucially, they bring in other producers, who also contribute money. Then, there are co-producers who act as advisers and do some fundraising themselves. Finally, there are investors who are mostly hands-off.

If everything goes well and a show is successful, besides getting to go to opening-night parties and Tony Award celebrations, everyone who puts money in will receive a cut of the revenue.

In his previous Broadway ventures, Simons had been a co-producer, fundraising and advising, but not actively involved in the daily business of running a production. This season, with Thoughts of a Colored Man, Simons is debuting as a lead producer. For that show, he’s raised $1.5 million so far, since a Broadway show can cost millions of dollars even before its first performance. “I never raised $1.5 million before Thoughts of a Colored Man. I didn’t even raise $50,000.”

Simons learned how to be a producer by putting money in various Broadway shows and learning from the lead producers around him, while usually being the only Black face in the room. He attributes the lack of Black producers on Broadway to a lack of outreach — a producer’s job is to convince people in their network to invest money in their show.

“Long-term theater producers, who are mostly white, rarely went after Black dollars,” said Simons. “If you get someone to invest in a show, and they get the bug and they love it, they might want to continue and be a co-producer. And if they really love that, and they get some more ideas, then they can be a lead producer. But there was nothing in the pipeline [for Black producers].” He then repeats for emphasis, “There was nothing in the pipeline, the pipeline was empty. When I came in, I kind of pushed my way in, because I had access to capital.”

On Thoughts of a Colored Man, Simons is lead producing alongside Brian Anthony Moreland, making it the first play in Broadway history to be written, directed, starring and lead produced by Black artists.

The show is about seven Black men living in Brooklyn, New York, and follows them over the course of a single day. One pivotal scene is set in a barbershop, so the show’s team hosted community events in Brooklyn and the Bronx with a food truck, free tickets to the play and free haircuts. According to Simons, the community outreach and word-of-mouth are working. “I daresay about half our audience is Black,” he said proudly.

Besides making sure tickets are selling, Simons is also passionate about getting more Black producers on Broadway. And he’s not talking about stars such as The Handmaid’s Tale actress Samira Wiley, who is one of the co-producers of Thoughts of a Colored Man. He means people who don’t work in entertainment: “CEOs, vice presidents, people who are in medicine, people who are in law,” are some of the people who are investors in the show, said Simons.

For many, the thought of being a producer might sound like something only reserved for the elite. “A barrier to entry is ignorance that there could be a seat at the table for you,” he said. Simons has been mentoring a team of Black co-producers, encouraging them to reach out to Black investors. “There are now dozens of Black people who didn’t even know they could invest in Broadway, who are now Broadway investors,” he said.

The way to ensure that this season of nine Black playwrights is not a fluke is to foster Black producers, he said. They are the ones who will invest in future Broadway plays and musicals, and make sure that diversity in storytelling continues.

Diep Tran is a culture critic and editor based in New York City. Her writing has appeared in The New York Times, Washington Post, NBC News, American Theatre, and Backstage, among other publications. Her Twitter handle is @DiepThought.

After tough early-season loss, FAMU’s Rasean McKay is back to his winning ways — ThePowerBloc