NY Attorney General Letitia James reacts to Trump calling her ‘racist’ over lawsuit: ‘We will win’

Attorney General James’s fraud investigation into Trump, his family and the Trump Organization took a new turn this month after the Empire State’s top prosecutor subpoenaed the former president, his son Donald Trump Jr. and daughter Ivanka Trump to testify in a deposition. Since then, Donald Trump’s legal team has motioned to have Attorney General James’s lawsuit dismissed.

Trump has repeatedly called the AG’s civil suit, first launched in 2019, a political “witch hunt.” During a rally in Texas on Saturday, Trump repeated those claims and went so far as to call James and Fani Willis – the district attorney of Fulton County, Georgia who is probing Trump’s efforts to overturn the results of the 2020 presidential election – “radical, vicious racist prosecutors.”

Both James and Willis happen to be Black women.

In an exclusive interview with theGrio, Attorney General James reacted to Donald Trump’s public attacks on her and dismissed any suggestion that her office’s investigation is politically motivated.

“No one is above the law,” James told theGrio. “I pursue cases based on evidence, based on facts and based on an analysis of the law … the politics stop at my door.”

James acknowledged that Trump’s targeting of her investigation as a “political witch hunt” is based on previous statements she made about him during her 2018 campaign for attorney general.

In a court filing, the attorney general accused Trump of using “fraudulent or misleading asset valuations to obtain a host of economic benefits, including loans, insurance coverage, and tax deductions.”

“He will not evade us. He will not stop us from investigating into ensuring that individuals – no matter what title they hold – are following the law,” she told theGrio. “We will continue to investigate.”

She added, “I am confident that we will win.”

It was James’s high-profile court battle with the former president, among many other cases her office is overseeing, that led her to unexpectedly drop out of the race for New York governor to instead seek reelection for attorney general so that she could continue her work. 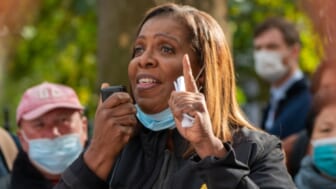 She added, “I followed my heart and I honored my commitment and the oath that I made that I swore to the people of the great state of New York that I would complete my work.

“I give it my all when I take on something, and there was no way that I could do both. And I do not believe in divided loyalties. My loyalty is to the residents of the state of New York and I’m going to finish my work.”

During a wide-ranging interview with theGrio, Attorney General James also addressed the wave of restrictive voting laws being passed in states across the country, including Georgia and Texas where The United States Department of Justice has filed lawsuits to combat voter suppression.

James said that even in the blue state of New York, her office has had to combat attempts to stop Black and Brown communities from exercising their right to vote.

“We’ve taken action against individuals in upstate New York who made robocalls to Black voters, basically telling them that the date to vote was in fact wrong … We’ve taken action against some officers in Rensselaer County – near the capital region, near Albany – individuals who basically would not place early voting sites in communities of color,” said the attorney general.

The former Public Advocate of New York said that on the state level, it is incumbent upon state attorney generals to take on efforts intended to stop communities of color from voting.

“It’s up to state attorney generals all across this state to defend the law and to ensure that individuals have access to voting, and that we take action to basically remove any and all barriers to that basic and fundamental right, and to remember all that we did and all of those who sacrificed their life, their blood, sweat and their tears to get us to this point.”

“It’s unfortunate that here we are, 50 some odd years after the passage of the Voting Rights Act, that there are individuals in Congress who are Democrats, who unfortunately do not want to defend the right to vote,” James said, adding, “Who do not want to protect the interest of marginalized and vulnerable populations. Who unfortunately are turning a blind eye and a deaf ear to voter suppression, which is happening across this country.”

The New York attorney general added, “We cannot and must not go backwards. The law is there and should be used both as a sword and as a shield to protect the basic right to vote. And no one should stand in our way.”