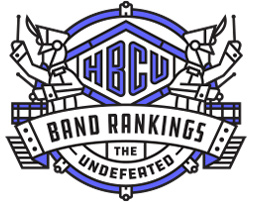 Who are the best HBCU bands in the land? We rate them and explain why in a series of rankings this season.

It’s time for this season’s second Undefeated HBCU Band Rankings, and we have a new top school in Division I: the North Carolina A&T Blue and Gold Marching Machine.

Florida A&M Marching 100 dropped one spot from the initial rankings to No. 2 and Jackson State Sonic Boom of the South jumped two spots to No. 3.

N.C. A&T Blue and Gold Marching Machine, which was No. 7 in the initial ranking, moved to No. 1 on the strength of top ratings for percussion and a top-5 placing in auxiliaries, drum majors, musicality, and pictures, drill and design. N.C. A&T isn’t a stranger to the top spot; the Blue and Gold Marching Machine finished the 2019 rankings as the top band in Division I.

“The creative aspect of marching entertainment truly sets the Blue and Gold Marching Machine within its own category of bands. We’ve always viewed the space between the end zones as our most important drawing board to allow ideas to reside and flourish,” said Kenneth Ruff, director of bands at N.C. A&T. “From themed shows, unorthodox musical selections, additional props, colors or uniforms, this area is sacred in our eyes and we do our best to entertain those in person and online at the highest level.

“Being recognized as a top HBCU band is an award given to the hardworking musicians and staff within our program. Each day, we all make individual sacrifices to push through various tasks and become better. Accountability and loyalty: That’s what fuels us to be our best.”

Benedict College holds onto its top ranking in Division II because it held a top spot for musicality and top-5 positions in drum majors, pictures, drill and design, and percussion.

“It is indeed an honor to once again be voted the No. 1 HBCU Division II marching band in the country. We accept and wear this title as a badge of honor,” said Wade Johnson, director of bands at Benedict College. “Each day, we strive to be better and consistent as we continue [to] build our musical legacy at Benedict College. The Benedict College Marching Tiger Band of Distinction is an organism that thrives on discipline and order. God has ordered our steps!”

“It is very important that people understand that our Undefeated rankings are based on individual field shows, which evaluate the areas of musicality, pictures, drill and design, percussion, auxiliaries and drum majors,” said Don P. Roberts, executive consultant for ThePowerBloc HBCU Band Rankings. “It’s possible that you can have one great performance and be No. 1 in each category, and possibly be completely out of the top 10 the next ranking because that particular show wasn’t as spectacular.

“Our HBCU rankings are meaningful to our bands and directors because our adjudicators are primarily present and along with a few retired SWAC, MEAC, CIAA, Division I and Division II band directors and choreographers who all give positive feedback as to how each program can improve. There is no greater accomplishment than to gain the respect from your musical peers through outstanding performances.

“I reiterate that our rankings are not a competition, but more so an effort to highlight the outstanding work of our HBCU bands by giving them a platform that showcases their talents worldwide through ThePowerBloc and ESPN platforms.”

“It is the love that we have for our university and the clear understanding that we do have standards and we care about students graduating,” said John Graham, director of bands at Arkansas-Pine Bluff. “We do demand a lot from them musically and physically and that they demonstrate good character.”

In the Division II rankings, multiple programs are on the rise, including Virginia State Trojan Explosion, Kentucky State Mighty Marching Thorobred Express and Savannah State Coastal Empire Sound Explosion, which are all making their first appearance in the rankings this season. Virginia State came in at No. 3, followed by Kentucky State at No. 4 and Savannah State took the final spot at No. 10.

“We are extremely honored to be considered amongst the best in the HBCU band world,” said Alvin Level, director of bands at Kentucky State University. “My students work extremely hard daily to produce quality shows. It’s great to be recognized and honored by my peers.”

For LeVelle Moton, playing the game of life means rebuilding his Idlewild neighborhood in North Carolina —