On a Saturday afternoon in October, in East Lansing, Michigan, two heated rivals will take the field at Spartan Stadium.

The Michigan State Spartans, with several thousand fans packing “The Woodshed,” will host their local opponent, the Michigan Wolverines. Separated by 64 miles, the two programs are steeped in history. This will be the 114th meeting between the football programs. Both enter this game undefeated.

For Michigan State, this game’s significance goes beyond the outcome, keeping pace in the College Football Playoff or beating a rival. A national TV audience will see Spartans head coach Mel Tucker operate on the sidelines, implementing his game plan.

They will also see a Black head coach, at a school with a Black athletic director, with a long history of African Americans in leadership. It demonstrates Michigan State’s place in the college football world for diversity and representation.

“People take a lot of pride in our football team, its history and tradition,” Tucker said in a call 48 hours before Saturday’s game. “It’s a family atmosphere, with authentic, down-to-earth relationships. When I was a graduate assistant in 1997, I was welcomed here. And I got that same feeling when I came back in February 2020. It was like coming home again.”

The principles, the values, the ideas that Daugherty projected then, still make up the fabric of the Spartans’ athletic program.

“Seeing Dr. Underwood come to practice and be a part of my life, I started to dream about the possibility of, ‘Wow, I could actually do that someday,’” Haller said. “Simply because of his representation, someone like me, who looks like me, could be an AD at MSU. That helped me dream bigger.”

Haller believes in creating a culture of excellence. Whether it’s on the football field, in the classroom or in society, Haller wants his athletes to succeed with integrity. 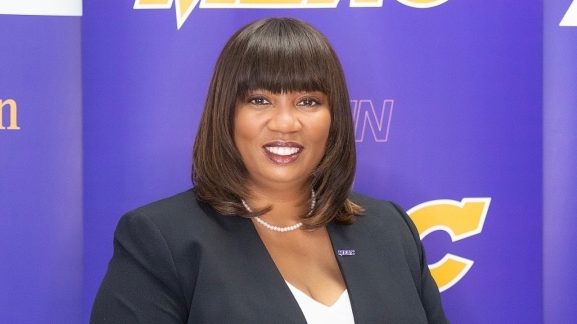 “We’re building the culture of excellence from the ground up,” Haller said. “We make sure that our staff is value centered, meaning we’re valuing our staff so that we can be in the best position to make sure our student athletes have the resources and support that they need.”

Tucker began as a graduate assistant on the football team with Michigan State before taking defensive back coach roles at Miami (Ohio), LSU and Ohio State. Tucker transitioned to the NFL, where he served as defensive coordinator for the Chicago Bears, Cleveland Browns and Jacksonville Jaguars. After a brief interim head-coaching stint with the Jaguars, Tucker went back to college as the defensive backs coach with Alabama, then Georgia. Prior to coming full circle as Michigan State’s head coach, Tucker led Colorado’s program in 2019.

Haller is pleased with how Tucker is leading the Spartans. Not only is it showing on the field with a 7-0 start to the 2021 season, but away from the game in how he approaches people.

“He’s creating a team environment,” Haller said. “Mel understands that all of these student-athletes are individuals that come from different backgrounds and experiences. For them to have success here, Mel is going to create structures that they can be successful in and take care of their needs individually.”

Redshirt sophomore Tre Mosley said Tucker gives him confidence to thrive on and off the field. From Pontiac, Michigan, Mosley was the No. 1-ranked wide receiver in the state coming out of high school. Due to the COVID-19 pandemic, Mosley preserved his redshirt season, playing only four games in 2020. In 2021, Tucker is giving Mosley a bigger role. This season, Mosley set a new personal best in receiving yards, currently at 321.

“Whether you are a walk-on or on the Heisman watch list, Coach Tucker is going to hold everyone accountable,” Mosley said. “He’s preparing us for the real world because there’s more to life than football — education, taking care of responsibilities as a young man and providing for your family.”

One focus for Tucker is connecting the football eras at Michigan State. Numerous alumni come back to visit the current players, thanks to Haller and Tucker’s leadership. Education and awareness are vital to understanding what Black players in previous generations went through. According to Tucker, these connections help the current team’s identity blossom.

“It was a priority for me to make sure that players from all eras, no matter when they played or what coach they played for knew that they were connected and welcome here,” Tucker said. “We’re going to continue to build on our connection with former players because they paved the way for us today, particularly with the integration of college football.”

The murder of George Floyd sparked protests around the world. College campuses wrestled with how to deal with the racial reckoning happening across America. Within the walls of the Michigan State football program, Tucker and the athletic leadership preached the importance of education. In November 2020, Michigan State athletics hired Dr. Ashley Baker to become the school’s chief diversity officer, working with staff and athletes to implement equity and inclusion outreach initiatives. From sharing educational materials on the website that highlight Michigan State’s diverse history to inviting a series of speakers and educating players on civic engagement at the local, state, and federal levels, the Spartans are continuing to fulfill their commitment to educating athletes and staff in the areas of diversity, equity and inclusion.

The players wanted to do more than just release statements after Floyd’s death. They wanted to participate in actions that affect meaningful change.

“They wanted to know what we could do and what we could do next,” Tucker said. “We make sure with our players that it’s not just about the X’s and O’s but developing the 360-degree person on and off the field in a diverse community and environment.”

As Tucker coaches Saturday, the visibility of a Black head coach at a Big Ten program cannot be understated.

From being the only Big Ten school to hire two Black head coaches (Bobby Williams, Tucker) and three Black ADs (Merritt Novell, Underwood, Haller), Michigan State presents a model for the rest of the football world in providing visibility for the best Black coaches and athletic directors.

“We want to be the example of what the country should look like in any industry,” said Michigan State director of player engagement Darien Harris. “If we can be that example of inclusion, and get to a point where it’s just the norm, then that means we’re really making an impact in society.

“I have a huge platform and a lot of visibility,” Tucker said. “I can lead from the front. I can also pay it forward you know, helping other Black coaches get to where they want to go in terms of sharing my experiences not just on winning, but how do you win? How do you compete, build a culture and maintain a standard of excellence in everything that we do on and off the field.”