Marvin Hagler was a throwback —

With the exception of his first name, which he legally changed to “Marvelous,” everything about boxing legend Marvin Hagler was a throwback, from his shaved head to his no-nonsense style of fighting.

Hagler did not have the benefit of participating in the Olympics to help kick-start his professional career, unlike Sugar Ray Leonard and many others who became media darlings. But he managed to rise through the ranks and became a boxing champion in 1980 after his 54th fight.

Fans grew to appreciate the self-made boxer, who would become one of the greatest middleweights of all time. He exercised a reign of terror over the division from 1980 to 1987. His 12 title defenses (11 by knockout) rank him third all time in the division behind Bernard Hopkins (20) and Carlos Monzon (14).

Hagler retired in 1987 after a still-disputed loss to Leonard and, despite attempts to lure him back for a rematch, remained retired. He became an actor and action hero in Italy.

Hagler died on March 13 in New Hampshire at age 66. The news was announced by his wife, Kay, on his fan club’s Facebook page. Details of the cause of death have not been released.

He’s survived by five children (Charelle, Celeste, James, Marvin Jr. and Gentry), all by his first wife, Bertha, whom he divorced in 1990.

Legendary promoter Don King said Hagler’s life is an example for many to live by.

“Hagler continued to fight for what was right, and that takes out the skin color, the creed, the religion and the language, it all comes down to manhood and he exemplified and illustrated that,” King said to . “He’s an example for young people to realize how high they can move up and get what you want if you want it bad enough.”

Hagler’s rise began shortly after his mother moved the family to Brockton, Massachusetts, from Newark, New Jersey, in 1967 after an uprising over police brutality left 26 people dead, many others injured and millions of dollars in property damage. Brockton was much different from Newark. It was an old blue-collar town with a small percentage of Black people and Latinos. Hagler adjusted. As a young teenager, Hagler joined a boxing club run by brothers Goody and Pat Petronelli, who would train and manage him for his entire amateur and pro career.

Hagler’s amateur career was outstanding. He won the national Golden Gloves title before turning pro in 1973. But the early part of his pro career was unspectacular. He fought in high school gyms and even in a television studio. He also fought many times in Philadelphia, a hotbed for middleweights in the early 1970s, and faced guys such as Bobby “Boogaloo” Watts, Willie ”The Worm” Monroe and Eugene “Cyclone” Hart.

Questionable scoring for Hagler by the judges began early in his career. His second fight against Olympian Sugar Ray Seales was ruled a draw, despite Hagler dominating the fight. And Hagler entered a period of losing two out of three fights in Philadelphia that many considered hometown decisions.

He’d go on to avenge those losses and his draw with Seales by way of knockouts. Hagler was clearly the division’s top contender by then, but he did not receive any calls for a title shot. The Petronelli brothers stood up for their fighter by writing to members of Congress from Massachusetts about Hagler not getting his fair opportunity.

“I received two letters, and it said Hagler had been deprived to fight for a title and if he didn’t get a title shot in the near future, they would have a congressional investigation into boxing and I’d be the chief witness,” Arum said to . “I didn’t want any trouble, so I worked out a deal with Marvin’s people.”

Arum promised Hagler a title shot if he got past his next opponent. After a technical knockout victory, Hagler fought Vito Antuofermo for the title in 1979 in his 50th fight. Hagler dominated the fight, but it was ruled a draw.

He’d get a second title shot four fights later in England against Alan Minter in 1980. The prefight and postfight took on ugly racial overtones. Minter, who was white, told reporters before the upcoming bout: “It has taken me 17 years to become champion of the world. I’m not going to let a Black man take it away from me.”

Minter claimed this was in response to Hagler not shaking his hand when introduced in the ring after Hagler’s draw with Antuofermo. Hagler routinely did not shake hands before fighting an opponent. He explained that it was to keep his edge.

Hagler defeated Minter at Wembley Stadium in London in a brutal, three-round assault that left the champion with deep gashes over each eye. Unfortunately, Hagler’s longtime goal was achieved under disgusting circumstances.

When the fight was stopped, a crowd of 10,000 booed, howled and rained the ring with beer bottles as Hagler’s team covered him with their bodies. The National Front, a far-right political party in Britain, chanted racist slogans. Hagler needed a police escort to escape the crowd.

Hagler followed that victory with his string of title defenses that included a rematch victory over Antuofermo, an exciting decision over Roberto Duran and, in one of the most action-packed bouts in boxing history, a knockout victory over Thomas “Hitman” Hearns. Hagler and Hearns put on an incredible display of fists of fury over three brutal rounds of violence.

The first round is considered the best round ever by boxing aficionados.

“I was tired after the first round,” said referee Richard Steele to . “I told myself that there was no way they can keep up this pace. But the second round was the same as the first.”

Hagler suffered a bad cut in the third round, and Steele briefly stopped the action so the ring doctor could take a closer look.

“The doctor said he could continue,” Steele said. “So Hagler looks at me and said, ‘I’m not going to let you stop this fight on a cut.’ ”

Hagler then buckled Hearns with an overhand right. A flurry sent Hearns to the canvas. Hearns made it back to his feet, but staggered into Steele, who stopped the fight.

“When Hagler landed punches, it was like bones were being broken,” Steele said. “He was a heck of a puncher.”

A year after Hagler destroyed the previously undefeated John Mugabi by 11th-round knockout, he signed to fight Leonard, who had come out of retirement after three years.

“Going the distance was a success,” said Leonard to . “The fight was close, it depends on how you saw the fight. It’s hard for me to talk about who [really] won the fight because he’s gone. To me, he’ll always be the champ.”

Discouraged by the loss to Leonard, Hagler retired, moved to Italy and became an actor. An offer of $15 million for a rematch could not entice Hagler to return. He was at peace.

In the book Marvelous: The Marvin Hagler Story, written by Damian and Brian Hughes, Hagler recounted the moment he knew for certain that he would not return to boxing. 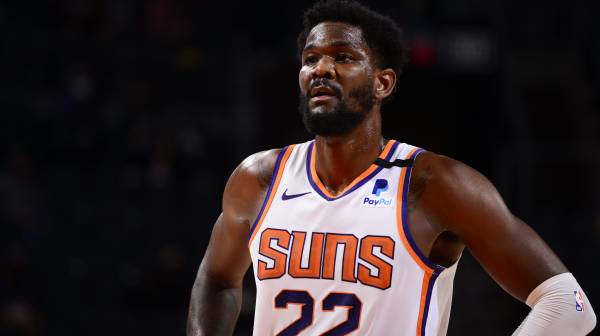 Deandre Ayton and the Suns are earning their respect Read now

“I was shooting my last scene in Night of Fear. We had traveled to Russia for the filming, and my character, after getting ventilated by bullets, was supposed to die. The director says, ‘Die,’ ” Hagler said. “Believe it or not, it was the hardest scene for me. I mean, how exactly do you die? Hey, I’ve never died. I’ve only lived.”