Some Democratic members of Congress are trying to hold up historic economic investments pledged by the Biden Administration, including a provision that could lower the cost of prescription drugs. By obstructing efforts to lower prescription drug prices, these legislators are standing in the way of racial equity.

In a December 2020 article, the Board of Directors from the Patients for Affordable Drugs Now called out the ways high drug prices perpetuate systemic racism.

“The barriers to and rationing of treatment resulting from high prescription drug prices are an integral part of how systemic racism plays out in health care,” read the article. “By consistently putting profit maximization ahead of public health, drug companies inflict the greatest pain on those who are most vulnerable — Black Americans and other people of color.”

According to the group, patient assistance programs are not a silver bullet as many exclude people without insurance. Noting that Black Americans are nearly twice as likely to be uninsured, the group says such programs are rarely helpful.

A similar report from the Center for American Progress further documented how the combination of the racial wealth gap and drug costs exacerbates health outcomes for Black and Latino people.

“Inequitable access and prohibitive costs have significant clinical implications, as Black and Hispanic Americans use fewer prescription drugs and face more severe chronic illnesses than white Americans,” read the report. “For example, Black Americans are more likely to die from high blood pressure, diabetes, HIV, and COVID-19 than white Americans. Moreover, they are disproportionately likely to have sickle cell disease, which can cost more than $3,000 per month to treat; notably, 80 percent of sickle cell patients do not receive adequate care and treatment.”

A diverse group of legislators penned an op-ed for the Washington Post highlighting the importance of lowering drug costs. “We represent a geographically diverse share of the American people — but in each of our districts, we hear a collective concern,” opened the op-ed. “The high cost of prescription drugs is hurting families — and it is long past time to bring those prices down.”

Polls in recent months have shown Americans, including those identifying as Republicans, support allowing the federal government to negotiate lower drug prices.

Speaking with MSNBC host Joy Reid, Rep. Mondaire Jones called out his conservative Democratic colleagues holding up progress with alleged objections to lowering prescription drug costs. Jones questioned who his colleagues were looking out for by opposing the federal government’s ability to negotiate prescription drugs.

“When you see people opposing simply the ability of Medicare, the federal government to negotiate down the price of prescription drugs, something that is supported, overwhelmingly by both Democrats and Republicans, it’s clear then that people aren’t playing district politics,” Jones explained. “They’re not looking out for the folks in their district.”

“Let’s be clear.” Jones began. “The vast majority, nearly all of House Democrats are in support of this President’s broadly supported economic agenda. It is an agenda for the people.” 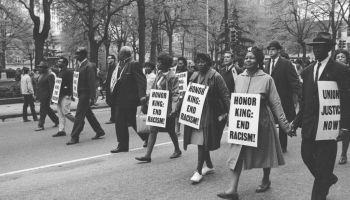