An old song has been given new life after Kentucky Attorney General Daniel Cameron defended a grand jury’s decision to bring charges that have nothing to do with the actual police killing of Breonna Taylor. The decision led to angry protests around the country, but not all of them have come in the form of demonstrating in American streets: At least one protest came in the form of a song that gained new relevance from the developments in Louisville, thanks to a viral tweet.

But that song — “Look At The Coons” — was given what appears to be a new video treatment, complete with images of Cameron — a Black Republican and avid supporter of Donald Trump who has been described as Mitch McConnell‘s “protégé” — accompanied by a veritable who’s who of other Black people who have followed in that same political vein.

The video has been shared tens of thousands of times on Twitter after fired Louisville cop Brett Hankison was arrested and charged with three counts of wanton endangerment for shooting into the apartment of one of Taylor’s neighbors — white people. But the shots that went into the apartment of a Black family somehow did not factor in the charges, just like Taylor’s own killing. Both were beside the point of the grand jury’s indictment, bringing into question what exactly Cameron presented to the panel for it to reach this conclusion. Cameron said the police shooting and the indictment were “justified.”

All of which brings us back to “Look At The Coons,” which is performed by an artist named KenstraMentalz Keyz and was first uploaded to SoundCloud in 2017. It was later added to Apple Music this past June. But the catchy funk-inspired tune seems to have really taken off in the past 24 hours after Cameron’s press conference during which the attorney general seemingly blamed Taylor’s killing on her own boyfriend’s attempt to protect them both from what he believed were burglars trying to break in.

Cameron was already a reviled figure for being an active and willing participant at the Republican National Convention, but Wednesday’s announcement worsened the situation for him. However, the social media video for “Look At The Coons” served as a reminder of sorts that Cameron and the viewpoints he proudly espouses are shared by many other prominent Black conservatives who want to see Trump win the 2020 election.

They include notable fixtures in the sunken place like the late Herman Cain, Herschel Walker, Kanye West, Terry Crews, Stacey Dash, Ben Carson, Jim Brown, Ray Lewis, Pastor Darrell Scott, Diamond and Silk and, of course — since no list of sunken Black folks would be complete without her — the one and only Candace Owens.

But it’s the song’s lyrics that may cut deepest. Some of them include KenstraMentalz Keyz harmonizing about how “we live in a system of devils and white supremacy” before the hook comes in and repeats, “look at the coons.”

Take a look at the video below.

For the initiated, Merriam Webster describes the word “coon” as “offensive” and defines it as being “used as an insulting and contemptuous term for a black person.”

Urban Dictionary went several steps further and offered multiple definitions like: “A black person who is ignorant to white discrimination and unknowingly suffers with self hatred,” and “A black man who only dates white women or only find white women attractive.”

Congrats to Attorney General Daniel Cameron for getting engaged, but I thought he said he and his office were working “around the clock” to investigate Breonna Taylor’s case? I guess since her name isn’t trending anymore he forgot he was working nonstop. #JusticeForBreonnaTaylor pic.twitter.com/BimlcR2jSa

The song was going viral Thursday as Trump tweeted a video of a Black man professing his devotion to the president.

KenstraMentalz Keyz wrote on his SoundCloud page what exactly the song is about: “The negro race traitors who go out of their way to regurgitate talking point of suspected racist man and racist woman should be acknowledged and excommunicated.”

The fact that the years-old song became so popular immediately after the Breonna Taylor grand jury decision was announced is open to your own interpretation. 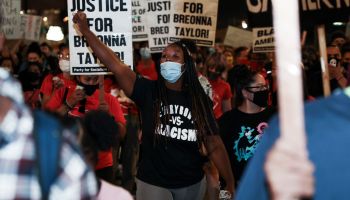