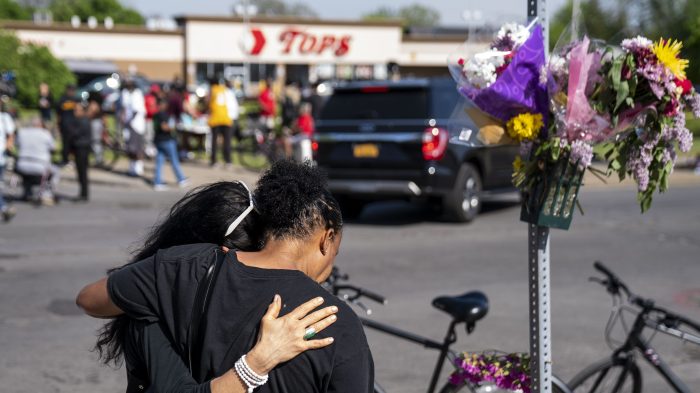 I wish Jacksonville, Florida, was better at press coverage.

Maybe if the folks at TIAA Bank Field could jam up white supremacy at the line of scrimmage, we wouldn’t hear about Confederate flags flying in pregame airspace, or antisemitic messages flickering off stadium walls.

When I read about an aircraft with that hateful flag and a banner that read “PUT MONUMENTS BACK,” it was a reminder of my own rebuke of post-Civil War monuments. Five years ago, I challenged city officials in my town of residence to remove a white supremacist monument that honored a man involved with the Hamburg Massacre, in which six Black men were killed by a white mob in Hamburg, South Carolina, in July 1876, leading up to the last election season of the Reconstruction.

Of course, the problem of white supremacy isn’t just limited to Jacksonville, or South Carolina. It’s a worldwide phenomenon that just happens to be one of America’s staple crops.

A common misconception is that white supremacy only affects Black people, which was notably disproven a month ago at the same stadium. “Kanye was right about jews” was the message that was projected during the Georgia-Florida football game, which presented the paradox of a Black person who decided to propagate whiteness.

All of it makes me angry, alert, assertive. I certainly understand the irony of why football games might provide safe haven for supremacist activity, despite the reactionary messages from football representatives. Football is a game that prides itself on aggression, collision – and exploitation. The more we analyze the dangers of the sport in terms of physical, mental and spiritual damage, the more we see its lack of conscience.

Truly, poor perspective is the heart of the conflict. It’s how, Jacksonville, located in Duval County, which was named for an antebellum governor, and has a 2-to-1 ratio of white to Black residents, some people might call for the return of monuments to intimidation and death.

It’s time to call white supremacy by its nameRead now

The reason I called for the removal of the monument in my town was simple – the Hamburg Massacre was a response to Black folks’ push for civil rights and equity in the aftermath of the Civil War. The massacre adjacent to where I live now was the start of a series of events that effectively ended Reconstruction and ushered in the period we commonly recognize as Jim Crow. It’s bad enough to want to retain the legacies of something as anti-American as the Confederacy. It’s entirely anti-Black to engage in revisionist history that whitewashes the violence waged on Black people.

Education might be the solution for lack of conscience, but the same folks who want to return or retain Confederate monuments are the same folks who are passing “anti-CRT” measures in schools. For those of us who understand who lawyer and civil rights activist Derrick Bell was and what critical race theory really means — it’s actually an academic framework dating to the 1970s that centers on the idea that racism is systemic in the nation’s institutions and that those institutions maintain the dominance of white people — it is a self-fulfilling prophecy. Progress met with pushback takes civil rights back to the line of scrimmage.

With that said, the tug-of-war between Black liberation and white supremacy isn’t the most aggravating conflict. It’s the decided inaction that has come after the summer of discontent in 2020. The gains that were promised to Black people – whether it be about monuments or more monumental gains such as equity in wealth, education and health care – have been largely unfulfilled.

There is a Confederate monument in Jacksonville, in Springfield Park, which speaks to this frustrating standstill. The city chose to cover a monument to the Women of the Southern Confederacy movement, with the intent of taking it down, yet the monument remains.

I think we should engage less in deliberation, and be more deliberate when it comes to white supremacy. Seven months ago, I wrote that we should call white supremacy by its name in the aftermath of the tragic shooting at a supermarket in Buffalo, New York. Calling it by its name isn’t enough. If the historical response to reconstructions, whether post-Civil War, or during the civil rights movement of the 1960s, or even after the murder of George Floyd by a police officer, is white violence, then the message should be clear to every one of us.

We need to create an atmosphere, a country, a world where people never feel comfortable enough to fly Confederate flags or speak hateful rhetoric. When it comes to systemic racism, I don’t want them to gain another yard.

Ken J. Makin is a freelance writer and the host of the Makin’ A Difference podcast. Before and after commentating, he’s thinking about his wife and his sons.