Leon Spinks was a fighter until the end —

The words coming from the opposite end of the video chat on Feb. 3 were barely audible. But Cory Spinks, whose eyes began to puddle with tears, leaned forward, craving for more precious moments with his hero – his father, former heavyweight champion Leon Spinks.

“He was on a breathing machine, but he managed to say that he loved me,” said Cory Spinks, an undisputed welterweight champ from 2003 to 2005, and IBF junior middleweight titleholder twice between 2006 and 2010. “I prayed and continued to talk with him, but I began to weep and got off the phone.”

Cory Spinks received a call two days later that his father was taken off life support.

The elder Spinks, 67, died on Feb. 5 in a Las Vegas hospital after a long battle with prostate cancer that spread to his bladder. His wife, Brenda Glur Spinks, was at his side. He’s also survived by his son Darrell and grandson Leon III, who were also fighters. His son Leon Calvin was killed in a shooting in 1990.

Leon “Neon” Spinks lived a life where he overcame the odds. He became an Olympian and professional champion in a victory over an icon. He had a brand before we knew about brands when he displayed a signature gap-toothed smile (he was missing two front teeth). He had such a precarious, carefree life that he became a constant punchline. Even the great comedian Richard Pryor couldn’t resist with a five-minute skit about Spinks on his Wanted: Richard Pryor Live in Concert (1978) album:

Spinks and his six younger siblings were raised by his single mother Kay. He was an anemic child who was bullied and grew up in the infamous Pruitt-Igoe low-income housing project in St. Louis that was so menacing the city dynamited all 33 identical 11-story buildings in 1972.

And when his estranged father did bother to appear, Spinks had to face even more ridicule.

“My dad had gone around and told people I would never be anything,” said Spinks in an interview 40 years ago. “It hurt me. I’ve never forgotten it. I made up my mind that I was going to be somebody in this world. Whatever price I had to pay, I was going to succeed at something.”

Early steps to success began when Leon and his brother Michael learned how to box at a nearby recreation center to protect themselves from bullies.

Spinks quit high school in 10th grade and worked as a welder before he joined the Marines and began an amateur boxing career, where he became a three-time national AAU light heavyweight champion. He won 178 of 185 fights, with 133 knockouts. The Marines, often tough for the free-spirited Spinks, helped mold him.

“He was very proud of being a veteran,” Cory Spinks said. “You could never catch him without his Marine cap. The Marines changed his life, especially when you look at where he came from.”

Leonard, a Hall of Famer, became this country’s darling during the Montreal Games. With the position of team captain came the responsibility of waking up Spinks and his teammates for early daily runs.

“Now granted, I was cool with Leon and he was a funny guy,” Leonard said. “But when I’d wake him up, he’d have that look in his eyes where you’d think to yourself that you’re in the wrong place.”

It was likely Spinks was exhausted due to some routine late-night shenanigans.

“We had a curfew to be in the bed around 9, but Leon would be up until at least midnight,” said Randolph, Spinks’ roommate. “He’d watch TV, play pool and then he’d come creeping in. But when it was time to get up and work out, he’d do what he was supposed to with a strong hunger and drive.”

Spinks faced Cuba’s Sixto Soria in the Olympic finals. He advanced to the finals with victories over heavily favored Eastern Europeans in the earlier rounds. Soria, who had stopped three previous opponents, was more experienced and polished. It didn’t matter. He quickly discovered he couldn’t stand up to Spinks’ ferociousness.

In the final bout of the Olympics, Spinks scored big with a knockdown late in the first round. He continued to throw a barrage of punches in the second, and the official stopped the bout in the third when Spinks’ right hand sent Soria to the canvas.

Spinks turned pro shortly after the Olympics and debuted with a fifth-round TKO over Bob Smith in Las Vegas. Even at that time, Spinks was small for a heavyweight at 6-foot-1 and 197 pounds, but he made up for his size with bad intentions by throwing punches in bunches.

“Leon had the biggest heart and the biggest balls,” said Leonard, who would win six world titles as a pro. “He had one reason to get into the ring, and that was to take you out.”

And he did in those first few fights. Following the TKO in his debut, Spinks knocked out his next three opponents in the first round. It took him three rounds to knock out Bruce Scott in his fifth fight. The KO streak ended in a highly contested draw against Scott LeDoux in fight six. Spinks next won a unanimous decision in a 10-round fight over Alfio Righetti to improve his record to 6-0-1.

Talk began several weeks later about champion Muhammad Ali’s next opponent. Two months before Spinks defeated Righetti, Ali had a brutal 15-round fight with the sledgehammer hitting Earnie Shavers. Ali buckled several times during the fight from devastating blows. But Ali dug deep and rallied behind a historic 15th round and solidified the unanimous decision.

Ken Norton, who Ali had already fought three times, was next in line for a title shot. But Ali, still weary from his bout with Shavers, wanted a less taxing next opponent.

Enter Spinks with only seven professional fights and an unimpressive victory in his previous bout. Although it was a huge name in Ali, and Spinks was coming off the Olympics, which usually meant gold in those days, it was a hard sell and only one network, CBS, bid for the television rights.

Heading in, the bout was such a mismatch that Spinks’ good friend Eddie Mustafa Muhammad, who defeated Jesse Burnett by KO on the undercard, left the arena following his fight.

“I gathered my things after my fight and left because I thought, like everyone else, that Ali was going to beat him easily,” Muhammad said.

Spinks holds the distinction as the only boxer to take a title from Ali in the ring.

Leonard watched the fight on television with friends and family in Maryland.

“I cried after that fight for two reasons,” Leonard said. “Ali was my idol and I was happy for Leon. I believe it was only one person who believed he’d win, and that was Leon.”

Unfortunately, winning that title came with a cost, and Spinks began to pay dearly. A month after the fight, Spinks was stripped of his WBC title for refusing to defend it against Norton. He instead agreed to fight Ali in a rematch and defend his WBA title.

Before the rematch in September 1978, Spinks went on a spending spree that included cars, houses, jewelry and the hiring of bodyguard Laurence Tureaud, best known as Mr. T. Spinks had to deal with other pressures associated with fame, such as conflicting advice from family members and associates and the new demands on his time. He also had several issues with the law.

“It’s a double-edged sword,” Leonard said. “You win the title against the greatest of all time and you’re going to celebrate a lot. It’s not that easy [to be disciplined] when you pocket more money than you’ve ever had.”

With the money also came a different focus for the rematch. Spinks didn’t train as well. He’d disappear from camp for days, participating in the party life. There was so much chaos in his camp that during his rematch with Ali, one of his handlers, George Benton, left his corner and went into the locker room during the fight because so many voices were in Spinks’ ear.

A rejuvenated Ali, who gave Spinks a boxing lesson for 15 rounds, regained his crown in a unanimous decision. It was the fourth time Ali had defeated an Olympic gold medalist (Floyd Patterson, Joe Frazier and George Foreman).

“Fighting Ali changed his whole life,” said former heavyweight champion Larry Holmes of Spinks. “After he won it seemed like he didn’t care as much anymore. But in the second fight, Ali trained and worked and fought a good fight.”

The good moments for Spinks following that second Ali fight were few and far between. He suffered a TKO in his next bout, but managed to rally from that defeat with three wins and a draw to set up a shot at the title in 1981 against Holmes.

It wasn’t close. Referee Richard Steele stopped the punishment and Holmes won by a third-round TKO.

Later that year, Spinks was hit over the head and robbed in Detroit. The attackers stripped off his clothes and left him in a hotel room minus his jewelry, fox coat and gold dental plate. Spinks said in an interview: “I was trying to bite the muggers and [my teeth] came out, and he stole them. It’s so damn weird, people taking my teeth.”

But Spinks continued his career. He eventually moved down to cruiserweight and failed in his attempt at the crown in a TKO loss to Dwight Muhammad Qawi. He fought for the final time in 1995 and ended his career at 26-17-3.

From there, Spinks made a living from the memorabilia circuit and other odd jobs. He was later part of a group of former fighters who had their brains studied by the Cleveland Clinic Lou Ruvo Center for Brain Health in Las Vegas. It found Spinks to have brain damage caused by too many blows to the head combined with heavy drinking. 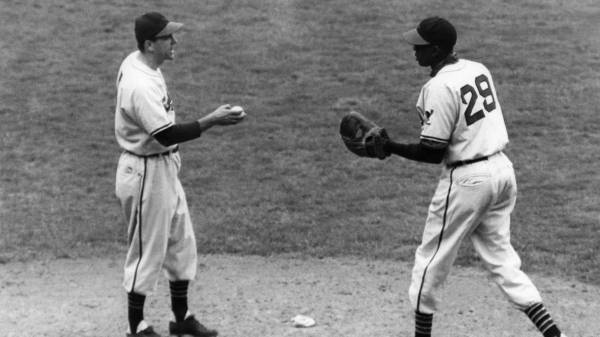 In 2019, Spinks was diagnosed with prostate cancer. Until his death, he used a wheelchair and ate through a feeding tube.

But Spinks’ physical limitations during his final days will not become a lasting memory for those who knew him best.

“My dad was one of the strongest men I knew,” Cory Spinks said. “I didn’t think he was going to make it out of last year. I’m amazed he made it as far as he did. He kept fighting.

“He was a fighter from the start until the end.”

Trump was nearly placed on ventilator amid battle with COVID-19 : ThePowerBloc

What you should know about Black impeachment managers prosecuting Trump