Fans of New York rapper Pop Smoke had to, unfortunately, bear with his senseless murder last year on February 19, 2020, just a week after he released the deluxe edition of his Billboard 200 top 10 mixtape, Meet the Woo 2.

Now, those same fans and loved ones are having their emotional wounds reopened once again after recent reports confirm his gravesite at Green-Wood Cemetery in Brooklyn was extremely desecrated over the weekend.

TMZ exclusively broke the news of a Saturday morning act of vandalism, which resulted in not only Pop Smoke’s crypt getting smashed but even evidence that crooks tried dragging his casket out as well. The marble plaque that displayed his full name, Bashar Barakah Jackson, was broken through completely, and his place of rest was disrespected even further with a litter of used joints and flowers scattered around the wreckage. Authorities say there were no cameras in the area, but they are investigating the vandalism. There have been no arrests made.

Take a look at more details on the heinous condition of Pop Smoke’s mausoleum after it was desecrated, via TMZ:

“The worst part is that there seems to be drag marks left on the ground … and another shot of what we’re told was right across from the mausoleum appears to indicate the perps might’ve actually gotten into Pop Smoke’s tomb … either pulling something out, or trying to.

The eyewitness tells us this door-looking thing seemed to be a concrete slab that would presumably sit over PS’s casket, separating his body from another right above him. The black rectangular object, we’re told, also looked to be part of Pop Smoke’s wall enclosure.”

As of yesterday afternoon, hours after the vandalism was first discovered, Pop Smoke’s damaged plaque has been replaced with a blank slab and the leftover debris swept up accordingly. Security says they had no idea that it happened until the initial Saturday morning report by an eyewitness.

Take a look at photos of damage done by the crypt crooks below,  and keep the family of Pop Smoke in your prayers as they deal with this situation:

Why Was Pop Smoke Killed? Jealousy And Envy In The Rap Industry Is Brought To Light 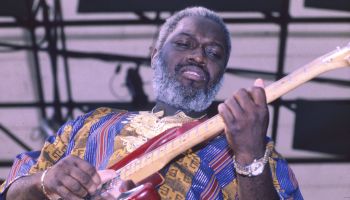