Kobe Bryant stood out among the high school Class of ’96 —

I was playing NBA 2K21 with my son Malcolm, and I was the all-time Los Angeles Lakers. My lineup was ridiculous. Shaquille O’Neal and Kareem Abdul-Jabbar down low, LeBron James at the 3. Kobe Bryant at the 2. And Magic Johnson at the point. Malcolm was running with the Milwaukee Bucks and abusing me with Giannis Antetokounmpo. But during the game, he said, “They make Kobe too good. I know he was nice, but dang.”

Then he asked, “He was your high school class, right? Class of ’96, so you played against him. Was he just nice like that his whole life?”

I told him Kobe was nice for a few reasons: He worked out harder than anyone I had ever seen in my life; his concentration and focus was on a whole different level even at a young age, he was a student of the game and he studied tape, and he wanted to play like Michael Jordan, so he copied and perfected all of his moves. He just had that Mamba mentality way before it became his mantra.

Tim Thomas was in our class. In high school, Thomas was actually ranked ahead of Kobe. He was bigger, stronger and could play every position on the floor. But Thomas soon found out Kobe was different.

“What sealed the deal for me was the McDonald’s All American game in ’96,” Thomas said. “His approach was completely different. In an all-star game, you’re gonna go hard, but you’re not gonna go as hard. So the practice is gonna be where you just wanna get the sets, and kind of go through it. They didn’t really want guys to get hurt. Just get in, get out. But Kobe was on 1,000. He wanted to show everyone that he was the best player in the class. We were going through the drills and everyone else is walking through it and he’s going full throttle, dunking the ball, boom, boom, boom. So we all kind of knew at that moment: This guy is different.”

He set the tone for the rest of the class that day.

“When the game started, everyone knew not to come out and treat it like another all-star game,” continued Thomas, who went on to play 13 seasons in the NBA. “If you don’t bring it, you may be embarrassed because at least one guy is definitely bringing it.”

Mike Bibby remembers that game, too. Bibby was one of the top guards in our high school class.

“You could tell his work ethic was second to none at that age,” Bibby recalled. “You could tell he was loaded with confidence. Going out there and knowing he was the best player on the court every time he stepped out there.

“You would’ve thought he was a pro back then.”

Bibby says watching Kobe back then was like watching a young MJ.

Bibby would go on to play 14 years in the NBA and had many memorable battles with Kobe’s Lakers. He said Kobe was the hardest worker he’s ever seen.

“To be on top of the game like he was and still work like he did, it’s something you don’t see even back then, even nowadays,” Bibby said. “You get a lot of guys who are at the top of their game and they kind of start coasting, taking it easy. I did it. I felt sometimes I could take the day off, but he never did that. … People were going out, he’s in the gym.

“His will to win was tough to match.”

Mateen Cleaves, also a member of the ’96 class who played in the aforementioned McDonald’s game, remembers that same mentality during an NBA preseason game.

“To understand the Mamba mentality, let me tell you this story,” said Cleaves, who won a national championship with Michigan State and played six seasons in the NBA. “I’m playing against Kobe in the league, and I was playing with another superstar player – I won’t say his name – that made a comment about Kobe being selfish. So we’re playing the Lakers in preseason. And you know, top players in preseason, it’s just to get a little sweat. Get up and down a little, find your rhythm. Kobe told this guy before the game, ‘I’m coming at you.’ And it’s preseason. So I’m sitting there like, ‘Uh-oh, this about to be good.’

“And I’m telling you, the first 10 plays, Kobe went at this guy so hard Phil Jackson had to take Kobe out, because he was going playoff speed, in preseason, just because a guy made a comment about him before the game. He was just different.”

When I entered the league in 2000, I finally witnessed firsthand what the Mamba mentality was all about.

Kobe and I had the same agent, Arn Tellem, at the time (this was before he made the switch to Rob Pelinka, but Rob was still one of the agents under Arn). I was sitting in Arn’s office in LA talking about plans to work out for the summer. Kobe had just finished signing about 100 basketballs, walked by and heard us talking.

He had been in the league for four years by then, and I wasn’t even officially a rookie yet. He told us about pickup games at UCLA and the sand dunes we should definitely do. Then he told us about his regimen in the offseason. He would go to sleep around 10 or 10:30, sleep for a few hours, get up and work out, go back to sleep around 4 a.m. for a few hours, get up around 7 a.m. and work out again. That way he could get extra workouts in throughout the day and didn’t have to waste time sleeping through the entire night. Honestly, at first I thought he was joking, but he was all the way serious. 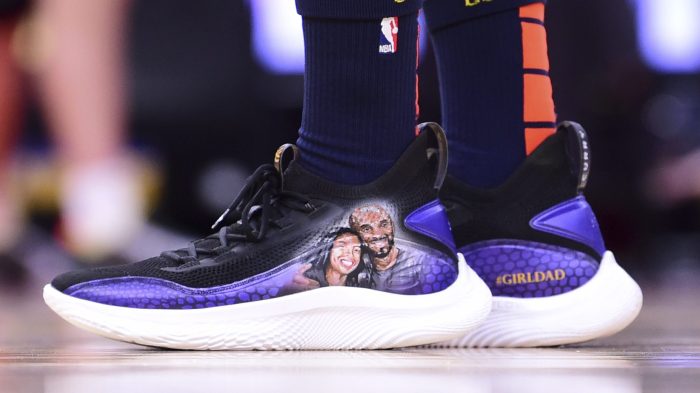 When I told my son this story, he looked at me like it was the most ridiculous thing he had ever heard. I have to admit, if I wasn’t there to hear it myself, I would’ve thought it was pretty far-fetched too, but that’s what Kobe said. And Pelinka backed his story and told me, “Yup, that’s his regimen in the offseason.”

I didn’t pick up his offseason program – I did not have the Mamba mentality to work out at 1 a.m. – but the message was received.

Kobe became what he became because of that mentality. That’s what pushed him to never be satisfied no matter how many awards and accolades he received. To always feel the need to prove himself. To outwork everyone no matter what the situation. To step up to every challenge no matter how big or small.

We had a supertalented high school class, which also included Jermaine O’Neal, Shaheen Holloway, Richard Hamilton, Stephen Jackson, Jason Hart, Ed Cota, Kenyon Martin, I could keep going. But there’s only one Black Mamba, and it was an honor to have come out of the same high school class that produced Kobe Bryant.

Rest in peace, Kobe aka the Black Mamba.

Etan Thomas is a senior writer for basketballnews.com and is the host of a podcast called The Rematch. He also writes for The Guardian and has previously written for The Washington Post, Huffington Post, CNN, ESPN, Hoopshype.com and slamonline. He frequently can be seen on MSNBC as a special correspondent for “hot topics.” and co-hosts a weekly local radio show on WPFW 89.3FM, The Collision, where sports and politics collide.

Tim Duncan’s Hall of Fame career has made the U.S. Virgin Islands proud —