A city councilmember in Los Angeles was shown on video violently attacking a Black activist at a holiday party on the same day he returned to work after nearly two months following a racist, anti-Black scandal.

You can’t make this up.

Kevin de León, who was previously exposed on a secret audio recording featuring racist comments about Black people and apparently plotting to suppress Black political power in Los Angeles, “assaulted local organizer Jason Reedy,” according to a tweet of the video posted on social media by RootsAction, a progressive group of activists promoting social justice.

The assault came during a holiday party on Friday night, and despite damning video footage, de León is insisting he was the victim.

It also happened hours after de León was confronted by Reedy during his first city council meeting since he and two other co-workers were caught in a conversation that called city council member Mike Bonin’s young Black son a “monkey.”

De León said he was simply defending himself, but onlookers said that wasn’t true.

“This evening a staff member, volunteer, and I were violently and physically assaulted by self-proclaimed activists at a community holiday event to the dismay of a multitude of families and children who were there to celebrate a Christmas tree lighting and to receive toys and food,” de León said in a statement Friday night. “The escalating rhetoric is hitting a fever pitch, transcending from verbal threats into actual acts of violence and must end before more serious harm or loss of life occurs. Violence is not free speech and has no place in politics or democracy.”

A series of tweets claimed that this type of behavior is par for the course for de León.

“This is not the first time that Kevin De Leon has put his hands on an organizer and lost his temper. This is who Kevin is,” said one tweet that demanded his resignation.

Another tweet called for de León to be arrested.

Earlier in the day, de León returned from his self-imposed hiatus since now-former L.A. City Council President Nury Martinez resigned in disgrace after a secret audiotape revealed in October that she referred to Bonin’s son as a “monkey” during a conversation that included de León and Councilmember Gil Cedillo and Los Angeles Labor Federation President Ron Herrera.

The four traded comments with de León claiming Bonin treats his Black son like an “accessory.”

Or, as LA Weekly put it:

Within the hour-long leaked recording, de León could be heard engaging in conversations that pertained to Councilman Mike Bonin’s adopted son, who is Black, jokes about his Oaxacan constituents, and redistricting conversations that sparked an investigation by the California Department of Justice.

On Friday, Bonin called de León a “vile racist” and repeated calls for him to resign.

De León was formally and unanimously censured by the city council in October but has resisted persistent calls to resign.

In the immediate aftermath, de León offered what his critics called a hollow apology.

He later added, notably: “I have to do the hard work to repair the ties with my brothers and with my sisters in our African-American community.”

It was in that context that de León was shown violently assaulting Reedy on Friday night.

The fight came just days after a recall petition against de León was approved by the L.A. City Clerk. The approval means that de León will be subject to a recall election if the petition garners more than 20,000 signatures from registered voters by March 31, 2023. De León has previously faced two unsuccessful recall efforts.

Martinez resigned weeks after the scandal broke while Cedillo remains a member of the city council. 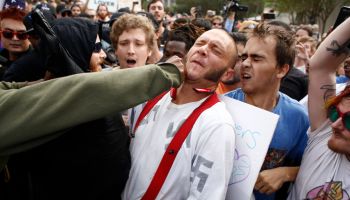 LeBron James is creating a legacy – in Hollywood — Andscape

Cast Your Vote in our 2022 Readers’ Poll