Keke Palmer Reminds Everyone That She Stays Booked And Busy

Keke Palmer took to Twitter to set the record straight Sunday after chatter about her amazing performance in “Nope” led to questions about why she “wasn’t more successful.” Some on social media compared her to another child star turned successful adult actor, Zendaya.

But Palmer made it clear that she has been thriving since stepping into the Hollywood game at 11. Recounting her accolades, Palmer noted she was the first Black woman to play Cinderella on Broadway and has over 100 credits.

“I’ve had a blessed career thus far, I couldn’t ask for more, but God continues to surprise me.”

She also shut down what she viewed as the “real colorism” in comparing her to anyone else. Her reflection on her success is all that matters.

The rundown of her resume also served as a warning for those calling “Nope” Palmer’s breakout role. As Palmer said, her work stands on its own. From “Akeelah and the Bee” to “True Jackson VP.” Keke Palmer has long been a household name.

She also served as an inspiration to other actresses, including “Black Panther” star Letitia Wright. Wright has previously said that Palmer’s work in “Akeelah and the Bee” inspired her to act.

In 2019, she joined “Good Morning America” in its third-hour block “Strahan, Sara & Keke” after a guest hosting stint. The show was unfortunately canceled early in the COVID-19 pandemic. This follows It’s about time the media industry stopped treating people as only having made it once they are “white famous.”

There is a whole world outside your limited worldview, and you are missing out. It’s not the other way around.

As reported by Global Grind, Palmer and her onscreen brother Daniel Kaluuya shared what it was like playing an alien-fighting sibling duo in the new film. According to Associated Press, “Nope” debuted at number one, earning $44 million. The movie pays homage to sci-fi classics such as “Close Encounters of the Third Kind.”

More below from Global Grind:

When we congratulated Palmer on her journey in acting, hosting and producing content, she responded with gratitude. The all-star actress has remained booked and busy, and we praised her for the variety of roles she has been able to take on in recent years. Palmer discusses how much she enjoyed working alongside Peele, Kaluuya, Brandon Perea and Steven Yeun to bring the horror and sci-fi film “Nope” to life.

The onscreen sibling duo was able to trade sibling roles in the film. Keke plays the younger sister, and Daniel portrays the eldest brother. In real life, Keke is actually the middle child. Meanwhile, though hard to find personal information about the award-winning actor, Daniel has an older sister. This was new news for all of us, including Keke, his onscreen little sister. 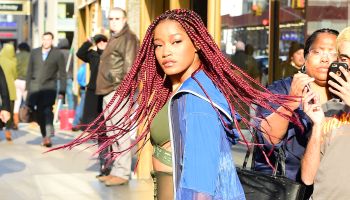