Joe Rogan has addressed critics of his repeated use of the N-word on his now-infamous podcast. He said in an Instagram video on Saturday that he is not racist and thought the N-word was acceptable for him to say “as long as it was in context.”

After a video compilation of Rogan, who is white, saying the slur multiple times surfaced Jan. 30, the podcaster and UFC commentator said he “never used it to be racist” and now realizes that “to most people, there’s no context where a white person is ever allowed to say that word, nevermind publicly on a podcast.”

“I haven’t said it in years, but for a long time, when I would bring that word up — like if it would come up in conversation, instead of saying ‘the N word,’ I would just say the word,” Rogan said, proceeding to list Black comedians Richard Pryor and Paul Mooney among the figures he was “quoting” when saying the word.

The 54-year-old commented that the word is unique in that “only one group of people is allowed to use it, and they can use in so many different ways,” but he is now “well aware” that “it is not my word to use.”

“I do hope that if anything, that this can be a teachable moment, because I never thought it would ever be taken out of context and put in a video like that. And now that it is, holy s*** it looks bad,” he continued. 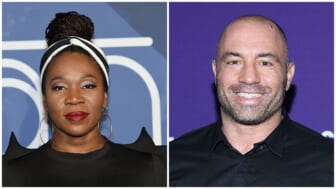 Twitter account @patriottakes uploaded the video on Jan. 30 alongside a thread of Rogan clips in which he compared a Black neighborhood to “Planet of the Apes,” said Black people have “a different brain” than white people and more.

Rogan on Saturday did not address his comment appearing to suggest a cognitive discrepancy between Black and white people, however, regarding his choice to compare being in a majority-Black area of Philadelphia to being “in Africa” and the movie “Planet of the Apes,” Rogan explained that he was “trying to make the story entertaining.”

“I was just saying, there’s a lot of Black people there,” Rogan said, adding: “it wasn’t a racist story, but it sounded terrible.”

Rogan reiterated that the resurfaced clip was “taken out of context,” adding that “it looks terrible, even in context” and that while he thought he was being entertaining, “I certainly wasn’t trying to be racist, and I certainly would never want to offend someone for entertainment.”

Twitter account @patriottakes on Saturday responded to Rogan’s apology, commenting that it “rings hollow” following the exposure of his past conduct in the Twitter thread, which did not include videos of his “disinformation” surrounding COVID-19.

Spotify, which platforms Rogan, is facing backlash for not removing his podcast from the service amid recent backlash to his stance on the COVID-19 vaccines. As reported by theGrio, he has been accused of repeatedly making false claims about the vaccine, prompting several singers to respond by pulling their music from the platform, including India Arie, Neil Young and Joni Mitchell.

“Enough is enough,” @patriottakes wrote on Saturday, calling on Spotify to “immediately terminate” Rogan and pledging to “continue our mission of publishing videos and exposing this and other conduct. This is only the tip of the iceberg.” 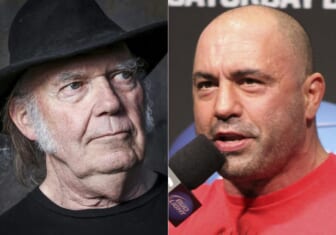 A Twitter user responding to a repost of Rogan’s apology wrote: “This is more than just saying the word. He has a pattern of violent racist anti-black rhetoric.”

Another Twitter user commented that the words “rolled off his tongue easily and comfortably.”

“How is the N Word taken out of context when you compared a black neighborhood with planet of the apes? I ain’t with cancel culture at all, but the cap gotta stop,” wrote celebrity jeweler Ben Baller.

Have you subscribed to theGrio podcasts “Dear Culture” or “Acting Up?”