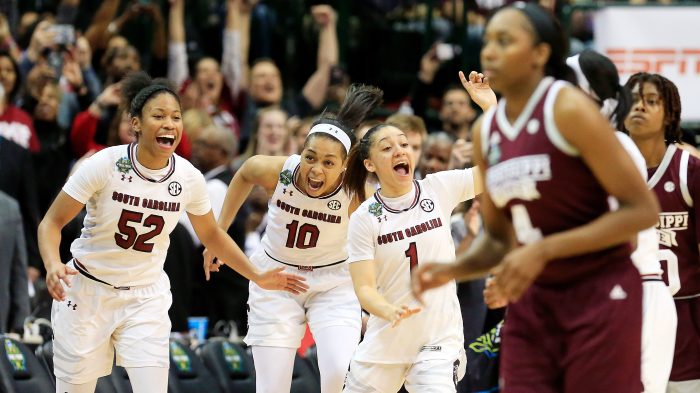 Jackson State senior center Ameshya Williams-Holliday has always known that she belongs in the WNBA. However, five years ago, the WNBA was the last thing on her mind. Then, the current Southwestern Athletic Conference (SWAC) Player of the Year was beginning her sophomore season as a 6-foot-2 forward at Mississippi State, and expected to be a key reserve behind stars Teaira McCowan and Victoria Vivians, now members of the WNBA’s Dallas Wings and Indiana Fever, respectively.

However, something didn’t quite feel right. After coming off a freshman season in which Mississippi State advanced to the 2017 NCAA women’s final before losing to coach Dawn Staley’s South Carolina Gamecocks, Williams-Holliday was burned out. She was sick of the expectations and no longer cared about playing a more prominent role for the Bulldogs or getting back to the NCAA title game. She was done with basketball. No more practices, no more layups, no more rebounds. No more coaches yelling in her ear. She no longer wanted to be a part of it.

“I just left,” Williams-Holliday told Andscape. “I was packing my stuff. [My roommate] was crying, saying, ‘Don’t go! Don’t go!’ while I was just throwing my stuff in the car. I was hurrying up to get out of there. I got millions of texts from my coaches, from teammates, from my mom, everybody. I ignored everybody.”

On Nov. 16, 2017, the same day the Bulldogs were set to play their second game of the season, Williams-Holliday got in her car and left MSU’s campus in Starkville, Mississippi, without telling her coaches. She drove 4½ hours home to Gulfport, Mississippi, officially ending her career at Mississippi State. She had been the first person in her family to attend college. However, the pressures of juggling school, intense basketball practices and training at one of the top women’s hoops programs in the country made Williams-Holliday fall out of love with the thing she used to love the most, basketball.

Williams-Holliday stayed with her family in Gulfport for a while, contemplating her next move before going to live with a relative in Texas, where she worked odd jobs to make ends meet. “I was thinking of something else I could do and make more money to provide for myself and not have to ask nobody for a helping hand. I just really gave up.”

Meanwhile, schools such as LSU, Florida and Georgia began reaching out to gauge her interest in possibly joining their programs, but she didn’t respond. She still didn’t want to play. As the rumors spread around coaching circles that she was done for good, the calls and texts stopped coming, except from one person: Jackson State women’s basketball coach Tomekia Reed.

At the time, Reed was the head coach at Hinds Community College in Raymond, Mississippi. She first began recruiting Williams-Holliday when she was a junior at West Harrison High School in Gulfport, where she was a three-star, all-state recruit. Reed remembered watching Williams-Holliday play and loved how she ran the floor and could score effortlessly around the basket. Reed began texting to check up on her: Could you please respond and let me know you’re OK? Williams-Holliday took a leap of faith and finally replied, and the two stayed in touch.

When Reed accepted the head-coaching position at Jackson State in April 2018, she immediately thought of Williams-Holliday. She reached out to her again about returning to the court, but Williams-Holliday’s response was a picture of a pregnancy test.

“I told her, ‘Look, you can decide to have your child, but you’re still going to have a scholarship to come be a student at Jackson State,’ ” Reed said. “I knew she had a very bright future. I didn’t want her to feel like she messed up or that the chances and the hopes that she thought she had were now down the drain because she’s pregnant. I didn’t want her to think that. So my position was to show her that she can still accomplish whatever she wanted to come up with, as a mom.”

With Reed’s full support, Williams-Holliday enrolled at Jackson State in June 2018. Her son, Jace, was born six months later. She took the 2019 spring semester off to recover from childbirth and adjust to being a new mom and began playing basketball with the Lady Tigers in the summer of 2019. Williams-Holliday’s mother, Florence Williams, was happy to see her daughter finally back in school, finally loving basketball again and on her way to becoming the first in their immediate family to graduate from college.

“Coach Reed did a great job in getting her to come back,” said Williams. “[Ameshya] was going to push to make herself better than what she was. It was great to see her going back. I think that she grew from [the Mississippi State experience] into what she is [now]. It made her stronger.”

Besides being the SWAC Player of the Year, Williams-Holliday is also the back-to-back SWAC Defensive Player of the Year, who averaged 19.2 points, 11.4 rebounds and 2.7 blocks for Jackson State this season. She led the SWAC in four statistical categories: points, rebounds, blocks and field goal percentage (57.8), and recorded 22 double-doubles, tying for sixth nationally. With a 7-foot-1 wingspan, she was a reliable scorer and defender and was instrumental in Jackson State’s 21-game winning streak and SWAC conference championship.

Williams-Holliday also earned a bachelor’s degree in interdisciplinary studies in May 2021 and is now working toward a master’s degree in education. She married James Holliday in June 2021, whom she has credited with motivating her to improve her game this season.

“She has grown tremendously,” said Reed, the SWAC Coach of the Year. “I have seen her grow as a young lady, as a young woman, as a wife and as a mother. She’s helped make me a better person. She’s helped me believe. She’s the one who built this program because she believed enough in me and now others followed her.”

This time around, Williams-Holliday was able to balance school, basketball and motherhood, but it wasn’t always easy. When Jace wasn’t with her at her off-campus apartment in Jackson, he was with his grandmother Florence 40 minutes away in Gulfport. During practice, Reed watched Jace, rocking him in a stroller to make it easier for her. The effort to help her with her son made a lasting impression on Williams-Holliday.

“Coach Reed means a lot to me. I can say she really changed my life,” Williams-Holliday said. “She really pushed me to be the person I am today and she’s everything a person could ask for because I don’t think I would be where I am today without her. She really changed my life for the better. She says to keep pushing it, to keep going and to not give up, and to keep God first and never give up and you make it. I think I made a good decision [to come back].”

Now, that good decision has Williams-Holliday dreaming of the WNBA once again. On Monday, 4½ years after she first started thinking that her basketball life was over, Williams-Holliday will be waiting to see if her name is called in the 2022 WNBA draft. But while her size and numbers would normally suggest that the now-24-year-old, 6-foot-4 forward/center would be an obvious consideration for draft scouts, things are not that simple.

Only five historically Black college and university (HBCU) players have been drafted to the WNBA: Denique Graves (1997), Karen Wilkins (1998) and Andrea Gardner (2002) of Howard, Amba Kongolo of North Carolina Central (2002) and Jaclyn Winfield of Southern (2002). Last season, Langston University’s Asheika Alexander signed a contract with the Minnesota Lynx but was waived during training camp. There are currently no active HBCU players in the league.

“I think if I was at a Power 5 school, it would be a different story of me being drafted or trying to get my foot in [the WNBA],” Williams-Holliday said. “People think [HBCUs] can’t compete with other top institutions [or] a Power 5 school, but that’s not true. I think we deserve to be on the same level. I do think if I was still at Mississippi State, I would be a first-round draft pick. Since I chose to go to an HBCU, I don’t know where I’ll be drafted [or] if I will be drafted.”

Despite the stigma of HBCU schools not facing tough competition, Williams-Holliday’s stats were high when going up against elite talent this season. In the six games Jackson State played against Power 5 opponents Arkansas, Ole Miss, Texas, Mississippi State, Miami and LSU, she averaged 15.3 points and 11.5 rebounds. In Jackson State’s NCAA tournament matchup against LSU, she had a 15-point, 12-rebound performance, with Jackson State nearly achieving a historic upset. Her performance and the Driven Elite Pro Day for WNBA prospects in Duncanville, Texas, on March 28 earned her a spot in ESPN’s latest WNBA mock draft.

“She just came right in and showed what she can do,” said Brian Adams, director of player development for Driven Elite. “She’s very long, athletic, quick on her feet with putbacks and rebounding. She has a real great touch around a basket. I believe she has a great shot of being drafted. Days before the WNBA draft, she’s finally listed on mock drafts, so I believe her chances of being drafted are looking pretty good.”

Added her Lady Tigers teammate, senior guard Dayzsha Rogan, “Ameshya is a great post player. If I get beat, I know she’ll block somebody’s shot. I know she’ll have my back. She’s good when we need to score and we need a play run. She’s good at finishing. Coach tells us to lob it up, she’ll go get it of course, as tall as she is. We could always count on Ameshya to get it done.”

Basketball Hall of Famer and Texas Southern head coach Cynthia Cooper-Dyke faced Jackson State twice this season. In her team’s two losses to the Lady Tigers, Williams-Holliday averaged 23.5 points and 15.0 rebounds. Cooper believes the days of WNBA teams drafting HBCU players are on the horizon. “I think Jackson State has a couple players that could definitely compete, get drafted, go to a training camp and compete for a roster spot. Williams-[Holliday] is one.”

If she does get taken in Monday’s draft, it would be the first time in history for a Jackson State player and only the second SWAC player to be drafted by the WNBA. Reed believes having an HBCU player get drafted will impact Jackson State and the entire HBCU community.

“That’s another door that’s opened for us. She means everything to this program, everything to me and everything to our HBCUs,” Reed said. “Even though [she has played] her last game for Jackson State University, she’s going to continue to open the door for our conference, for our institution, for our HBCU community.”