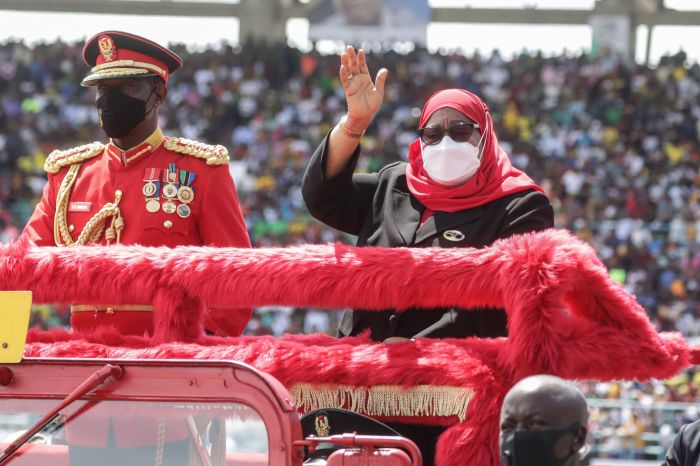 When Francia Marquez was elected the new vice president of Colombia in June, she celebrated while wearing a kente cloth dress and a white blazer, its sleeves rolled up to show her wrists covered in beaded and cowrie shell bracelets. A gold brooch in the shape of Africa was pinned to her lapel and her Afro was pulled back, high off of her face.

Her clothing is meant to evoke the heritage and culture of the dispossessed. The former housekeeper turned environmental activist and lawyer is a member of the country’s Afro Colombian community. She won the 2018 Goldman Prize for her work to stop illegal gold mining on ancestral land.

“I dress the way I do on purpose,” Marquez, 40, told The Washington Post.

On Aug. 7, she will be sworn in as Colombia’s first Black female vice president alongside president-elect Gustavo Petro, joining a select group of Black women around the world whose appearance is a tool in their politics. Women like Marquez, Tanzania’s president Samia Suluhu Hassan and Barbados prime minister Mia Mottley use their style of dress to purposefully communicate with their constituents.

It’s never just clothing when it’s on a Black body. For Black women in politics, their mere existence is contentious and their style of dress takes on a meaning of its own.

Hassan, or Mama Samia, as she is widely known, is Tanzania’s first female president and the only current female head of state in sub-Saharan Africa. (Sahle-Work Zewde has been president of Ethiopia since 2018.) She took office in 2021 after the death of President John Magufuli, who chose her to be his running mate in 2015.

According to Tanzania: The Royal Tour, a documentary in which Hassan guides journalist Peter Greenberg through her country, Magufuli selected her as his running mate to secure the support of both women and the people of the Zanzibar region.

Hassan shows her pride for her native Zanzibar by wearing the colors of the flag (blue, black, and green) in her dress, much like the ubiquitous red, white and blue flag lapel pins in the United States. Hassan, who is Muslim, often wears a red hijab for special occasions, in a nod to Tanzania’s army’s ceremonial uniform. Her daily uniform seems to rely on pairing a brightly colored hijab with a matching blouse, blazers and brooches.

Mia Mottley, the prime minister of Barbados, also favors brightly-colored pieces: loose tunics, flowing linen pants and scarves worn over her shoulder, a nod to both her ancestry and spirit of the Caribbean.

Mottley appeared in the September 2021 issue of British Vogue, wearing Caribbean fashion label The Cloth, a line “grounded in folk, revolution, restoration and integration.” The Cloth’s website says “the act of making clothes tastes of resistance from all our battles,” so it seems fitting that two months later in November 2021, Barbados removed Queen Elizabeth II as its head of state.

Outside the United States, many Black women in politics are able to channel their cultural agency overtly; in the U.S., they are often operating in narrower lanes with more subtle messaging in their clothing.

“I love how Francia Marquez is able to embrace and is choosing to embrace her Afrocentricity in her style and using it to show her presence, but also using it to empower the people she represents,” said Constance White, former editor-in-chief of Essence magazine. “Look at people like [former Liberian president] Ellen Johnson Sirleaf, she wore this huge and amazing head wrap. She felt able and at ease to do that. Can you imagine, like, Kamala Harris or Michelle Obama [doing that]?” 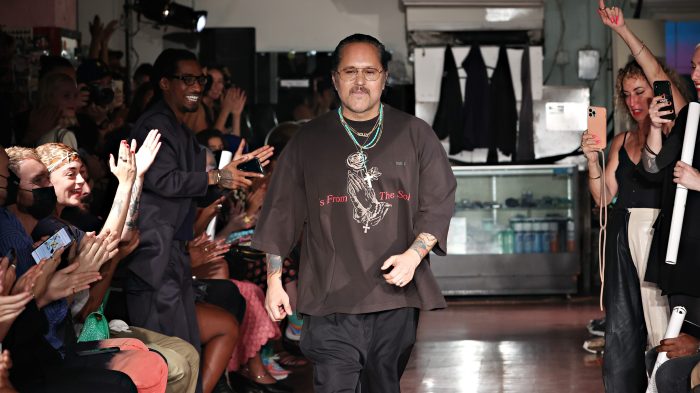 “So many nations around the world have had female presidents, female prime ministers, female political leaders — Africa and Latin America, the Caribbean — it hasn’t been this, ‘Oh, well you’re not supposed to be in this position,’ ” said Angela Tate, the women’s history curator at the National Museum of African American History and Culture. “Whereas here in the United States, it’s a lot more, ‘Hmm. Maybe you’re not fit to lead. Maybe you have too many emotions. What about when they’re on their cycle, they’re not going to be able to lead.’ ”

It’s not shocking, as Tate pointed out, considering Black women were never supposed to stand out. Louisiana’s tignon law in the late 1700s made it illegal for Black women to show their hair in public because their beauty threatened white women. “There’s always, in the context of the United States, this contingent of Black women’s bodies and Black women’s sexuality always being attempted to be taken from them,” Tate said. “That memory of what Michelle Obama went through as the most prominent Black woman of the 2000s, I think that still lingers.”

“Michelle Obama definitely has had an impact on Black women publicly or not publicly associating with style,” said White.

Doja Cat looks like the evolution of rapRead now

White notes that while Harris’ style is very deliberate, she’s had the opportunity to watch Black women such as Shirley Chisholm, the first black woman elected to the U.S. Congress, and Obama, as well as seeing the experience of Hillary Clinton, the first woman to run on a major party ticket in the U.S. “For Black women, we, of course, know it’s no different than in other areas of life where we show up, that there’s an intersection of the issue of our race and the baggage that this country and even other countries carry around that. And then the issue of our gender,” said White.

It’s incredibly rare to see a Black female politician in the U.S. in striking cultural dress, although there is some wiggle room with how Black women wear their hair.

“In the 20th century, the showing of Black solidarity and Black racial pride transformed how people dressed in this decolonization era,” Tate said.

“It’s a very different context in the United States,” Tate continued. “But in other countries, that is part of national pride. That is showing national heritage. And so I think that, if we look to those Black women outside of the United States as the kind of model of, well, how can we reframe the issues around respectability and conformity and authority, as well. Because if someone were to show up how the prime minister of Barbados wears her colorful sashes all the time, OK, when she comes to this country, oh, that’s part of her national dress. Why couldn’t a Black American politician show up wearing kente cloth and not be seen as disrespectful or stepping outside of the bounds of respectability and authority?”

“We see an evolution,” said White. “It’s a slow one, but it’s a sure one. When you think about even as recently as Hillary Clinton needing to, or feeling that she needed to, wear this uniform of a tailored suit, tailored jacket, matching pants, and at the time, it was refreshing. But you compare that now to today, to what [Georgia gubernatorial candidate] Stacey Abrams or what Mia Mottley is wearing, the use of color is a big thing that sets women apart on the political stage from men and these women are not afraid to use it.”

James often wears a brightly colored blouse or camisole under dark suit jackets, but her take on tailoring has a slightly more modern feel while Harris errs on the side of boxy tailoring, said White. 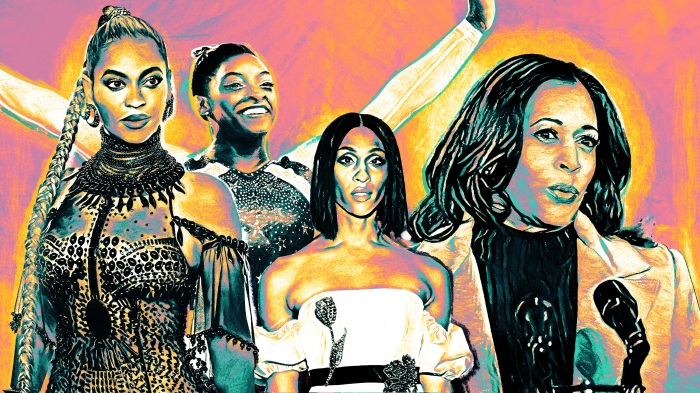 Black women are more visible than ever. Now what?Read now

“Letitia James is wearing body-conscious, very well-fitted suits often with bare legs, and those are long legs because you don’t overlook them, long, beautiful legs, and her jackets,” said White. James is also softer with her detailing: pleating on the sleeve, collarless jacket.

While the difference between the two could simply be equated to a lady lawyer-specific version of East Coast versus West Coast style, it does speak to the way women in politics typically subscribe to a uniform style of dress.

“Those lawyers are very serious about, ‘This is the look.’ You’ve got to sort of mimic the partners, the head DA [district attorney] or [or whoever is in charge],” said White.

White mentioned the switch that flipped in Obama’s own lawyerly sense of style when her husband won the Democratic presidential nomination in 2008, and Colombia’s Marquez has made a similar change.

She’s embraced a young designer, Esteban Sinisterra Paz, and a fashion consultant Diana Rojas, who have gotten Marquez to give up jeans. Instead, Paz has created a capsule wardrobe for her to mix and match.

“Let me just put it like this,” said White. “A whole lot of people are going to start to hear more, become familiar with Francia Elena Marquez, this icon of Columbia, and go, ‘I didn’t know there were Black people in Columbia.’ ”

Channing Hargrove is a senior writer at Andscape covering fashion. That’s easier than admitting how strongly she identifies with the lyrics “Single Black female addicted to retail.”