‘I’m just putting my head down and working’ —

The national motto for the Bahamas is “Forward Upward Onward Together,” which is defined as moving in “the direction and manner in which the Bahamian nation should move.”

Far away from home in Phoenix, it’s that Bahamian mindset that has helped Deandre Ayton have peace with his unrewarded contract situation with the Suns.

“I’m not really worried about things like that and having all the stuff mixed in my head,” Ayton told recently. “I’m just putting my head down and working. Me? I’m from the Islands. We work for what we want. It is well-deserving with how I am playing right now. I’m going to bust my tail and get something I deserve.”

During the 2020-21 campaign, Ayton averaged 14.4 points, 10.5 rebounds and 1.2 blocks a game in his third NBA season, and his 66% field goal percentage in the postseason was the highest in NBA history, according to ESPN Stats & Information.

The 6-foot-11 center was eligible to sign a five-year, $172.5 million extension — with escalators that could push it to $207 million — by the Oct. 18 deadline. The No. 1 pick in the 2018 NBA draft had no intention of agreeing to a deal less than comparable max contracts, sources told ESPN’s Adrian Wojnarowski previously.

Moreover, the Suns signed 11-time NBA All-Star Chris Paul to a four-year, $120 million extension over the summer, while forward Mikal Bridges, also a member of the class of 2018, signed a four-year, $90 million extension. Two-time All-Star guard Devin Booker is in the midst of a five-year, $158 million contract that lasts through the 2023-24 season. But the deadline for Ayton came without the Suns presenting a max offer, thus making him a restricted free agent next offseason.

“It didn’t work out and I got it out of my mind right away,” Ayton, 23, said. “What I can do to make it rub in everyone’s faces is to bust my ass, work hard and win games. At the end of the day, it’s all about winning. If you want to get something and earn something in this league, you have to be a winner. Do something that leads to winning. Me putting my head down and working is just closing out all of that noise. I’m not really worried about all of that. 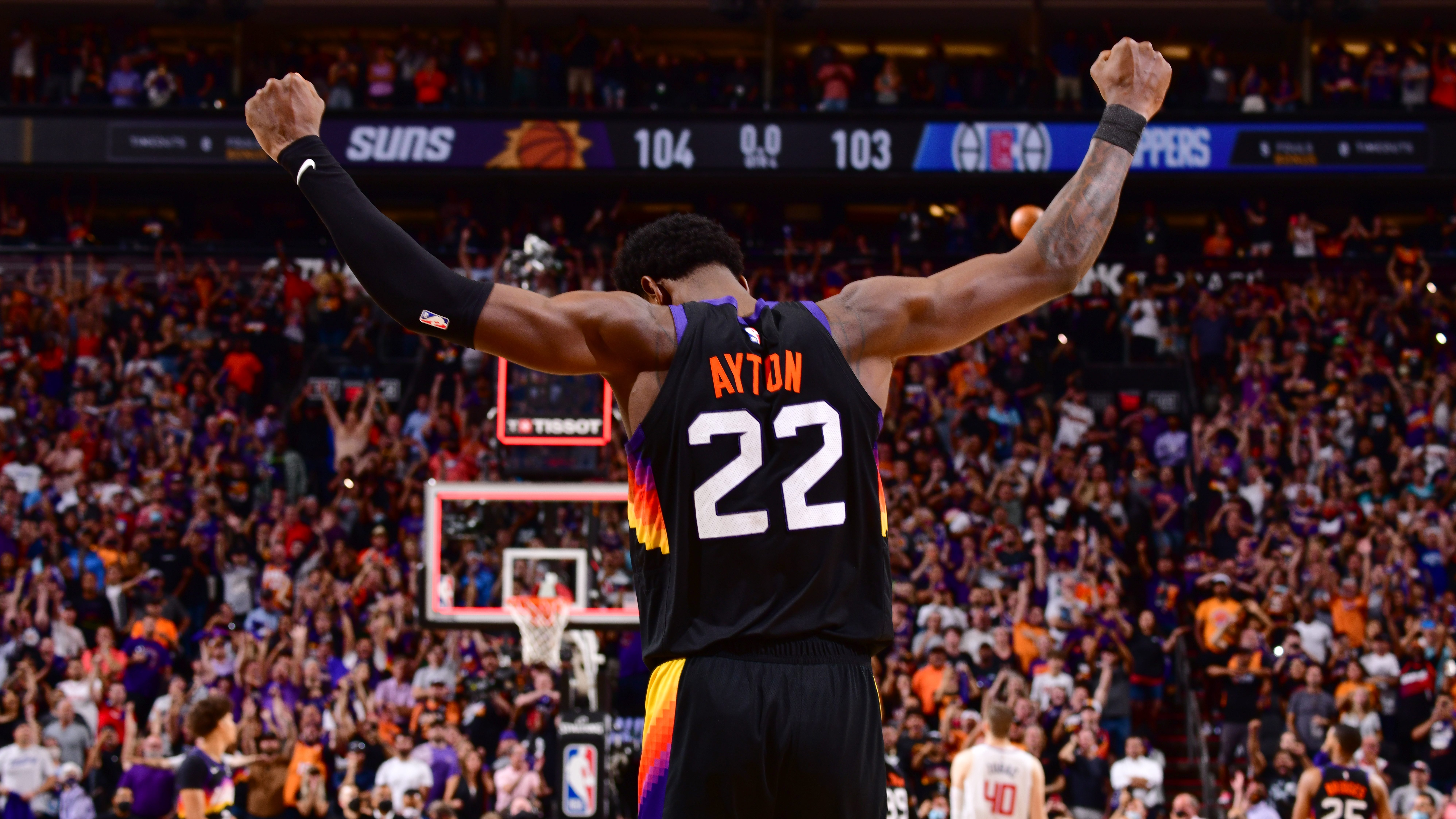 Deandre Ayton: ‘I’m trying to bring that ‘Larry’ back to the Bahamas’Read now

Ayton, who is averaging 16.3 points and 11.1 rebounds per game this season, plays like a throwback center, from his game to his sideburns to his competitive spirit. The 2019 NBA All-Rookie first-team selection can score in the post, knock down the midrange jumper and block shots. The spotlight of the class of 2018, however, has often shined on two hot-scoring popular guards in Doncic and Young, who have both been NBA All-Stars while Ayton has not.

Even so, Ayton said he has not succumbed to the pressure of being the No. 1 pick and appreciates what Doncic and Young have brought to the NBA. His high confidence with the game to boot has helped that mindset.

“I always give them their flowers,” Ayton said. “I always know how hard guys are working on their games. You never know what guys are doing to be great, so you have to give respect where respect is due. Me? I worry about myself. And the type of dude I am, I want to be the best young two-way player in the league where I’m controlling the game even if I ain’t scoring the ball.

“When I’m on the court, I’m impacting the game with just me on the floor. Being everywhere. Creating shots. Rolling. Blocking shots. Just being in the paint, loud, communicating. That’s my type of basketball. All the dribbling through legs? I ain’t got that. I got ‘Book’ and ‘CP’ to do that. Taking care of the game and playing real basketball, that’s me.”

Booker, Ayton and the Suns went 8-0 in the NBA bubble during the 2019-20 season, but it wasn’t enough to make it to the playoffs. With Paul joining forces with Ayton and Booker the next season, the Suns easily ended an 11-year postseason drought. Phoenix coach Monty Williams said that Booker, Paul and teammate Jae Crowder pushed Ayton to “be great” last season.

Ayton was great in the postseason, and he earned one of the most memorable moments in franchise history: the “Valley Oop.” The game-winning alley-oop at the buzzer gave the Suns a stunning 104-103 win in Game 2 of the 2021 Western Conference finals against the LA Clippers. The Suns’ star trio also led the franchise to its first NBA Finals appearance since 1993 to set up a meeting with the Milwaukee Bucks.

Ayton averaged 14.7 points, 12.0 rebounds, 1.5 blocks and 1.5 steals against the Bucks in the Finals. Ayton held Bucks star Giannis Antetokounmpo to 53% shooting as the primary defender in the Finals, while Antetokounmpo shot 70% against the rest of the Suns. Ayton also shot at least 50% in 17 straight playoff games, trailing only Shaquille O’Neal (2006) for the longest postseason streak in league history.

“We always talk about how slow bigs are able to produce. How many guys his age have been able to do that?” Williams said.

The Bucks ended up winning the NBA title in six games over Phoenix. But by the time the Finals concluded, Ayton was able to establish himself as one of the league’s elite centers. He also had a positive attitude after his Game 6 media availability, telling reporters, “Even though we lost, we still had fun.”

“When I lose, it’s never a loss,” Ayton said. “I’m always learning because I know I played my ass off. I did what I can. I did what the team told me to do. Reflecting, there is so much area to grow. If I can do that and this, who is going to stop me? All I’ve been working on is getting more to the [free throw] line and being more of a threat. I already established myself as a big man in this league doing what a big man has to do. Protect the paint. …

“I’m happy we went to the Finals, the whole world is watching us and I’m not disappointed. I’m entertained by this thing. I want to do more. I’m going to do more. It’s hard to win in this league.”

Williams noticed the positive effect success and winning had on Ayton, as he arrived to training camp in “great shape.”

“Until you’ve been in the playoffs, you always have doubts on whether you can do it on that stage,” Williams said. “And him playing the way that he did allowed him to understand, ‘Yes, you can and you also can do better.’ When you play that well in the playoffs, you build confidence and it also makes you want to work harder. And that is what he did in the offseason.”

The Suns were the defending Western Conference champs, but as the new season began, teams such as the Bucks, Los Angeles Lakers, Brooklyn Nets and Golden State Warriors got more of the spotlight. There was also a cloud over the team after ESPN’s Baxter Holmes reported allegations of racism and misogyny within the organization by owner Robert Sarver during his 17-year tenure.

Since then, the Suns have gone from 3-3 to 20-4, including a franchise-record 18-game winning streak.

Ayton and the Suns are not overlooked anymore and he believes the team can move forward, upward and onward together to an NBA championship this season.

If the Suns continue to win, the franchise also hopes to have three All-Star selections for the first time since 2007 in Paul, Booker and Ayton. Booker and Paul made it last year, and appear likely to return. It is expected to be challenging for a center to make it in the West with Nikola Jokic and Rudy Gobert fighting for spots again.

But if the Suns continue to have one of the NBA’s top records and Ayton continues to play focused basketball, he hopes to be the third Suns All-Star and earn a major award as well.

“I want All-Star and defensive player of the year,” Ayton said. “I really want that. I want to be on that talk of first-team defense.”

Minnie Miñoso was worthy of Cooperstown. So what took so long? —