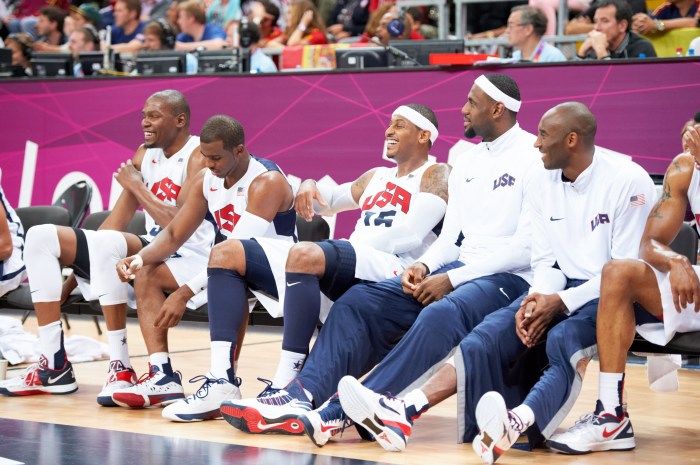 LOS ANGELES — When Carmelo Anthony enters his 19th NBA season, there will be no other active player who has suited up in more regular-season games without a title. Only Basketball Hall of Famer Karl Malone has scored more points in NBA history without winning a title, according to ESPN Stats & Information.

But perhaps in playing with LeBron James with the Los Angeles Lakers, the 37-year-old now has his best opportunity to finally win a championship with his sixth NBA team.

“I have been thinking about winning a title for 20 years. The same thought process. Now, with the team that we have and the situation that we have, we really can look forward to competing at that level. That is exciting for me,” Anthony told recently during a shoot for a to-be-announced NBA Film called NBA Lane which celebrates the 75-year history of the league.

For those who have followed Anthony’s NBA career since the beginning, it may seem odd seeing him play with James.

Anthony was the third overall pick in the 2003 NBA draft, just two spots behind James. The two entered the NBA as friendly rivals and fought a close race for 2004 NBA Rookie of the Year, with James winning by a hair. James has gone on to become arguably the greatest NBA player of all time as the league’s third all-time leading scorer and four NBA titles. Anthony is a 10-time All-Star who ranks 10th all time in scoring, second to James among active players.

Anthony and James have been Olympic gold medal-winning teammates together with USA Basketball. Yet, Anthony told he never thought he and James would ever be NBA teammates. That all changed when James sold his longtime friend on signing with the Lakers during an unexpected offseason phone call.

“We always used to talk about it in a joking way: ‘What if we get together? It would be crazy.’ But for where we are at now with both of our careers, both of our paths, I think it was meant for it to happen at this point,” Anthony said.

Anthony is expected to have a catch-and-shoot and post-up offensive presence for the Lakers off the bench after averaging 13.4 points and shooting 40.9% from 3-point range for the Portland Trail Blazers last season. His NBA career has taken him to Denver, New York, Oklahoma City, Houston and Portland. Anthony believes the big-city pressure he’s previously felt playing for the New York Knicks has prepared him to be a Laker in Los Angeles.

With current NBA superstars James, Anthony Davis and new addition Russell Westbrook on the roster, suiting up for a franchise with 17 championships and mounting pressure to win another could be the most rewarding opportunity of Anthony’s career. Moreover, the 6-foot-7 forward has extra pride playing in Staples Center, where his beloved late friend Kobe Bryant used to star and where his No. 8 and 24 jerseys hang in the rafters. 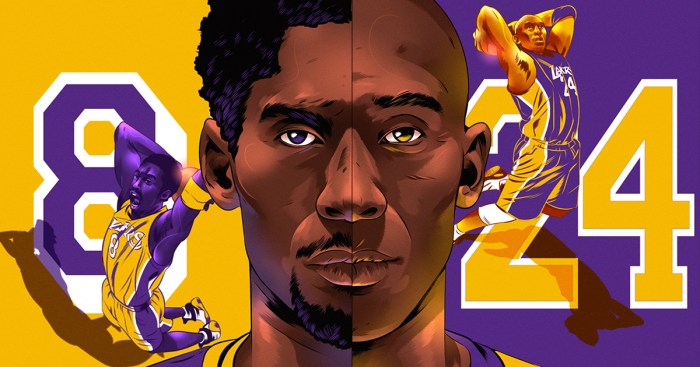 “It’s different in a great way,” Anthony said of playing in LA. “I was fortunate enough to play in New York, an organization in a big city, in a big market. But those colors are totally different. Blue and orange are different than purple and gold. Being in LA, you really feel that. I know my brother Kobe is smiling right now.”

Another Laker legend who has a special connection with Anthony is Kareem Abdul-Jabbar.

The NBA announced on June 29 that Anthony won the inaugural Kareem Abdul-Jabbar Social Justice Champion award, which “recognizes a current NBA player for pursuing social justice and advancing Abdul-Jabbar’s life mission to engage, empower and drive equality for individuals and groups who have been historically marginalized or systematically disadvantaged.”

Anthony started the Carmelo Anthony Foundation in 2005 in hopes of sparking actionable change and social reform.

Anthony, James, Chris Paul and Dwyane Wade voiced a call for action during the 2016 ESPYS. Anthony was also guest editor for a special social justice issue of SLAM magazine in 2020 with his son Kiyan. The cover’s headline read: It Stops Now. Earlier this year, Anthony debuted Creative 7, a multiplatform content company that is developing projects on adversity, social activism and storytelling. 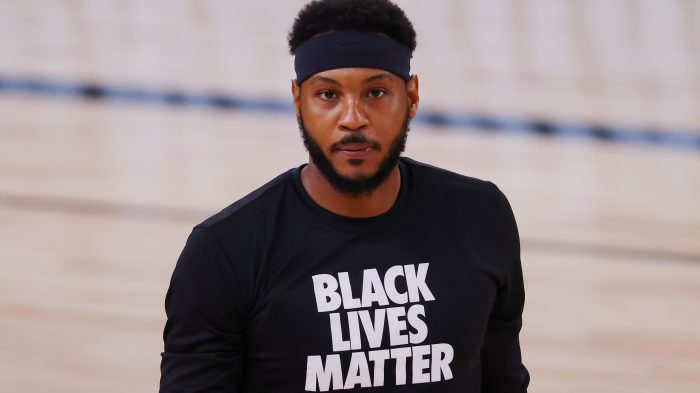 The former Trail Blazer received a $100,000 donation for winning the award, which he gave to the Portland Art Museum’s Black Arts and Experiences Initiative. Later this season, the trophy will be unveiled and it’s expected that Abdul-Jabbar will present it to Anthony.

“He’s the face of social justice,” Anthony said of Abdul-Jabbar. “For me, I’m happy he is starting to talk, speak out and tell his story. People are seeing him for who he really is and are giving him his flowers. So when he called for me about that award, and to be the first one …

“I know how long it took for him to get to that point where he was ready to step back out there publicly and kind of just own that lane. I’m doing it because of the foundation he laid down. So for me to talk to him, build with him and get to communicate with him about what his mindset was, it doesn’t get much better than that.”

Anthony appeared to be a natural when he recently performed for the NBA’s 75-year anniversary commercial in the Leimert Park neighborhood in South Central Los Angeles that comes out later this season. So now that “Melo” is near Hollywood, should we expect the Laker to take on more acting roles?

“I’m not acting,” Anthony said. “I’m behind the camera. Always been.”