As college students head back to their classrooms, the enrolled — as well as alums — at three historically Black colleges and universities (HBCUs) can add some extra hop, skip and jump to their steps due to the unprecedented successes of their schools’ athletic programs.

That’s because — despite students being away from campuses and games either not played or played without audiences — North Carolina A&T, Norfolk State and Texas Southern combined to rack up nearly three-fourths of $1 billion in exposure, according to number crunchers and athletic officials at the three HBCUs and one of the conference offices.

The bulk of that is an estimate as high as $600 million in exposure for N.C. A&T, where the school’s track and field program was in the national spotlight for nearly a month after winning double-digit NCAA men’s and women’s track and field national championships and sending nearly a dozen athletes to the Olympic trials, four of whom went on to compete in the Olympics. Two of them, sprinters Trevor Stewart and Randolph Ross Jr., brought home three medals – two golds and a bronze. They were the first Olympic medals won by N.C. A&T athletes. 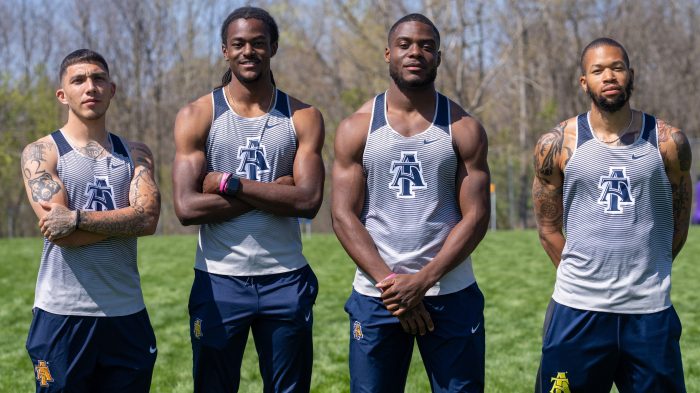 “Our track teams, men’s and women’s … you saw them on TV competing in the NCAA championships,” Martin said. “I don’t know about you, but I still look at those videos, and I still act like I don’t know the outcome. And then we saw them competing at the Olympic trials … and then we saw two of our student-athletes compete for the U.S. Olympics team and one for Liberia and one for Mexico.”

N.C. A&T economics professor Cephas B. Naanwaab estimated the value of the Aggies’ track exposure to be “in the low- to mid-hundreds … $200 million to $600 million.”

“There is a difficulty with putting a dollar value on this type of exposure,” Naanwaab said. “The challenge stems from not having the relevant data. We will need to know several data points: how many media ads featured A&T athletes, what is the viewership/readership of those media, what is the potential increase in enrollments resulting from this exposure, as well as increased philanthropic and alumni giving to the university.

“We know for sure that this exposure will further accelerate the strong enrollment growth N.C. A&T has seen over the past several years. Philanthropic donations, as we have seen over the past year, is also expected to increase following the success of A&T athletes at the Olympics and the attention that brought to the university nationally.”

Meanwhile, the success at Texas Southern and Norfolk State came during March Madness last spring — the zenith of college sports — when both teams won First Four games in the men’s NCAA basketball tournament. Those victories marked the first time that teams from the Southwestern Athletic Conference (SWAC) and the Mid-Eastern Athletic Conference (MEAC) won games in the same tournament.

At Texas Southern, J. Kenyatta Cavil, a professor of sports management, sports studies and sports entertainment, took a couple of weeks to crunch the numbers at the request of ThePowerBloc.

His assessment: “My analysis estimated Texas Southern University received between $90 million to $100 million in value for participating and winning an opening-round game in the 2021 NCAA tournament. Part of this analysis is based on the average cost of a 30-second TV commercial during the NCAA men’s Division I basketball tournament, among other factors.”

Cavil, co-editor of The Athletic Experience at Historically Black Colleges and Universities: Past, Present, and Persistence, also assessed the value of such exposure.

“The sporting HBCU diaspora associated with the HBCU sports culture is at a heightened pitch during the NCAA tournament prior to tipoff,” Cavil continued. “The fact that the Texas Southern Tigers won a game in the tournament empowers the Tiger fan base as well as SWAC and HBCU fans in general to express their fandom.”

Cavil said HBCUs also benefit from the “Flutie effect” (named for former Boston College quarterback Doug Flutie), where “having a successful college sports team increases the exposure and prominence of a university.”

“This will often lead to increased applications for admission to the university and therefore increased enrollment,” Cavil added.

Indeed, enrollments are trending upward at the three institutions. N.C. A&T’s Martin told that gathering of faculty and staff that the nation’s largest HBCU had broken the 13,000-student barrier for the first time.

Melody Webb, athletic director at Norfolk State, said the Spartans’ success in the NCAA tournament “has been positive for NSU and helped to increase our national profile both in tangible and intangible ways.”

Webb added: “After our win against Appalachian State, for 48 hours all eyes were on Norfolk State University. ESPN. Fox Sports. CBS and others.

“To have a team make the tournament and to perform successfully is a big deal. As athletics director, I believe this type of exposure helped to increase our visibility, future recruiting efforts and had millions of people look up NSU on their web browsers.”

Webb said this led to increased bookstore sales for NSU memorabilia, financial support to the athletics program, and potentially helped with enrollment. 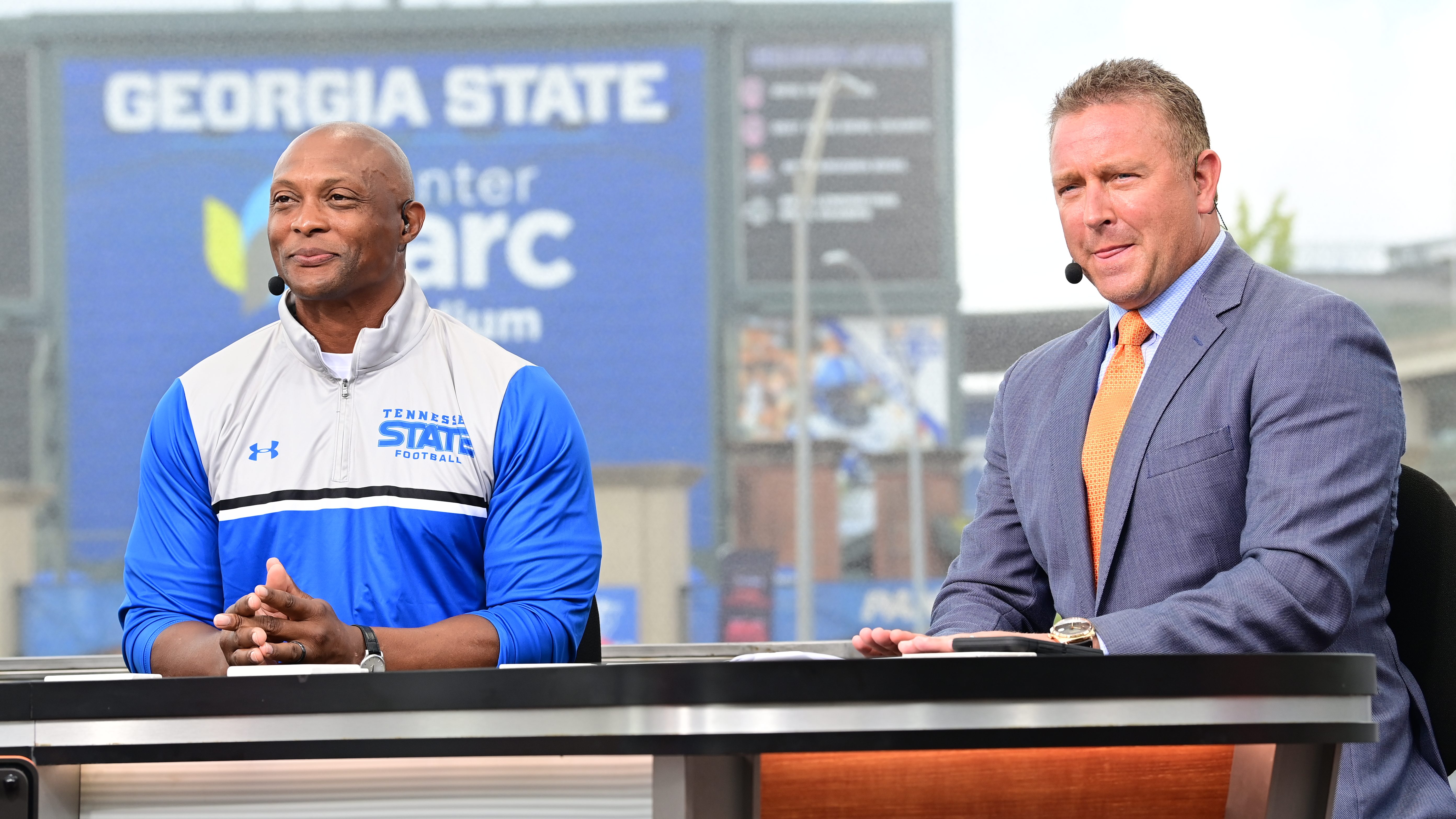 Webb also noted that during the team’s tournament run, Norfolk State “was mentioned in more than 8,000 news stories, and we had a calculated publicity value of $36.1 million. In addition, our calculated advertisement value, measuring NSU coverage by print and digital advertising rates in addition to audience reach, was at $11.9 million.”

The SWAC did not release its NCAA tournament information despite repeated requests from ThePowerBloc, but Texas Southern’s success should have brought to its league numbers similar to those provided by the MEAC.

Cavil, of Texas Southern, and Carray Banks, Norfolk State’s faculty athletics representative, said the numbers tallied by NSU don’t give the full weight of the Spartans’ exposure. They agreed that because Norfolk State’s next game was against the tournament’s top-seeded Gonzaga, the exposure for the Spartans increased exponentially. (TSU’s next game was against the No. 1 regional seed, Michigan.)

“For every one person watching and talking about Texas Southern, there were five watching ours,” Banks said. “Whatever number Texas Southern comes up with, I would say ours would be larger, because we played Gonzaga.

“After winning that game [against Appalachian State], there was a lot of jubilation, because we knew that all eyes would be on us to either shock the world or be a thorn in Gonzaga’s side.”

But the school that really racked up in the publicity and exposure department was N.C. A&T.

Todd Simmons, N.C. A&T associate vice chancellor for university relations, points out that, “The football and men’s and women’s basketball teams join with both track teams in bringing incredible value to A&T year in and year out.

“At their best, intercollegiate athletics offer a great ‘front door’ to a university,” Simmons added. “They are often the first way that external constituents become familiar with us, and managed properly, as AD Earl Hilton unfailingly does, they can be a great and positive reflection on the university.

The Aggies received more time in the sports spotlight recently with the fall enrollment of retired NBA player JR Smith, who has been cleared to play on the school’s golf team.

The athletics success of N.C. A&T, Texas Southern and Norfolk State is part of a larger trend of HBCUs receiving national attention during the pandemic.

As recently as Aug. 28, the Cricket MEAC/SWAC Challenge in Atlanta gave North Carolina Central and Alcorn State a national platform on ESPN, including the network’s signature College GameDay show and First Take Live, and on ABC’s Good Morning America.

NBA All-Star Weekend 2021 provided more than $3 million in initial support to HBCUs through the Thurgood Marshall College Fund, United Negro College Fund (UNCF), National Association for Equal Opportunity in Higher Education and Direct Relief’s Fund for Health Equity. HBCUs received widespread exposure and mentions during All-Star week, following up mentions and exposure in spring 2020 for several schools during the abbreviated NBA season in the bubble at the ESPN Wide World of Sports in Orlando, Florida.

Donations flooded into HBCUs beginning in the fall of 2019.

Morehouse College in Atlanta in the last two years has been the beneficiary of more than $100 million in donations. Howard University in Washington is nearing $100 million in donations, including a $40 million transformational gift from philanthropist MacKenzie Scott, a $32.8 million gift from former New York City mayor Mike Bloomberg, $10 million from the Karsh Family Foundation, and a $1.59 million donation from Bloomberg Philanthropies.

Soon afterward, Scott gave $560 million to 23 HBCUs across the country, with her donation levels ranging from $4 million to $50 million. For each university, her donation ranks as the largest gift received. Scott donated to the UNCF and the Thurgood Marshall College Fund as well.

Sanders and George guided their teams against one another on Sept. 11 in the annual Southern Heritage Classic at the Liberty Bowl in Memphis, Tennessee. Jackson State won 38-16.

Meanwhile, in February 2020, ESPN began broadcasting Why Not Us, an eight-part docuseries that focused on the basketball program at N.C. Central and its legendary coach LeVelle Moton. The show’s executive producers were NBA star Chris Paul and ESPN commentator Stephen A. Smith, an alum of Winston-Salem State.

Cavil, of Texas Southern, noted the significance of HBCUs receiving recognition beyond their playing fields and arenas — particularly being highlighted as Black achievement in the current era of Black Lives Matter, George Floyd/Reform the Police and Rock the Vote.

“While the sporting life at HBCUs is an integral part of these institutions’ missions,” Cavil said, “the exposure to a broader audience is especially important in this current landscape.”