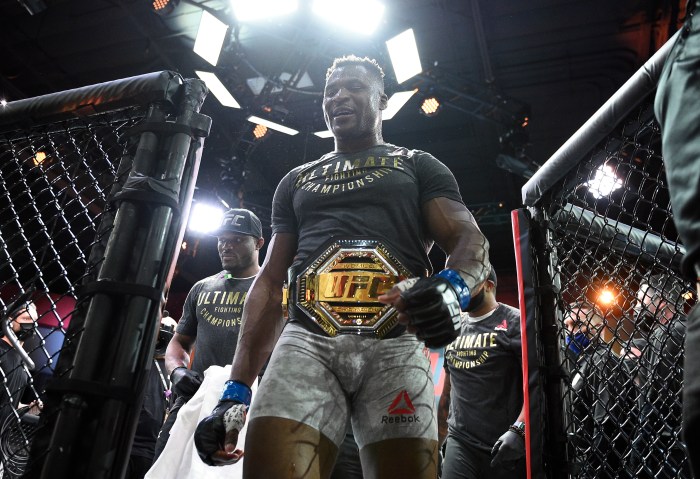 A decade ago, Francis Ngannou left his hometown of Batié, Cameroon, to pursue a career in boxing. It took him more than a year (“14 months in hell,” to be exact) to get to Paris, and he was homeless for months, spending nights in a parking lot. Ngannou spent his days in the gym, where an introduction to MMA shifted the course of his dream to become a professional fighter.

In March 2021, the 6-foot-4, 263-pound Ngannou defeated Stipe Miocic with a second-round knockout to become the UFC heavyweight champion. That day also marked the announcement of Ngannou’s endorsement deal with Gymshark, a fitness apparel company in the U.K. that has largely been represented by bodybuilders. Ngannou, 35, is one of just two non-bodybuilding professional athletes, along with former interim WBC lightweight champion Ryan Garcia, to have an ongoing partnership with the brand.

Ngannou, who’s nicknamed “The Predator,” has a career MMA record of 16-3 (12 wins by TKO and four by submission). At UFC 270 in Anaheim, California, on Saturday, he will have his first title defense against Ciryl Gane. Leading up to the fight (which has yielded a storyline of contractual controversy), Ngannou appeared in his first brand campaign for Gymshark. Dubbed United We Sweat, the campaign is inspired by the hardships Ngannou faced before achieving UFC glory, from working at the sand mines in Cameroon at the age of 10 to being imprisoned for illegally crossing into Europe.

“Francis’ story is so incredibly inspiring. His strength, perseverance and commitment to community make him a perfect partner for our brand,” said Sennai Atsbeha, vice president of brand marketing for Gymshark. As part of their partnership, the company will assist the efforts of the Francis Ngannou Foundation to provide Cameroonians with access to training facilities in Ngannou’s native country.

caught up with Ngannou ahead of the rollout of the Gymshark campaign and one of his final training sessions before UFC 270.

This conversation has been edited for clarity and length.

Take us back to March 27, 2021, when you defeated Miocic to become the UFC heavyweight champion. What do you remember most from the day?

I remember everything. I finally completed what had been my dream — the goal I had been chasing for a very long time. And that was the day that my Gymshark partnership became official. We signed the deal right before the fight. Then after that, I took some time off to introduce the [championship] belt to my family, to my people, which was a very emotional and unprecedented moment.

What did it mean to you to take the belt home to Cameroon?

I don’t know if I have the words to explain how I felt. It was incredible. It wasn’t until then really that I realized what I had done. That I had become a world champion. It was something very unique. Something that had never happened in my country before. And all those people that were celebrating were people that could relate to me and my story. I could also relate when I looked at them. 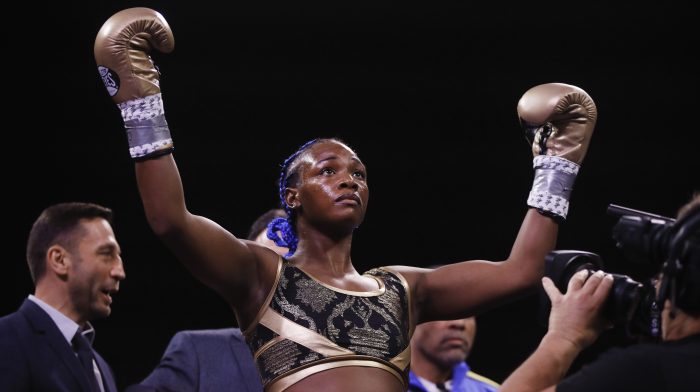 You’ve just appeared in your first official brand campaign with Gymshark. What goal did you have for the campaign?

My goal was to build a long-term partnership and eventually my own collection. And it’s been great the past year. Most importantly, the brand shares the same values as me. Gymshark cares about the work I’m doing with my foundation, which matters a lot to me.

You’re now a world champion with over a dozen endorsements. Did you ever imagine reaching this point?

You know, I might sound a little crazy sometimes. A little arrogant or cocky. But I always believed that I was gonna make it. Maybe that’s the reason why I’m here: I always believed. Even though I was aware the circumstances weren’t the best. My situation wasn’t the best. Odds weren’t in my favor. But in the bottom of the heart, I had faith something would happen. I just had to keep going.

You’ve spoken before about your journey from Cameroon to Paris. You said the day you decided to go, you packed a bag and left. What exactly did you take with you?

I left Cameroon in early 2012. I got to France in the second half of 2013. I made the decision to leave Cameroon a very long time before I actually did it. I knew that to do what I wanted to do I had to find somewhere with more opportunities. It was definitely not in Cameroon.

I just took a backpack. In it, I had some clothes and shoes. I had a little money in my pocket. And that was it. Along the way, you have to figure out what to do. You have to go through different countries and different border securities. It took me 14 months. It wasn’t easy.

How exactly were you introduced to mixed martial arts?

I was introduced to MMA by a friend — the same guy that I first met in France. His name is Didier Carmont. He was leading the boxing class that day. I explained my situation to him. He pleaded to the main coach on my behalf. He called me and told me that I was granted access to the gym. After a few sessions of training, he started to talk to me about mixed martial arts. I didn’t know anything about it. He kept mentioning, ‘Believe me. You have the potential. You are built for this sport. It’s gonna lead to your greatest outcome.’ I didn’t want anything to do with MMA.

At that time, were training gear and gloves hard to come by?

Didier gave me my first everything. When I got access to the gym, I didn’t have nothing. When we first met, he gave me about 50 euros. I went to a fitness shop to buy some clothes. Then he gave me boxing clothes. He’s a big guy as well, so he gave me some of his clothes: jeans, shirts and sweatshirts. A couple weeks after, because people were making fun of me about my phone, he gave me a brand new smartphone. He brought me to the store, asked me to choose some sneakers. I was homeless. I was sleeping in a parking lot during that time. But he was trying to keep me around other people after training to socialize. He’d say, ‘Let’s grab a drink,’ and would always have my back. He’d always tell me, ‘Don’t worry, I’ll get you.’ Two months into training, he gave me my first apartment that he owned in a very fancy area in Paris. I stayed there for about two months. By the time I left that apartment, he helped me find another place in Paris. So, yeah, it was him. 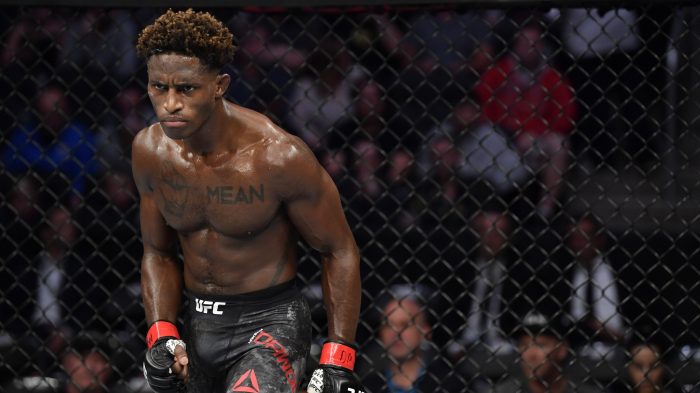 ‘Us Black fighters need to get together and help our damn selves’: The fuel that drives Hakeem DawoduRead now

Are you still close?

Yes. But I mean, he doesn’t like to be in public. He doesn’t even have social media. He won’t answer the phone. But then he’ll show up like he was there the whole time. When I go to Paris we try to see each other. Even when I just have a layover, he’ll come to the airport, and even if it’s for 30 minutes, we meet up.

What do you remember most from your first MMA fight?

My first-ever MMA fight was so strange. I went into Crossfight, which is now MMA Factory, and Fernand Lopez was the coach there. I was training there and Fernand told me, ‘We have this MMA tournament.’ I didn’t want anything to do with MMA at first. But I was like, ‘Since I’m here, let me try it.’ I took a fight four months after I started MMA. I was fighting a guy and I was so strong that when he went down, I just grabbed his hand and twisted it. I didn’t even know what I was doing.

Fast-forward to now, you finally get to defend your heavyweight title against Ciryl Gane. Is this the biggest fight of your career?

Every fight is the biggest fight in your career. That’s how you approach fights better. There are no small fights. Because every fight in the long term makes you who you are. That very first fight that I fought eight years ago without knowing anything about MMA, to this day that contributed to defining my career. And the fight this weekend will contribute. Every fight is the most important fight of my career. At this point, I trust myself. I trust my skills. I really believe that I’m the world champion for a reason. I’m ready to prove it.

What will it take to remain the world champion?

A victory. [Laughs] All it will take is a victory. 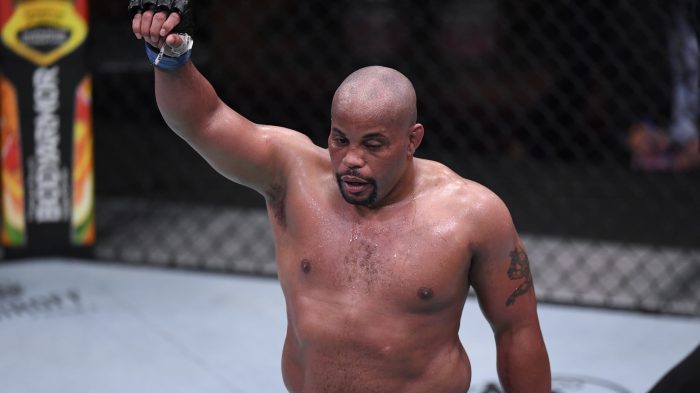 What do you hope the future holds from a fighting standpoint? Is there anything else you’d like to accomplish?

Boxing, definitely. That has always been my goal. Boxing was my first dream. I can’t say now, because I don’t know exactly what the rest of this year is going to look like. But maybe by next year, I can really consider boxing.

Outside of the octagon, what has it meant to you to receive support from Gymshark for your foundation’s efforts in Cameroon?

I’ve had a gym for my community in my village of Cameroon for over three years now. My goal is expanding. I have another gym in a different city [Buea, Cameroon] that I’m opening for other kids. That’s where Gymshark is coming in to help, as well as with my current gym, by outfitting kids there who can’t afford it.

Do you see yourself in the kids that come to your gym?

I see myself in all of them, because they are all exactly what I was. Dreamers with nothing but dreams. That’s why I built my first gym. Because I can relate to their stories. There’s nothing that they are going through that I don’t know.

Aaron Dodson is a sports and culture writer at . He primarily writes on sneakers/apparel and hosts the platform’s “Sneaker Box” video series. During Michael Jordan’s two seasons playing for the Washington Wizards in the early 2000s, the “Flint” Air Jordan 9s sparked his passion for kicks.