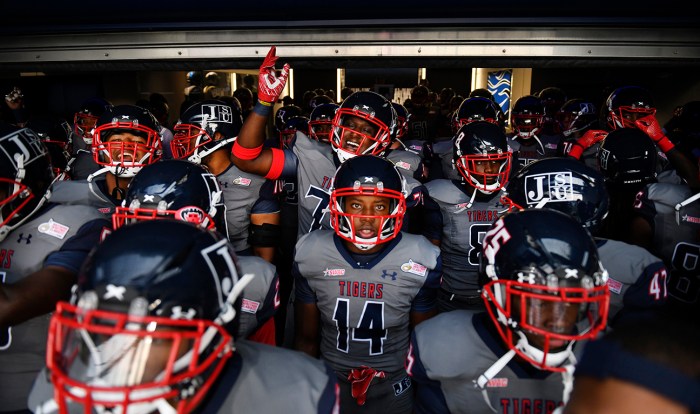 JACKSON, Miss. — A couple of hours before Jackson State coach Deion Sanders leads his team on the field against Alabama A&M, he’ll place his pregame outfit on the floor in front of him and study it.

He’ll scrutinize the shirt, the shorts, the shoes, the socks and the baseball cap he’ll wear, making sure the outfit is flawless.

Only then will he start to get dressed.

It’s a tradition Sanders began in elementary school, where he used to lay out his clothes on the first day of school, continued in the NFL and maintains today.

Sanders started laying out his uniform in the NFL in part because there’s so much downtime between when the players arrive and when the game starts.

“You’re so proud of that uniform because you made it, man. Then it got to be a thing where I laid it out and I balled out,” he said with a chuckle. “I wasn’t saved then, so it was a superstition.

“But nobody could cross it. You couldn’t step over it, step through or step on it or you might go out there and have a bad game.”

You see, Sanders has been serious about looking good, feeling good and playing good since he was a kid growing up in North Fort Myers, Florida.

“When you play youth football, you got dressed at the crib, so you laid it out, partially to see how it would look,” he said. “Secondly, to make sure you had everything, especially your accessories.”

Wearing a uniform has always been important to Sanders, and now he’s sharing that love with his players at Jackson State.

More on Sanders and Jackson State

Jackson State, which is wearing all white, including white helmets on Saturday, has six different uniforms and five different helmets.

The Tigers just received a black uniform this week that had at least one player offering a small bribe to equipment manager Cedric Buckley for a glimpse of the jersey.

Just so you know, he didn’t accept it.

Under Armour is working on three more uniform concepts for next season.

“Coach Prime helps us feel good about ourselves,” senior Warren Newman said. “We’re able to do what the big schools are able to do. Before he got here, we had two uniforms. Everybody knew what we were wearing.”

Jackson State probably won’t wear the same uniform combination twice this season. It’s also one of the few Southwestern Athletic Conference teams that has players’ names on the back of its jerseys.

“It’s a big plus to have our last names on our jerseys. People should know us, not just our numbers,” said linebacker Keonte Hampton. “When I first got here, people just called me 40. They didn’t know my name, just 40.”

The sweet uniforms are not just about flossing, it’s about teaching his players the importance of uniformity and discipline.

And it’s about elevating their self-esteem and helping them see themselves through a different prism.

Those are among the reasons Sanders asked fellow Pro Football Hall of Famer Michael Strahan, who has his own line of clothing with Men’s Wearhouse, to outfit Jackson State’s entire football program with custom suits.

The navy blue suits have Jackson State’s logo in the lining, and each player has his name sewn inside the jacket.

Each player also received a box of ties from TwentyDollarTie, a company Sanders has partnered with to create his own line of ties.

“I was feeling like a boss. I had my shades on. I felt like a businessman going on a road trip,” Newman said. “He’s changing our mindset from a little-boy mindset to a grown-man mindset.

“He’s teaching us how to handle our business in the real world. You have to have a certain uniform. You can’t wear what you want to work.”

For Sanders, it’s all about the details. And it’s about making players feel good about themselves and what they’re trying to accomplish, whether it’s earning a degree or playing in the NFL.

“You should’ve seen the transformation. The positivity, the self-esteem, the self-respect, the dignity. The pride they took in those suits,” said Sanders, who added he didn’t get his first custom suit until he was in the NFL.

Sanders said he wants his players looking like professionals whether they’re going to a job interview or speaking to a company about an endorsement opportunity.

“We can control how a kid looks. Now, if we can control how he looks, that also has an influence on how he feels,” Sanders said. “And then if he feels good. … Oftentimes, he performs well. And that’s very important to young men, especially in our community.

Sanders picked out the Tigers’ uniforms and the coaches’ outfits for their first four games before the season even started.

The business of the season made him fall behind.

Buckley set three options for the coaches’ pregame outfit neatly on the floor of Sanders’ office Tuesday morning between a red bike and the red scooter Sanders uses to get around the building since his recent toe surgery.

Buckley wanted to make sure Sanders had plenty of time to decide the coaches’ wardrobe this week.

Shilo Sanders is ready to deliver big hits against opponents, then talk trash about it — ThePowerBloc