Draymond Green’s latest speech is a sign that white control of the Black athlete is in its final days.

From Jack Johnson to Jim Brown to Curt Flood to Colin Kaepernick, resistance has long been inseparable from the history of Black athletes. Over the decades, they have knocked down exploitation and inequality brick by brick. Now, athletes such as Green have their sights on the masters of a system that allows a group of nearly all-white team owners to act in ways that the owners – and much of the public – often refuse to accept from Black players.

Green’s comments were instigated by how the Cleveland Cavaliers treated center Andre Drummond. The Cavs, who recently acquired young center Jarrett Allen, are planning to trade Drummond, a two-time All-Star averaging 17.5 points and 13.5 rebounds per game this season. When the Cavs traveled to San Francisco Monday night to play Green’s Warriors, they decided to deactivate Drummond. He watched the game from the bench in street clothes, and apparently won’t play until he is traded. Cavaliers sources told ESPN that it’s unfair to Drummond to limit his minutes as the team gives more playing time to Allen.

Draymond Green sounds off on double standards between teams and players

Unfair to limit his minutes? Please. They just limited his minutes all the way down to zero. More likely is the Cavs don’t want Drummond to get injured and evaporate his trade value. The Cavs took him out of the lineup because it’s the best thing for their team. But if Drummond had demanded a trade and chose to limit his own minutes to do what’s best for Drummond – sort of like what James Harden just did in Houston – the narrative would have been much different.

Green used Harden as Exhibit A to identify the hypocrisy of players being lambasted for saying and acting like they want to leave a team, while teams can say or do whatever when they seek to trade a player.

“At some point, as players, we need to be treated with the same respect. And have the same rights that the team can have,” Green said. “Because as a player, you’re the worst person in the world when you want a different situation. But a team can say they’re trading you. And that man is to stay in shape, he is to stay professional. And if not, his career is on the line.”

Harden was criticized for the behavior he used to force his way to the Brooklyn Nets – I called him “selfish” – but as he told ESPN’s Rachel Nichols, “I had to do what I had to do in order to get to where I wanted to go.” What the Cavs are doing is selfish, too. Yet they are widely perceived as being smart about their business, while smart business is not part of the narrative for Harden, or LeBron James moving from Cleveland to Miami, or Anthony Davis forcing his way off the New Orleans Pelicans to play for the Lakers. When players flex their leverage, they get called disloyal, ungrateful or worse.

“We talk all of this stuff about, ‘You can’t do this, you can’t say this publicly,’ ” Green said. “If you say that publicly … Anthony Davis got fined [$50,000] for demanding a trade, but you can say Andre Drummond’s getting traded publicly and we’re looking to trade him publicly, and he’s to stay professional and just deal with it?”

Let’s be real: Many people resent the money that athletes make. They see a group of young Black megamillionaires, in all their tattooed, bejeweled, cornrowed glory, and want them to stay in their place. Yet those people don’t begrudge the money made by owners, who are far richer than the athletes. Owners are perceived to have earned it, while athletes are often thought to have lucked out in the genetic lottery – as if it doesn’t take years upon years of blood, sweat and tears to make the NBA.

The idea that Black athletes should be grateful for what they get extends to the NCAA, where players who generate billions in revenue – most of whom are Black – are told to be satisfied with the six-figure value of their scholarships. It’s not a coincidence that most white people oppose paying college players, polls show, while most Black people support it.

But the system of sports control has never been more vulnerable than now.

The Supreme Court will soon hear arguments about the limits the NCAA imposes on compensation to college athletes. Regardless of the ruling, more and more Black college athletes are refusing to accept how they have been treated by their conferences, coaches and the NCAA. NBA players now routinely change teams before their contracts have expired. In pro football, where players have the least leverage of any major sport, owners have recently been forced to accept players’ racial justice demands. Young Black superstar quarterback Deshaun Watson is in the process of forcing his way out of Houston because he was not substantively consulted, as most franchise players are, when major personnel moves were made. 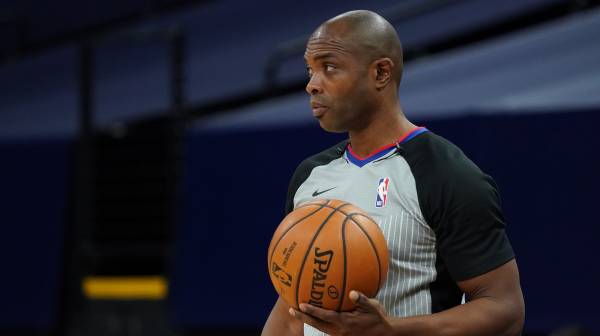 Speaking of Houston, it was Green who called out Texans owner Bob McNair for saying “we can’t have the inmates running the prison” as the NFL tried to prevent athletes from kneeling during the national anthem to protest racial injustice. (The NFL lost that battle.)

“For starters, let’s stop using the word owner and maybe use the word Chairman,” Green posted back in 2017. “To be owned by someone just sets a bad precedent to start. It sets the wrong tone. It gives one the wrong mindset.”

Now NBA players are starting to say that they should get a piece of the ownership pie. A new day is coming. It’s just a matter of time.

HBCUs are well-represented in NBA games, holding a referee’s whistle —