Deion Sanders talks about his recovery from toe amputations

Jackson State University head football coach Deion Sanders is opening up about his surgery where he had two toes amputated.

According to The Mississippi Clarion-Ledger, Sanders appeared on The Rich Eisen Show recently, where he told the host, “I’m not high-stepping yet, but the hand is behind the head. I’m moving slowly but surely, and I’m moving briskly, I really am.”

The surgery came during JSU’s 2021 season after doctors found blood clots in his leg that led to the amputation of Sanders’ big toe on his left foot and the one next to it.

“When I was in the hospital, I lost 40 pounds,” he told Eisen. “I wasn’t eating nothing but applesauce. Lost 40 pounds, but I gained 50 back. So now I can’t fit in my suits, so I have to trim down because I hadn’t been able to do cardio. I was eating everything in the world. I mean I was Chris Rock-ish at one point. I’m trying to get to the old Prime right now.”

He added that he’d also “fell in love” with Ensure drinks and was open to an endorsement with the meal substitute company. 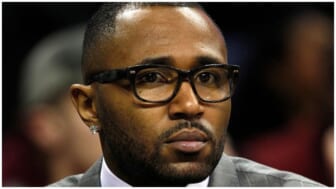 Sanders, the former NFL star who returned to coach his Tigers in a wheelchair, was recently named the winner of the Eddie Robinson Award winner, which is presented annually to college football’s top NCAA Division I coach. The late, great Grambling State University coach is honored in its title.

“It was crazy, man,” Sanders maintained. “We couldn’t tell anybody, we couldn’t say nothing to anybody. And then having a couple of my digits amputated at the same time and both of my legs dug out on the side. My kids told me it looks like a shark bit me on both sides of my legs. I don’t think you’ll see me in shorts anytime soon, but I’m better.”

In an interview with People, an orthopedic surgeon described Sanders’ condition and why it led to the amputation of his toes. Dr. Steven Sheskier did not treat Sanders but was familiar with his case, which had caused the former NFL star to develop a painful condition known as compartment syndrome. 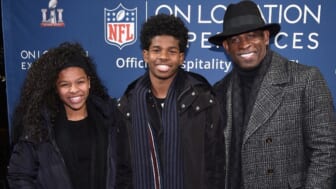 “Due to the clots, he wasn’t getting good circulation to his leg, lower leg and foot, and his calf muscle swelled up,” said Sheskier. “The fascia, which goes over the muscle, became extremely tight, crushing the muscle, veins and artery. That’s why he was in so much pain.”

“Ultimately they saved his leg, but the lack of circulation to the second toe and the first toe caused gangrene,” Sheskier continued. “More likely than not, the toes actually died. So they amputated those toes and closed it with some skin grafts.”