Naismith Memorial Basketball Hall of Famers Cynthia Cooper and Tina Thompson did just that. Cooper and Thompson have etched their names into WNBA history because of a litany of firsts, including the first pick in the inaugural WNBA draft (Thompson), first WNBA MVP (Cooper) and first WNBA Finals MVP (Cooper).

The two basketball legends are now coaching college teams who were to play against each other as coaches for the first time when Cooper’s Texas Southern Tigers (0-7) face off against Thompson’s Virginia Cavaliers (3-8) Wednesday in Houston. However, the game between Texas Southern and Virginia was cancelled due to COVID-19 protocols in the TSU program.

Cooper began her collegiate coaching career at Prairie View A&M in 2005 and had stints at UNC Wilmington, Texas Southern and Southern California before returning to Texas Southern in 2019. Cooper’s efforts at PVAMU earned her an induction into the Southwestern Athletic Conference (SWAC) Hall of Fame last weekend. Following her retirement from the WNBA in 2013, Thompson spent time as an assistant and associate head coach for the University of Texas before taking over at Virginia in 2018.

Cooper spoke with ThePowerBloc about her relationship with Thompson, playing against her alma mater USC and her induction into the SWAC Hall of Fame.

This interview has been condensed and edited for clarity.

How did the Texas Southern-Virginia game come to fruition?

We always want to play each other. We always want to, but it was a last-minute decision because Tina had some players that are from this area, and she was trying to get them back home for that Christmas time period. So she asked me if I could fit it in, and you know, anything for Tina. Tina’s my teammate, my fellow Hall of Famer. So that’s kind of how the game came about.

What were the players’ reaction once it was scheduled?

They know Tina ‘cause she’s popular. Tina’s cool. I’m not cool. So they’re looking forward to the game. They know our history. And I think that they’re so excited to see us go at it, as coaches. As well as them playing against a Hall of Fame coach like Tina Thompson.

How has your relationship with Thompson been over the years?

Tina and I, we talked. So we talk often and we have genuine [and] meaningful conversations. So even if we haven’t spoken in a little while because she’s been busy, I’ve been busy, when we get on that phone, it’s like there’s never been a break from us talking because we’re so authentic when we speak to each other. So I’m thrilled to be playing against her. I’m thrilled that she’s coaching and really passing on that torch and that passion for the game and the knowledge that she has for the game. All of that knowledge came over the arc of time in the WNBA. So I got a chance to watch her grow from a rookie, and then admire her as a Hall of Famer.

Have you and Thompson exchanged coaching advice over the years?

We spoke when she was at Texas several times. We bounced ideas off of each other and just had really frank conversations about the coaching business, recruiting and everything that goes into being a Division I college coach. Then she made the move over to Virginia. Tina doesn’t really need a lot. She does her own research [and is] her own person. I just wanted to be a resource for her, but at the end of the day, Tina made her own decision, because she’s that type of player and person and coach.

What are you expecting from a Thompson-coached basketball team?

Well, Tina herself was always not just a hard-nosed basketball player, a hard worker, [and] such a smart and savvy player. I’m expecting some of the same things from her team to really play hard and hustle, make all of the hustle plays, as well as execute because that’s what Tina did. As a Houston Comet and while she was at USC, Tina was a finisher. I’m sure that’s what she teaches her team as well, to be very, very competitive on every play.

What’s your fondest memory from playing with Thompson?

I think the fondest memory with Tina — she’s gonna say she didn’t do this — but she would be taking my moves. She’d be watching me. She’d say, ‘You know what, I got that Coop. I’m going to work on that.’ So she’ll work on it. The very next year, she’s using it in her game. That’s the great thing about Tina Thompson. She’s just a player that never arrived. She’s always confident [and] she was always getting better. She never felt like she had made it. She was working towards something greater every single day. 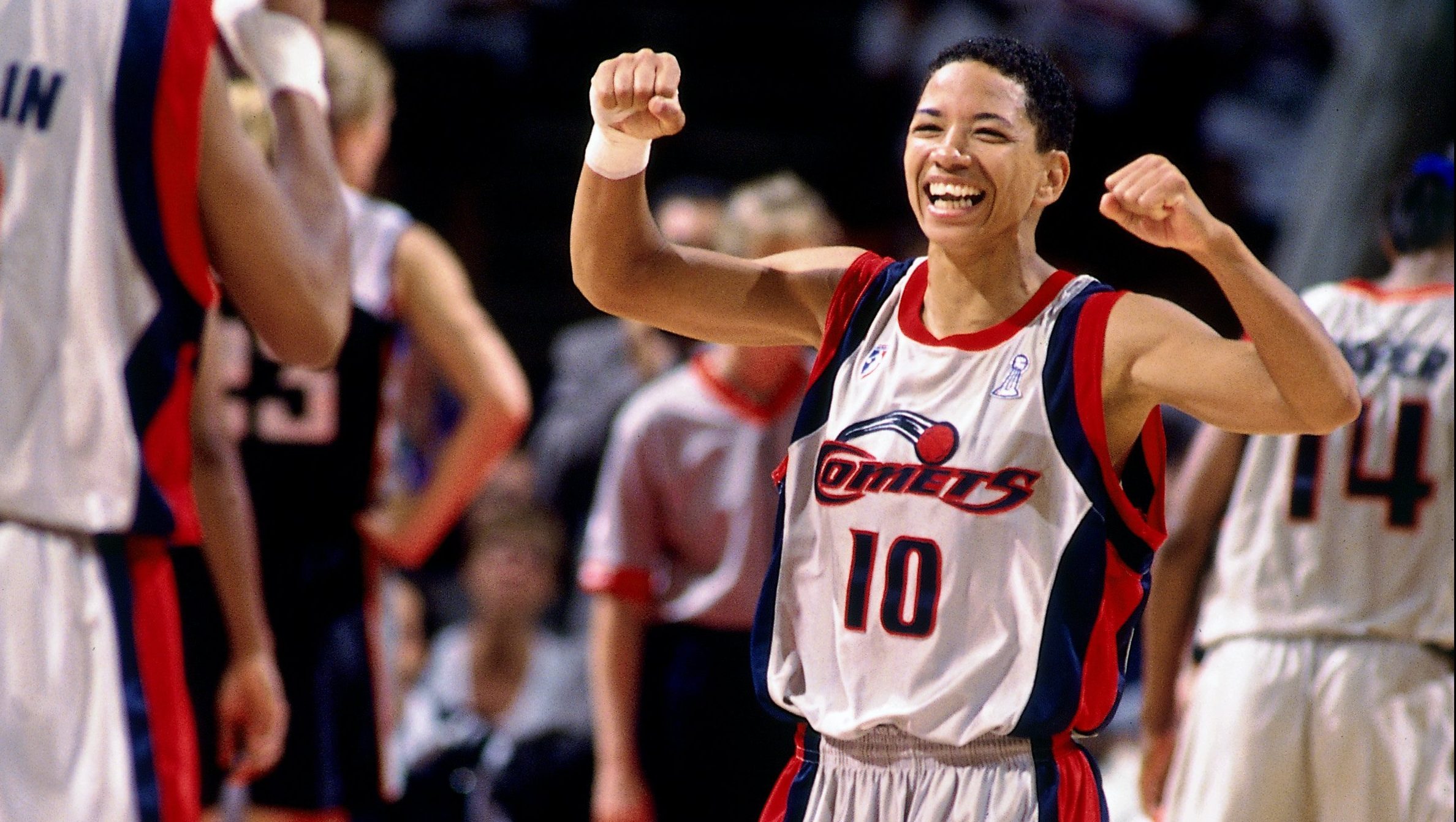 What was your favorite championship moment with Thompson in the WNBA?

Each championship was so unique. The first one was the first ever. Tina was a rookie, I was probably the oldest rookie in the league. It was just new [and] it was fun. The fans were so involved. In the second championship, no one believed that we could win the second championship because of the influx of the ABL players and they just thought the league was different. There’s so much more talent, there’s no way they can repeat. We did. Then that third year, it was so emotional because of our point guard Kim Perrot and [to] win No. 3 for No. 10. She passed away right before the beginning of the playoffs, and we didn’t know how that would affect us. The last championship was really the icing on the cake and that was the first championship of the new millennium. The bull’s-eye was on our back and we just came together. We didn’t have a perfect season. We came together and willed ourselves to that fourth championship in a row. I just think that’s the mark of a great team and I believe that we left an incredible legacy.

In addition to Virginia, USC is also on your schedule this year. How does it feel going back to LA to play the Women of Troy?

I always love to come back to SC because I’m a Trojan for life. Coach Lindsay Gottlieb is amazing, and I’m so glad they hired her. So I’m looking forward to going back to play not just in LA but at USC and at UCLA. I’m also excited to show the girls who’ve never been to LA Hollywood and Venice Beach and really give them an experience. Show them a little more than just going to college [and] a little more than just here in Texas, but give them an opportunity to see another part of the country. (The UCLA game was canceled because of COVID-19 concerns and TSU lost to USC 77-45 on Dec. 18.)

How was it transitioning into coaching at Prairie View and HBCU culture and traditions?

While I was at Prairie View, it was an eye-opening experience for me being at an HBCU [historically Black college and university] because you see everyone, they look like you, party like you, excited like you, [and] getting their education like you. It’s just a great environment. I saw my first probate where the fraternities and sororities are going, their lines are going. I was wide-eyed and videotaping everything, it was amazing. Football games, the band and how the band will put on their own little concert was just an amazing experience for me, and it still is every day.

How does it feel adding SWAC Hall of Famer to your resume?