Chris Rock and Will Smith onstage during the show at the 94th Academy Awards at the Dolby Theatre at Ovation Hollywood on Sunday, March 27, 2022. | Source: Myung Chun / Getty

Call it the slap heard ’round the world.

At least, that’s what it appeared to be after Will Smith confronted comedian Chris Rock after the 2022 Oscars host made a joke about the Academy Award-winning actor’s wife, Jada Pinkett Smith.

The version that American viewers saw Sunday night was censored, though not enough to keep people from seeing Smith march from the front row up on the stage to deliver five fingers of fury to Rock’s face after the comedian mocked Pinkett Smith’s acting career.

Those watching in America quickly heard audio disappear from the telecast, which was still filming live on TV and showing Smith — back in the comfort of his seat already — mouthing angry words in Rock’s direction, who was on stage looking stunned.

But viewers in Japan, in particular, and likely elsewhere outside of the continental United States, heard the raw, uncut version of the exchange following Smith’s confrontation of Rock.

“Will Smith just smacked the shit outta be,” Rock remarked in the unedited version that played live on Japanese TV.

It was also revealed that among the things Smith said to Rock was, “Keep my wife’s name out of your f*cking mouth!”

And, as if that wasn’t enough high drama, Smith ended up winning the best actor Oscar for “King Richard” and delivered an emotional acceptance speech without a single mention of Rock.

“Richard Williams was a fierce defender of his family, Smith said through tears about his role playing tennis icons Venus and Serena Williams’ father in the film. “Art imitates life. I look like the crazy father, just like they said about Richard Williams. But love will make you do crazy things.”

Describing Rock’s treatment as “abuse” celebrities must endure when “people talk crazy about you,” Smith said, “I’m being called on in my life to love people and to protect people, and to be a river to my people.”

Despite the histrionics, Rock and Smith were expected to try to resolve their differences following the eventful Oscars ceremony Sunday night. New York Post’s Page Six gossip page reported that Sean “Diddy” Combs played the peacemaker by speaking with both Rock and Smith, “who agreed to make amends.”

Tyler Perry and Denzel Washington also reportedly spoke to Smith, according to a tweet from entertainment journalist Scott Feinberg.

It was unclear if there was lingering animosity between Rock and Smith going into Sunday night. Smith apparently defended his wife from an unimaginative joke poking fun at her 1997 film, “GI Jane,” in which Pinkett Smith wears a closely cropped haircut similar to the one she currently sports. Rock suggested a sequel was in the works.

Pinkett Smith revealed late last year that she shaved her hair off because she was diagnosed with an autoimmune disorder that makes hair fall out.

“Now at this point, I can only laugh… y’all know I’ve been struggling with alopecia,” Pinkett said in a video posted to her Instagram in late December. “Just all of a sudden, one day,” she said pointing to a line on her hairless head. “So, it just showed up like that. Now, this is going to be a little bit more difficult for me to hide. So, I thought I’d just share it so y’all not asking any questions.”

It’s unclear if Rock ever saw that video.

Smith and his wife are not too far removed from their “entanglement” situation that saw Pinkett Smith admit that she had an extramarital affair. The end result was Smith being endlessly mocked on social media with cruel memes capitalizing on the moment he heard about the affair during Pinkett Smith’s popular Red Table Talk series on Facebook.

It is perhaps in that context that Smith, ever the chivalrous husband looking for the opportunity to defend his wife from unsolicited attacks in the name of comedy, decided to show the world just how much he loves his wife by walking on stage during the Academy Awards to smack “the shit outta” Chris Rock.

To be sure, this wasn’t the first time Rock and Pinkett Smith got some attention over the Oscars.

Back in 2016, Pinkett Smith announced plans to boycott that year’s Oscars ceremony amid a widening backlash against the nominations because of a lack of inclusion of people of color. Her announcement came after Rock took to Twitter to liken the Oscars to “The White BET Awards,” suggesting each was racially homogenous.

Rock ended up hosting that year’s Oscars and had some choice words for Pinkett Smith that Will Smith may not have ever forgotten.

The Oscars Still So White Despite Efforts To Diversify Hollywood 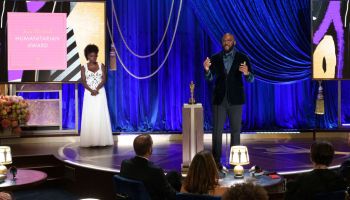