Former CNN anchor Chris Cuomo was reportedly under investigation for an allegation of sexual misconduct that contributed to his firing from the news giant, reports indicate.

Attorney Debra S. Katz released a statement about Cuomo’s firing on Sunday, claiming she represents a yet unnamed client who has plans to come forward with allegations of sexual misconduct against Cuomo. According to The New York Times, the accuser is a junior colleague at a different network.

Katz said her client was compelled to come forward after hearing the veteran journalist make on-air remarks mentioning concern about sexual harassment and sexual abuse issues in response to the revelation he may have helped his brother, former New York Governor Andrew Cuomo, by investigating several of the politician’s accusers.

“Hearing the hypocrisy of Chris Cuomo’s on-air words and disgusted by his efforts to try to discredit these women, my client retained counsel to report his serious sexual misconduct against her to CNN,” Katz wrote in her statement, which was shared on Twitter by Sarah Ellison of The Washington Post.

Katz added that she met with executives at CNN because her client “felt in sharing her story and related documentation, she could help protect other women.”

The attorney hinted that her client’s statements and resulting meeting were instrumental in Cuomo’s firing on Dec. 1.

Steven Goldberg, a spokesperson for Cuomo, denied the allegations in a statement, writing: “To the extent that they were sent to CNN to negate what Chris Cuomo told his audience, he fully stands by his on-air statements about his connection to these issues, both professionally and in a profoundly personal way. If the goal in making these false and unvetted accusations was to see Mr. Cuomo punished by CNN, that may explain his unwarranted termination.” 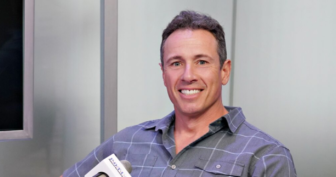 Cuomo was fired after an indefinite suspension when it was uncovered that he played a bigger role than previously understood in the investigation into the allegations against his older brother, who was then governor.

An investigation by New York State Attorney General Letitia James found Andrew Cuomo’s administration was a “hostile work environment” that was “rife with fear and intimidation.”

“Specifically, the investigation found that Gov. Andrew Cuomo sexually harassed current and former New York State employees by engaging in unwelcome and nonconsensual touching and making numerous offensive comments of a suggestive sexual nature, that created a hostile work environment for women,” James said at a press conference in August, per Associated Press.

CNN announced that it has retained outside counsel and will continue to investigate the issue, despite the termination, according to The New York Times.

“This is not how I want my time at CNN to end but I have already told you why and how I helped my brother,” Chris Cuomo said in a statement earlier on Saturday. “So let me now say as disappointing as this is, I could not be more proud of the team at Cuomo Prime Time and the work we did as CNN’s #1 show in the most competitive time slot.”