A privileged retired career military man who was equipped with plastic zip-tie restraints when he stormed the U.S. Capitol last week with the alleged intent “to take hostages” has been released from jail into the comfort of his own home.

A Texas judge decided that former Air Force Lt. Col. Larry Rendall Brock Jr. didn’t pose enough of a threat to society to keep him jailed despite his presence in the U.S. Capitol wearing full combat gear during an attempted armed and violent coup. Brock’s treatment in court stood in stark contrast to that of Black defendants who have been accused of far less than treasonous actions.

To be sure, Brock was shown “wearing a green helmet, green tactical vest with patches, black and camo jacket, and beige pants holding a white flex cuff, which is used by law enforcement to restrain and/or detain subjects.” Still, he was only charged with one count of knowingly entering or remaining in any restricted building or grounds without lawful authority and one count of violent entry and disorderly conduct on Capitol grounds — misdemeanors. So Magistrate Judge Jeffrey L. Cureton decided to release Brock to home confinement instead of keeping him detained.

It was unclear why Brock was not charged with armed insurrection, sedition, treason and/or attempting a coup d’état. However, the AP reported that he “will likely face additional charges.” It is also unclear whether Brock’s privilege of home confinement will be revoked once — if — those additional charges are ever filed.

Brock was arrested Sunday in Texas. He was reportedly fired from his job at an aviation firm in the Dallas area one day earlier.

Jacob Anthony Chansley, another person arrested for his role in the Capitol coup — the shirtless, tattooed man wearing a Viking-esque hat complete with horns — was identified as a leader of the conspiracy theory-embracing QAnon movement was proof that the suspected domestic terrorist mob, including Brock, intended to do far more harm than they actually did, according to the Washington Post.

Federal prosecutors in Phoenix wrote that “strong evidence, including Chansley’s own words and actions at the Capitol, supports that the intent of the Capitol rioters was to capture and assassinate elected officials in the United States government.”

Brock and Chansley are two of more than 100 people who have been arrested by the FBI for their roles as part of the insurrectionist mob that illegally broke into the U.S. Capitol on Jan. 6.

FBI Director Christopher Wray said on Thursday that his agency has gotten more than 140,000 tips and opened hundreds of case files, suggesting that many more arrests were coming in the days ahead as they also prepared to help secure the inauguration of President-elect Joe Biden in the same area where insurrectionists have vowed to return next week.

This writer is old enough to remember when the NYPD in 2010 wrongly arrested and jailed 16-year-old Kalief Browder at the infamous Rikers Island corrections facility over an unproven accusation of stealing a backpack from another teenager. Browder’s family couldn’t afford bail and he was not given the same privileges as Brock – an apparent insurrectionist who allegedly committed a crime against the United States – spending three years at the notorious jail, where he endured beatings from prison guards and inmates, as well as 400 days in solitary confinement.

Charges against Browder, who always maintained his innocence, were eventually dropped. Authorities released him from jail, but he was a physically and psychologically damaged young man. On June 6, 2015, Browder hanged himself with an air conditioning cord at his home. He was only 22. 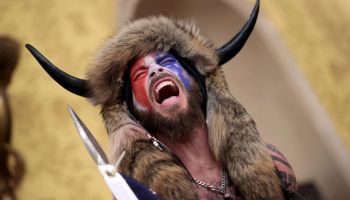