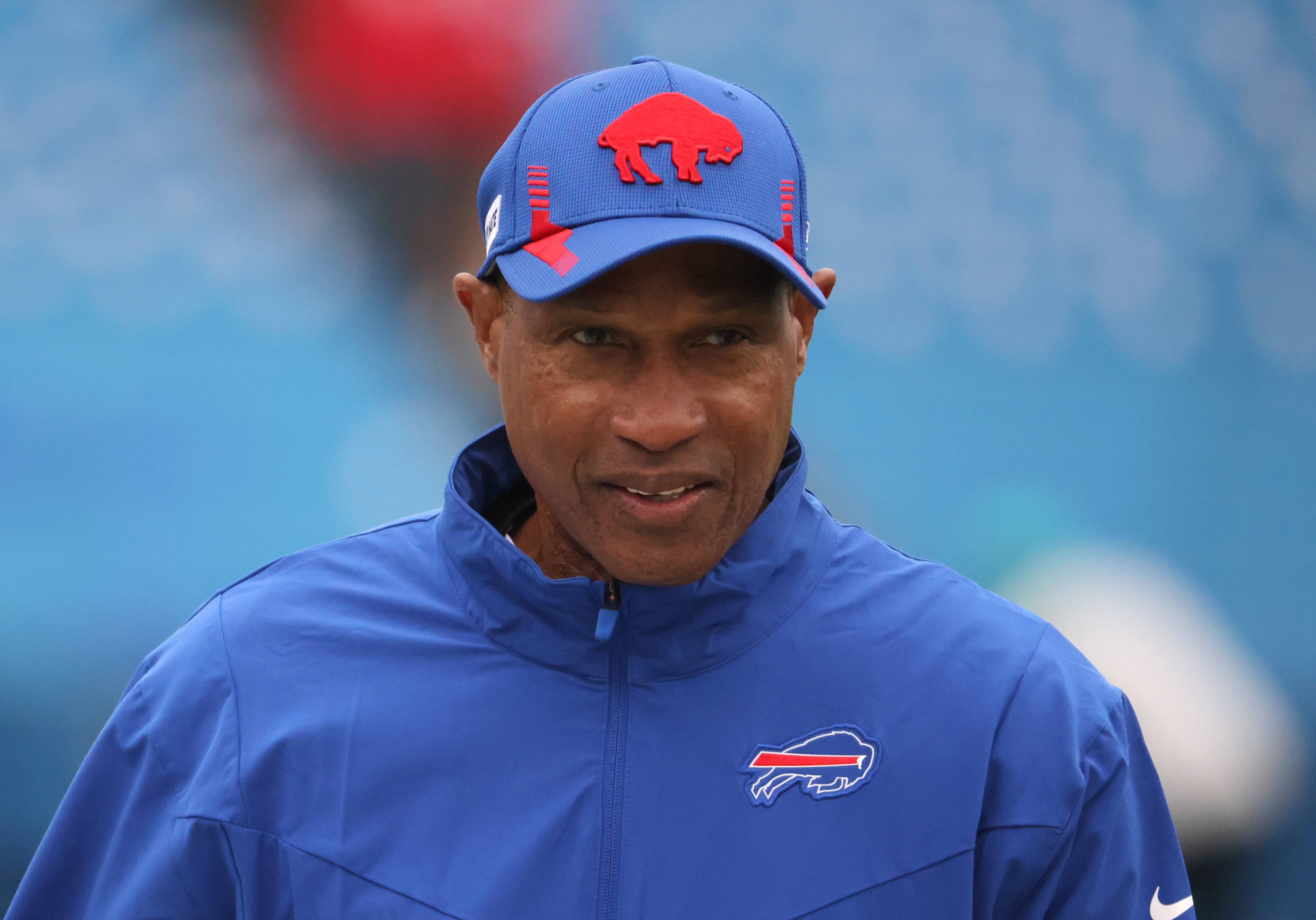 The first week of the postseason featured so many fabulous performances by Black coordinators, it was difficult to determine who shined brightest.

And they’re not done.

As the march continues toward the league’s signature event (Super Bowl LVI), nine African American coordinators will be in the spotlight again in the divisional round. They lead units on offense, defense and special teams — including all three phases of the game for the defending Super Bowl champion Tampa Bay Buccaneers. The NFL’s final eight teams have benefited immensely from empowering these talented, proven coaches.

But here’s the question: Will any of these smart, accomplished and dedicated Black men be offered opportunities to advance their careers in this hiring cycle as some of their white counterparts surely will?

Based on both the NFL’s recent and long-term history, it’s a fair question.

Professional sports’ most powerful league has an abysmal record on inclusive hiring at the club level, and the NFL’s frustrated African American assistant coaches received multiple gut punches at the outset of this cycle. After the Miami Dolphins and Houston Texans fired Brian Flores and David Culley, respectively, the NFL has only one more Black head coach in its 102nd season than it did in its first: one. Mike Tomlin of the Pittsburgh Steelers stands alone in a 32-team league whose player workforce is overwhelmingly Black.

With eight clubs searching for head coaches, officials in the commissioner’s office and the Fritz Pollard Alliance, the independent group that advises the league on matters of diversity and inclusion, have toiled behind the scenes in an effort to ensure that qualified candidates of color will be heavily in the mix for all of the openings. If franchise owners are interested, there are many great options from which to choose.

They need not look any further than at the teams still playing, said Troy Vincent, the NFL’s executive vice president of football operations. Vincent, commissioner Roger Goodell’s top lieutenant in the ongoing struggle to level the playing field, believes all of the coordinators still working are head-coaching timber.

“These coordinators’ units are dominating the field of play, yet the lack of equitable live exposure [to interview for head-coaching positions] is noticeable in comparison with their [white] counterparts,” Vincent wrote in a text message to . “These coordinators have proven sustainable success, as their units continue to rank among the top of the league in performance. They have demonstrated over the long term their wisdom, genius and ability to creatively innovate both strategically and tactically.

“A fundamental requirement in hiring a head coach boils down to trust. A great indicator of trust is the integrity of sustainable success, which this class of coordinators has exemplified season after season. This group of coordinators … [has consistently proven] they can … lead diverse personalities. They have highly honed relationship-management skills, and possess incredible situational awareness and clock management in high-pressure environments.”

To summarize, these brothas are getting it done.

After a regular season in which he directed a defense that limited Buffalo’s opponents to league-leading averages of 272.8 total yards, 163.0 passing yards and 17.0 points, Frazier played a key role in the team’s 47-17 blowout of New England in the AFC wild-card round. The game was all but over at halftime, with the Bills, who were clearly several steps ahead of the Patriots from the opening kick, holding a commanding 27-3 lead.

In five seasons under head coach Sean McDermott, Frazier has helped the Bills earn four postseason berths and win consecutive AFC East division titles. Widely considered one of the game’s best defensive strategists, Frazier led the Minnesota Vikings to one playoff appearance while serving as that organization’s head coach for three seasons, beginning in 2011. Reportedly, the Chicago Bears are expected to interview Frazier, who played cornerback for them for five seasons in the 1980s, as early as Friday for their top opening.

Over in the NFC, Morris, the Rams’ defensive coordinator, was in a groove as well.

The Rams routed the Arizona Cardinals 34-11 in the final wild-card game. The Rams held a 21-0 halftime lead while making life miserable for standout Arizona quarterback Kyler Murray in his first playoff game. In Morris’ first season guiding the team’s defense, the unit gave up 103.2 rushing yards per game to rank sixth overall.

Back in 2009, Morris was the league’s youngest head coach when the Buccaneers tapped him to lead them at only 32. The Vikings have reportedly requested permission to interview Morris, who was an interim head coach with the Atlanta Falcons last season. Morris could be in competition with Ryans and other African American assistants for Minnesota’s No. 1 job.

On Wednesday, Minnesota reportedly interviewed the fast-rising Ryans, who at 37 is the league’s second-youngest defensive coordinator. For the Vikings, after watching visiting San Francisco defeat Dallas in an NFC opening-round game, interviewing Ryans was a no-brainer. Against the Cowboys, the 49ers’ defense was outstanding from start to finish. The first-year defensive coordinator leads a unit that ranked among the top 10 during the regular season in total yards, passing yards, rushing yards and scoring. About a year ago, San Francisco head coach Kyle Shanahan moved quickly to replace defensive coordinator Robert Saleh, hired as the New York Jets’ head coach, promoting Ryans from his position as linebackers coach.

Ryans has been a rock star throughout his football career. With the first pick of the second round in the 2006 NFL draft, the Texans selected Ryans out of the University of Alabama, where he was the 2005 SEC Defensive Player of the Year and a consensus All-American linebacker. He didn’t disappoint as an NFL player, either.

A season after being selected the 2006 Associated Press Defensive Rookie of the Year, Ryans was a first-team All-Pro. As a coach, Ryans quickly climbed the ladder under Shanahan, starting as a defensive quality control assistant in 2017. Now, he’s interviewing to become a head coach.

“The encouraging thing we’re seeing this cycle is that … there have been requests made to speak with a good amount of candidates of color,” he said. “Hopefully, with the number of requests we’ve been seeing so far, that will result in more candidates of color interviewing, which is what we want. It was disturbing when we saw a number of coordinators go deep into the playoffs last season and not get the kind of attention they deserved.”

Despite all of Kansas City’s success the past four seasons with Bieniemy as the team’s offensive coordinator (the two-time defending AFC champion plays host to Buffalo on Sunday in the divisional round), Bieniemy hasn’t advanced to the next level as did his two white predecessors in the role — Doug Pederson and Matt Nagy — under head coach Andy Reid.

As Tampa Bay’s offensive and defensive coordinators, respectively, under head coach Bruce Arians, Bowles and Leftwich helped the franchise defeat Kansas City in Super Bowl LV. Yet with seven head-coaching openings in the previous cycle — and Bieniemy, Bowles and Leftwich having delivered in the best manner possible — only one Black assistant was hired (Culley, whom Houston fired after only one season).

Like Graves, American University law professor N. Jeremi Duru, a longtime observer of the NFL’s hiring practices, is pleased that Black coordinators whose teams are still in the playoffs are drawing more attention than in past seasons from franchises searching for new head coaches. But just as in any competition, what matters most is who finishes first, Duru said.

“No matter what you’re looking for to create your team’s identity under a new head coach, there are coordinators in the playoffs who fit the bill,” said Duru, author of the definitive book on the struggle that led to the creation of the Rooney Rule, Advancing The Ball: Race, Reformation, and the Quest for Equal Coaching Opportunity in the NFL.

“Those tacticians, those designers of the offense, the defense and the special teams … they’re right there. They’re waiting.”

Many have been for far too long as owners continue to view hiring in Black and white.