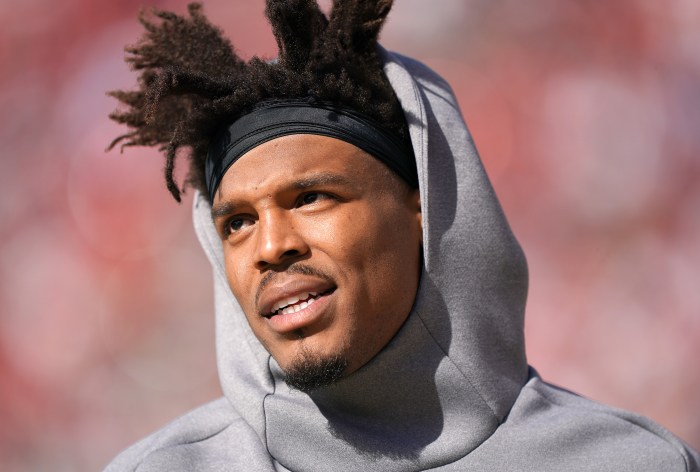 The North Carolina man made an emphatic score to put his team ahead in an emotionally charged return from an extended absence. As the former MVP swaggered off the playing surface, surrounded by his invigorated teammates and nearly drowned out by the sound of the uproarious crowd, he took in the scene.

As he continued his celebration, he emphatically yelled, to no one and everyone, “I’m back.”

This sounds like the aftermath of Cam Newton’s first touchdown back as quarterback of the Carolina Panthers last week against the Arizona Cardinals, right?

It’s actually a different man from an entirely different sport, but with a similar cautionary tale.

Golden State Warriors guard Stephen Curry missed multiple games early in the 2016 playoffs due to a sprained right knee. In his return in Game 4 of the Western Conference semifinals against the Portland Trail Blazers, the two-time MVP, who was raised in North Carolina, scored a game-high 40 points in a 132-125 overtime victory, punctuated by a long 3-pointer that preceded his declaration of return.

Aside from banging a drum at Carolina home games every now and then, Curry has nothing to do with Newton or the Panthers, but his similar announcement five years ago gives a perfect illustration of how being swept up in the moment by Newton’s return to the team that drafted him in 2011 may not be a harbinger for end-of-season success.

Because no matter how monumental and season-changing of an event that 3-pointer by Curry felt in Game 4, the fact remains that in the NBA Finals against the Cleveland Cavaliers, the Warriors infamously blew a 3-1 series lead, and Curry, not looking all that “back,” scored just 17 points in Game 7.

Newton’s performance in limited snaps in a 34-10 win over the then-top-seeded Cardinals after a season away with the New England Patriots brought back memories of the man who changed the direction of the Panthers franchise a decade ago. From 1995, the team’s inaugural season, to 2010, the Panthers made the playoffs just four times. After drafting Newton first overall in 2011, the team made the playoffs in four of the eight years that he was the season-long starter, including the magical 2015 season in which he won MVP and single-handedly led the Panthers to the Super Bowl.

His two touchdowns against Arizona — one on the ground, the other through the air — seemed to signal that Newton was back, both literally as an NFL player but also metaphorically as the once-again savior of the city. He is expected to start Sunday at home against Washington.

The humbling of Cam NewtonRead now

But, no matter how much of a feel-good story Newton’s return may be, realistically there’s reason to be skeptical of how much a physically declining 32-year-old can still bring to the table, particularly for a team that still has postseason expectations. As much as retro and nostalgia are currently in, nothing we’ve seen from Newton over the last year and a half would have us believe that he can turn the clock back to 2015.

Before last week’s game, the last we’d seen of Newton was of him being unable to throw the ball downfield. Due to years of constant beatings from defenders (between 2011 and 2020, Newton had the 23rd-most rushing attempts of any player), and multiple surgeries to his shoulder and ankle, Newton can’t physically throw or run the ball like he used to.

Last season, Newton averaged 7.0 intended air yards per pass attempt, tied for fourth-worst among quarterbacks with at least 300 attempts. That carried over into the 2021 preseason with New England, when he barely attempted passes over 10 yards down the field on the way to losing his starting job to rookie Mac Jones.

Newton also lost a step as a runner, likely due to some combination of age, attrition and a vegan diet that has taken some 20-30 pounds off his once-imposing frame. The Patriots essentially turned Newton into a running back in 2020, with him ending the season with 137 rushes, the second-highest total of his career, but with the second-lowest yards-per-carry average (4.3). Newton also still turns the ball over too much and takes unnecessary sacks.

All that being said, there were some positive signs in recent seasons. From 2011 to 2017, Newton had a 58.5 completion percentage, ranking 37th out of 40 qualifying passers in that time frame, according to TruMedia. From 2018 to 2020, that percentage increased to 65.9% (15th out of 39 qualifiers), with only a minor drop in how far he’s throwing passes. His 12 rushing touchdowns in 2020 were tied for fourth in the entire league, and he was tied for the 10th-most rushes (55) that led to a first down.

But watching Newton attempt to throw the ball showed how much damage surgeries had done to his arm strength. When Newton does attempt a deep ball, it looks as if it physically pains him to do so.

Not to mention how difficult it is for quarterbacks signed off the street to immediately step in and learn a new offense enough for the team to be successful. After the Arizona game, Newton was asked how much of the playbook he learned in the three days after being signed: “Two touchdowns’ worth.”

When it comes to quarterbacks brought in at the last minute, results can vary. Matt Barkley, signed by the Buffalo Bills on Oct. 31, 2018, made his first start on Nov. 11 of that year and completed 15 of his 25 passes for 232 yards and two touchdowns in a 41-10 win over the New York Jets. On the other hand, Josh Freeman had just 15 and five days, respectively, to prepare when he was signed by the Minnesota Vikings (2013) and Indianapolis Colts (2015); he combined for just a 43.2 completion percentage, 339 yards, one touchdown and two interceptions in two games.

But with all of Newton’s warts, he’s still Cam Newton. This is the dab. This is Superman. This is, Ted Ginn was my top receiver when I went to the Super Bowl. This is, “You’ve been watching film, huh? That’s cool. Watch this.”

There’s a way where, with seven games remaining in the season, it does work. I’m loath to lazily compare Newton to another Black quarterback, but the 2021 version of Newton is similar to the Panthers starting quarterback from a season ago, Teddy Bridgewater. Bridgewater has never been known for his arm strength but is accurate as a short and intermediate passer, and as he displayed for the first time in his career last year, he can run as well. Bridgewater’s ceiling may not be Newton’s floor, but at the very least it’s Newton’s elevated living room.

Over the next three games, Carolina faces mid- to bottom-tier passing defenses in the Miami Dolphins, Atlanta Falcons and Washington Football Team, the latter two ranking 28th (5.6) and 30th (6.1), respectively, in quarterback yards per carry allowed. (Newton, coming off his two-touchdown performance on Sunday, extended his NFL record for most games with a rushing and passing touchdown to 43, according to ESPN Stats & Information.)

The Panthers, stewards of a sixth-ranked scoring defense that is allowing the least passing yards per game (173.7) heading into Week 11, are currently 5-5, 1½ games behind the first-place Tampa Bay Buccaneers in the NFC South standings. If the playoffs were to start today, the Panthers would be the seventh seed. But Carolina also has one of the hardest remaining schedules, with its final four games coming against the Bills, New Orleans Saints and Buccaneers (twice). ESPN’s Football Power Index projects the Panthers as having a 21.6% chance of making the playoffs.

As was the case with Curry in 2016, Newton’s emotional return could make one believe that things will be exactly as they were before. But just as Curry would eventually shoot just 31.6% from the field in Game 7 of the Finals, Newton’s two touchdowns against Arizona may just be his high point as the rest of Carolina’s season plays out.