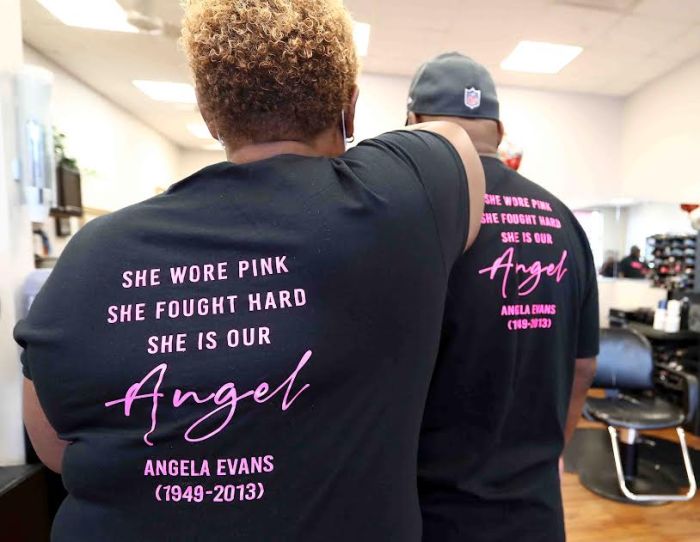 She was considered the diva of the family because of her stylish attire and affectionate personality. Angie Evans was a beacon of joy easily admired by Edwards, which made her death from breast cancer in 2013 so devastating.

“That ordeal was so crazy, knowing my mom’s sister was going through what she did,” said Edwards, who was in high school at the time. “I remember praying hard for her and hoping for the best. It was definitely hard for us all to go through, but I knew I had to be strong for the family.”

October is Breast Cancer Awareness Month, recognized annually to raise awareness about the impact of breast cancer. The NFL, among other sports organizations, hopes to bring attention to a disease that will kill about 43,000 women nationally this year, according to the American Cancer Society.

“She didn’t want to go to the doctor,” said Edwards’ mother Terri of her older sister. “She never had a mammogram. I encourage every woman to have one, because early detection saves lives.”

Unfortunately, that was not the case for Evans. In 2012, Terri Edwards received a call from her nephew at the hospital that Evans was diagnosed with breast cancer.

Evans’ cancer quickly reached a critical stage. The family rallied in support of her. When her health allowed, she’d spend time with her sister and feast on her favorite breakfast prepared by her brother-in-law.

Eventually, her health worsened. After time in the hospital and hospice, she died.

“We didn’t know anything was wrong with her,” Terri Edwards said. “She was one of those old-school people that didn’t go to the doctor. I think about it all the time. If she would’ve told me something was wrong, I would’ve made sure she was examined, and she could possibly still be here.”

Edwards was going into his senior year at Winton Woods High School in Cincinnati at the time of his aunt’s death. Once he learned about the significance of October, Edwards decided to do his part to honor her by wearing a pink mouthpiece and pink gloves.

Edwards continued the tradition when he enrolled at the University of Kentucky.

“I wanted to continue to pay tribute to her with the mouthpiece and the gloves, especially in October,” Edwards said. “But after October, I continued to wear the mouthpiece.”

The mouthpiece was just the beginning, especially for the family. For the past six years, Edwards’ father, Mike Edwards Sr., has raised money for the American Cancer Society by conducting a raffle for his son’s Kentucky jersey. Edwards Sr., a barber, and his wife also participate in Cincinnati’s annual walk for breast cancer. As always, the couple will wear T-shirts with Evans’ image on the front and “Team Angie Evans” on the back.

“Unfortunately, my son hasn’t been able to participate in the walk because he played on Saturday in college and plays on Sundays now,” Edwards Sr. said. “But we always FaceTime him while we’re on the walk, so he can participate with us.”

Edwards’ participation at Kentucky resulted in a career where he became only the 19th player in school history with 300 tackles. His 317 tackles are second all time among defensive backs. As a junior, he led the team in tackles and interceptions, only the fourth Kentucky player to achieve that feat. And, as a sophomore in a game against Louisville, he intercepted then-future Baltimore Ravens quarterback Lamar Jackson twice.

Edwards’ play in college led to him becoming a third-round pick of the Buccaneers in 2019. In only his second year, he earned his first Super Bowl ring in his team’s 31-9 victory over the Kansas City Chiefs.

“That’s so crazy,” said Edwards, about winning a Super Bowl in only his second year. “There are guys that play an entire career and never get a chance to play in the Super Bowl, and I was fortunate to win one.”

During last season’s Super Bowl run, Edwards intercepted future Hall of Fame quarterback Drew Brees during the divisional round of the playoffs. Edwards caught the final pass of Brees’ career.

Edwards continues to make noise in his third year. He began the season in impressive fashion when he returned two interceptions for touchdowns during the Buccaneers’ Week 2 victory over the Atlanta Falcons on Sept. 19. He was named NFC defensive player of the week for his effort.

Early in the fourth quarter, Edwards caught a tipped pass and ran 31 yards for his first NFL touchdown. Later in the game, Edwards blitzed and caught another tipped pass, returning it 15 yards for a touchdown to help seal the victory for Tampa Bay.

“When I caught the second one, I turned around and backpedaled into the end zone,” Edwards said. “For some reason, I got a taunting penalty. Besides the Super Bowl, those pick-sixes have been the highlight of my career.”

Edwards can only imagine how his aunt would’ve reacted to the highlights of his young career.