Less than a year after Stacey Abrams helped flip the state of Georgia blue for the first time in decades, that state’s Republican governor apparently thinks attacking her will somehow translate to his re-election.

At least, that was the indication based on Georgia Gov. Brian Kemp‘s first ad for his re-election campaign.

Released Friday and called, “No Backing Down,” Kemp — who in 2018 barely edged Abrams in a gubernatorial election despite credible reports of voter suppression in predominately Black voting precincts — takes aim at his former rival candidate by blaming “Stacey Abrams and the liberal mob” for MLB’s All-Star game being moved out of Atlanta.

Kemp started off the ad by saying in his trademark southern drawl, “This week, we should be celebrating baseball.”

The MLB All-Star game is this weekend in Denver.

It was a strange platform on which to base his first campaign ad for re-election, what with all the other pressing issues facing Georgia, including and especially spiking gun violence in its capital city.

Stacy Abrams accepts her award at the 3rd Annual Urban One Honors on May 16. | Source: TV One / Getty

Abrams emerged as Republicans’ main villain over MLB’s decision back in April. Kemp and House Speaker David Ralston said Abrams and President Joe Biden told “lies” about the election laws to get MLB to move the game out of Georgia. Just like with Kemp’s ad, though, Republicans did not mention MLB’s role and ability to make its own independent decision based on existing and undeniable facts.

Kemp has spent the better part of the last decade trying to position himself as being on the right side of elections. And Ralston made it clear last spring during the pandemic primary he was opposed to widespread absentee ballot use. As NewsOne previously covered, the new election laws in Georgia do the exact opposite of what Kemp and Ralston claim.

For her part, Abrams said she respected the decision to boycott the All-Star game but was disappointed in MLB’s decision. Abrams said she would like to see more corporations speak up on attacks on voting rights and democracy. In an op-ed published in April, Abrams laid out her challenge to those wanting to stand on the right side of history, including supporting the passage of federal legislation and stopping the passage of bad bills in other states.

In its statement, MLB reaffirmed its commitment to fair access to voting.

“Major League Baseball fundamentally supports voting rights for all Americans and opposes restrictions to the ballot box,” MLB Commissioner Rob Manfred said in early April. He said moving the game was “the best way to demonstrate our values as a sport.”

Nevertheless, in the new ad, Kemp insists “we made it easier to vote.” He said with a straight face that “secure, accessible fair elections will always be what has remained the foundation of who we are as a state.” He added: “And I’m not backing down from this fight.”

Watch the ad below.

While he may not be showing fear, Kemp has every reason to be scared of Abrams, who has emerged as a voting rights champion and a rising star within the Democratic Party. In an indication of just how much power Abrams yields in political circles not in Georgia but also across the country, her Fair Fight organization has raised more than $100 million since her gubernatorial defeat in 2018. Fair Fight said on Thursday it had raised an additional $6 million in the last five months alone.

It was that kind of war chest that helped get out the vote in the 2020 election and flip Georgia blue for the first time in nearly 30 years — something for which Abrams was readily and widely credited for making happen.

Also, in a bad sign for Kemp, he remains on the outs with former President Donald Trump, a Republican kingmaker whose stranglehold on conservatives could result in his endorsing another candidate, which could cripple Kemp’s campaign. Just two weeks ago, Trump suggested that Republicans would have been better off with Abrams as governor, not Kemp.

One person who Trump could support might be Vernon Jones, the Black former Democrat-turned-Republican who has already declared his candidacy and raised $650,000 over the past 10 weeks to challenge Kemp.

A poll from May indicated that Jones was closing the gap on Kemp.

Of course, chances are that all of that would be irrelevant if Abrams declares her candidacy, something that would likely make her the overwhelming favorite to win. 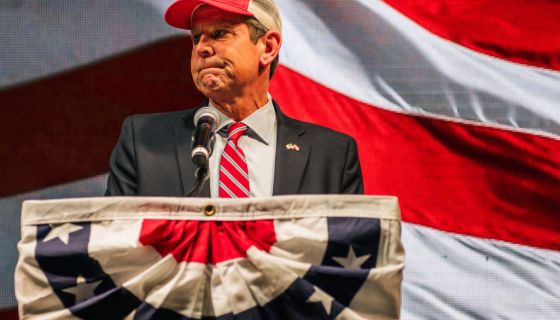 Texas Reps. Sheila Jackson Lee and Al Green could face-off due to Republican…

Baltimore Mayor Brandon M. Scott says Lamar Jackson can be a game-changer in his…