Breonna Taylor‘s life and death will be explored in an upcoming documentary episode headed for FX and Hulu.

According to FOX29, the episode is called “The Killing of Breonna Taylor” and it will air Sept. 4 at 10 p.m. ET on FX and be available for streaming the following day on Hulu. The episode is part of a new docuseries produced by The New York Times called “The Weekly.”

Filmmaker Yoruba Richen directed the episode and she wrote on Twitter that she was “thrilled to be directing this important film.”

Taylor was fatally shot in her home by the Louisville, Kentucky police on March 13. The 26-year-old emergency medical technician was shot multiple times by cops who entered her home on a no-knock search warrant relating to a drug investigation. After Taylor’s boyfriend, Kenneth Walker, fired one shot and hit Sgt. Jonathan Mattingly, believing the cops were intruders, the police returned fire. Taylor was hit multiple times and died in her hallway. Taylor was unarmed and no drugs were found in the home.

Mattingly and two other officers, Myles Cosgrove and Brett Hankison, were placed on administrative reassignment after the shooting. Hankison was eventually fired with interim police chief, Robert J. Schroeder, writing in a letter that Hankison “displayed an extreme indifference to the value of human life” by “wantonly and blindly” firing 10 rounds.

“These rounds created a substantial danger of death and serious injury to Breonna Taylor and the three occupants of the apartment next to Ms. Taylor’s,” Schroeder wrote.

Taylor’s death has sparked protest across the country, especially since it’s been over five months since her death and no one has been charged. At first, Taylor’s family seemed hopeful a few weeks ago that Kentucky Attorney General Daniel Cameron would bring charges against the cops involved in Taylor’s shooting.

However, after Cameron’s highly scrutinized speech at the Republican National Convention last week, the fate of the investigation seemed to be up in the air again. The case continues to lag even after Cameron’s office received the long-awaited FBI ballistics report he claimed was critical to the case. Cameron said that the report is still not the “end-all, be-all” on CBS’ “Face the Nation”, however, and he still wants to meet with the FBI to look over the report and to go through more witness testimony.

Meanwhile, “The Killing of Breonna Taylor” documentary will include interviews with dozens of people, including Taylor’s boyfriend, her mom, Tamika Palmer, witnesses, and public officials, according to the Times.

Violent White Folks Who Were Arrested With Loving Care By Police 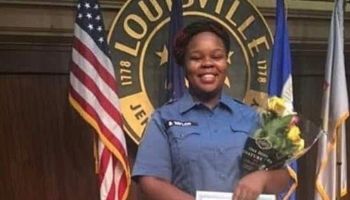