Bill Cosby was celebrating on Tuesday what could become a major victory after the Pennsylvania Supreme Court heard arguments over whether certain witnesses at the trial that led to his conviction for sexual assault should have been allowed to testify against him.

The hearing centered on “prior bad acts” testimony from accusers who were not plaintiffs in the case that stemmed from the disgraced comedian’s own deposition that eventually prompted criminal charges.

The Pennsylvania Supreme Court justices seemingly took turns challenging the prosecution’s claims that there is legal precedent allowing such testimony about “prior bad acts” that ultimately compelled a jury to convict Cosby.

The Court was restricted to only reviewing two facets of witness testimony during Cosby’s two criminal trials.

One of those facets is based on the trial judge’s decision to allow accusers other than plaintiff Andrea Constand to testify about alleged “prior bad acts” by Cosby that never materialized in any criminal charges. Cosby’s lawyer, Jennifer Bonjean, argued Tuesday that doing so was prejudicial and should render that testimony inadmissible.

“A defendant must be tried for what he did and not who he is,” Bonjean argued. “Once the jurors heard the five women’s accounts, she argued, “He had no shot. The presumption of innocence just didn’t exist for him at that point.”

The other aspect reviewed stemmed from Cosby’s infamous 2006 deposition during which he claimed former Montgomery County prosecutor Bruce Castor at the time offered him immunity in exchange for the comedian’s testimony. Cosby’s lawyers maintain that he never would have testified had he known his words would be used against him in court, which they say amounts to a violation of his constitutional right against self-incrimination.

“I tend to agree this evidence was extraordinarily prejudicial to your client,” Justice Max Baer told Cosby’s attorney at one point.

There was also some pushback from the judges about five women testifying against Cosby’s alleged “prior bad acts” to them. The prosecution maintained Tuesday that there was “overwhelming evidence” against Cosby without their testimony, prompting Chief Justice Thomas Saylor to question just how true that claim was.

In response to prosecutor’s arguments in #BillCosby hearing that the evidence of his crime was overwhelming, Chief Justice Saylor responds:
“If that was true, why’d you need five witnesses?” pic.twitter.com/XWnPzMOKeh

Justice Kevin Dougherty noted that one of the five witnesses who testified against Cosby said she was not the victim of sexual assault, suggesting that should have precluded her from taking the stand.

Justice Dougherty mentioned one of the women in the prior bad acts did not allege sexual assault.

ADA describes this as the incident of Maud Lise-Lotte Lublin, where Cosby invited a 23-year-old to sit between his legs and stroking her hair.

It was untoward, she says. pic.twitter.com/P3TcW8DeR0

Addressing that same line of reasoning, Justice Debra Todd asked Jappe: “Why did you need prior bad acts evidence at all?”

Steve Greenberg, the former defense lawyer for R. Kelly, noted that it seemed like “the Supreme Court is very receptive” and applauded Cosby’s legal team.

Seems like the Supreme Court is very receptive to @BillCosby arguments. His lawyer is doing a great job @BonjeanLawGroup

All of the above apparently inspired hope for Cosby, who did not attend the hearing and remains locked up at the State Correctional Institution – Phoenix prison in nearby Collegeville, Pennsylvania.

“This morning, people around the world witnessed a beautiful presentation by Attorney Jennifer Bonjean regarding two (2) important issues — Immunity & the misuse of a law called, 404 (b) or PBAs (Prior Bad Acts Witnesses),” a statement attributed to Cosby and sent from his right-hand man, Andrew Wyatt, said in part. “This was not just an historic day for me, Bill Cosby, but it became a beacon of hope for those countless American Citizens of the Keystone State in Pennsylvania Correctional Facilities, whose constitutional rights might have been grossly abused because they lacked resources and means to fight prosecutorial corruption. I’m so happy because I hope and truly believe that justice will prevail.”

The Pennsylvania Supreme Court could take months to return a decision.

Cosby’s appeal for his verdict to be reviewed was accepted by the Pennsylvania Supreme Court back in June. The development over the summer suggested the imprisoned and disgraced comedian’s conviction could ultimately be overturned.

Wyatt has maintained that the “false conviction” was race-based.

“As we have all stated, the false conviction of Bill Cosby is so much bigger than him — it’s about the destruction of ALL Black people and people of color in America,” Wyatt said in June. “We’re extremely thankful to our attorneys for their tenacious efforts in fighting for the vindication of Mr. Cosby.”

The 83-year-old has already served more than two of his three- to 10-year prison sentence after being convicted of sexual assault in 2018.

Cosby was convicted of three counts of aggravated indecent assault for drugging and assaulting Constand at his suburban Philadelphia home in Elkins Park in 2004. He was sentenced following a guilty verdict during a re-trial after his first one ended in a mistrial in 2017.

“Bill Cosby took my beautiful, healthy, young spirit & crushed it,” Constand told the court during Cosby’s sentencing. “He robbed me of my health & vitality, my open nature, and my trust in myself & others.”

Cosby had also been trying to secure his release from prison over coronavirus concerns. His age alone makes him vulnerable, not to mention how the virus has flourished in the American prison system. Ten percent of Pennsylvania’s total prison population is geriatric. If anyone in that group contracts the virus, those prisoners would have to be sent to already over-stressed medical facilities, which are often in rural areas.

“Without immediate action, jails and prisons will be the epicenter of the pandemic,” said Nyssa Taylor, policy counsel for the American Civil Liberties Union of Pennsylvania.

The testimony in question was sealed for nearly a decade until the Associated Press requested it be made public as dozens of women came forward with similar allegations of sexual assault and drugging. That led to Montgomery County District Attorney’s Office in 2015 revisiting Constand’s complaint from 2005 with just two months to spare before the statute of limitations would have expired and exempted Cosby from prosecution.

Should Bill Cosby Be Released? Coronavirus Is Reportedly In His Prison 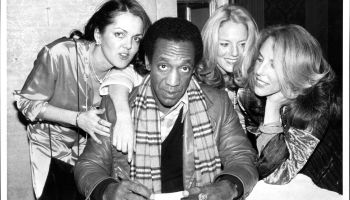