The Biden administration is increasing federal support for COVID-19 testing for schools in a bid to keep them open amid the omicron surge.

The White House announced Wednesday that a dedicated stream of 5 million rapid tests and 5 million lab-based PCR tests will be made available to schools starting this month to ease supply shortages and promote the safe reopening of schools. That’s on top of more than $10 billion devoted to school-based tests authorized in the COVID-19 relief law and about $130 billion earmarked in that law to keep kids in school.

Education Secretary Miguel Cardona said students need to be in their classrooms and the announcement shows the administration’s commitment to helping schools stay open.

“We’re doing everything we can to make sure that our children have an opportunity to stay in school,” Cardona said Wednesday on “CBS Mornings.” “That’s where they need to be, and we know we can do it safely.”

States are applying to the Centers for Disease Control and Prevention for the tests, Cardona said, adding that he expected distribution to begin as early as next week.

“We recognize that schools are the hubs of the community” and they should be open for instruction, the secretary added, saying it is “vital for our students.”

The push is part of the Biden administration’s wide-ranging efforts to expand supply and accessibility of COVID-19 testing as it faces mounting criticism over long lines and supply shortages for testing nationwide. The White House on Wednesday announced that Dr. Tom Inglesby, the director of the Johns Hopkins Center for Health Security at the Bloomberg School of Public Health, is joining its COVID-19 response team to oversee its testing initiatives. 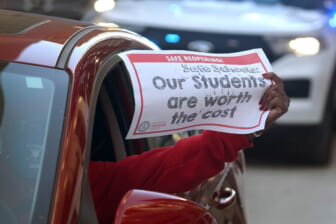 Starting on Saturday, private insurers will be required to cover the cost of eight at-home COVID-19 tests per month for covered individuals, and the administration is nearing the roll-out of a new website to allow Americans to request what will eventually be 500 million free tests that can be shipped to their homes.

The increased supply testing, though, will likely be too late for many Americans trying to safely navigate the omicron-fueled case surge, which is already showing signs of cresting.

The school testing initiative announced Wednesday comes after the nation’s third-largest public school system, in Chicago, closed for days after an impasse between teachers and officials over reopening policies. The closure was a black eye for President Joe Biden, who made reopening schools — and keeping them open — a priority.

“We have been very clear, publicly and privately, that we want to see schools open,” White House press secretary Jen Psaki said Monday. She cited the massive amount of funding for schools as evidence of the administration ensuring “we were prepared and had resources needed to address whatever may come up in the pandemic.”

The new crop of tests is enough to cover only a small fraction of the more than 50 million students and educators in the nation’s schools. The administration hopes the tests will fill critical shortfalls in schools that are having difficulty securing tests through existing federal funding or are facing outbreaks of the more transmissible COVID-19 variant. 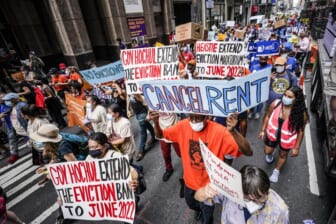 Additionally, the CDC is set to release new guidance later this week to help schools implement “test-to-stay” policies, in which schools use rapid tests to keep close contacts of those who test positive in the classroom.

Have you subscribed to the Grio podcasts, ‘Dear Culture’ or Acting Up? Download our newest episodes now! TheGrio is now on Apple TV, Amazon Fire, and Roku. Download theGrio today!