US President Joe Biden, with Vice President Kamala Harris (L), speaks about the Child Tax Credit relief payments that are part of the American Rescue Plan during an event in the Eisenhower Executive Office Building in Washington, DC, July 15, 2021. (Photo by SAUL LOEB / AFP) (Photo by SAUL LOEB/AFP via Getty Images)

Editors Note: Byron Allen, who is Black and American, is the CEO of Allen Entertainment Group, the parent company of theGrio.

The Biden administration is falling short when it comes to its equity efforts in its media advertisement buys targeting the Black community. In fact, white-owned media companies targeting Black audiences are receiving federal dollars at exponentially higher rates than Black-owned media.

The federal media advertising campaign focused on COVID-19 public education and awareness at the U.S. Department of Health and Human Services (HHS) is only one example.

These findings from HHS were in response to a letter sent to President Joe Biden by Democratic U.S. Congressman Hank Johnson of Georgia. In his letter, Johnson questioned the government’s advertising spending with Black-owned media—which reaches a critical base of the Democratic Party—and found them to be grossly under contracted when the federal advertisements are spent in comparison to Black-targeted media that are white-owned.

“Unfortunately, the failure of the federal government to spend COVID-19 advertising dollars with Black-owned media and advertising firms is simply the continuation of a problem that has existed for years,” Johnson wrote in his March 2 letter to President Biden that was obtained by theGrio. “We appreciate that your administration met with leaders in Black-owned media to discuss this topic in early 2021, however, we are not aware of any action that resulted from this meeting and the problem continues to undermine Black-owned businesses.”

Congressman Johnson told theGrio exclusively, “The federal government has historically failed to spend federal advertising dollars with Black-owned media and advertising firms, which has led to messaging not being effectively disseminated to the Black community.

He added, “Life and death consequences arise when, for instance, Black communities are not effectively messaged about COVID-19 relief funding, the availability of PPP, the need for frequent testing, and the efficacy of vaccines. Moreover, Black-owned media and advertising agencies being excluded from federal contracting opportunities are a vestige of Jim Crow racism that must be ended now.”

Johnson, who sits on the U.S. House Committee on Oversight and Reform, requested in his letter that the Biden administration reinstate President Bill Clinton’s Executive Order 13170, which ensured nondiscrimination in federal procurement opportunities for minority businesses.

The executive order required federal departments and agencies to ensure that Small Disadvantaged Business Programs (SDBs) and Minority Business Enterprises (MBEs) are included in the procurement of federal contracts. Under Clinton’s order, federal agencies were required to pay fair market rates and ensure advertising be equitably placed with media companies owned by minorities.

According to Congressman Hanks, Clinton’s executive order was revoked under President George W. Bush. It was later reinstated by President Barack Obama, only to be revoked yet again by President Donald Trump.

The data shared in the HHS letter in response to Congressman Johnson revealed that corporate white-owned media like BET (owned by Viacom), Spotify, the Oprah Winfrey Network (majority-owned by Discovery), and even the morning radio show, The Breakfast Club (owned by iHeart Media)—which all target Black audiences—have raked in tens of millions of dollars more than Black-owned media.

In total, HHS said that 18% (approximately $65 million) of the COVID-19 public education campaign was spent targeting Black audiences overall. Despite the disparity of that 18% between white-owned companies that target Black audiences and Black-owned media, the administration touted that the federal ad buy campaign is “well beyond parity for the Black community, which makes up approximately 13 percent of the U.S. population.”

When it comes to Black-owned media that has received funding from the Biden Administration, Dr. Ben Chavis, head of the National Newspaper Publishers Association (NNPA) told theGrio that in total his organization and its member newspapers have “received several million dollars” in ads — primarily from Health and Human Services.

Sources close to the matter exclusively offered theGrio some hard figures as it relates to the HHS advertising buy campaign for Black media outlets. TV One, Urban One and CleoTV, all owned by Cathy Hughes, received $924,000, $89,000 and $924,00 respectively, theGrio received $32,500, WVOK-FM received $8,000, and Core Communications received $50,000.

On Monday, members of the Congressional Black Caucus met with President Biden at the White House. The issue of the number of federal dollars spent on Black-owned media is said to have been one of the items on the agenda discussed along with other equity-related issues.

Sources close to the issue told theGrio that under the Biden White House, Black-owned media buys have increased by over 5% (approximately $20 million) compared to where they were in prior administrations at 2%. This increase, they argued, shows that Black media is not shut out completely. But the amount of federal dollars spent on Black-owned media remains chump-change when compared to what other media outlets are receiving. White House sources contend they can and must do better. 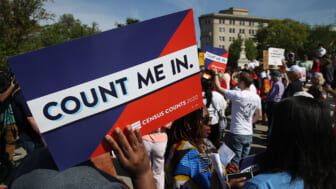 A number of sources close to this issue say the administration has ad buys for organizations that have a large reach. However, HHS and Biden administration sources credit their efforts at advertising with Black-owned media and white-owned, Black-targeted media as the reason for closing the vaccine disparity gap. Cumulatively, the reach of Black-owned media is extraordinary. TheGrio alone has an average reach of 7.5 million people every month.

There have been conversations both casual and high level on the issue of equity and increased federal contracts with Black and minority-owned businesses. During the 100th anniversary of the Tulsa Race Massacre in Oklahoma commemorating Black Wall Street, President Biden announced a new goal of doing just that. Tulsa became the backdrop for the push for President Biden to create an executive order in support of more federal advertising dollars going to Black-owned media.

Congressman Johnson’s letter urging the Biden administration to increase its spending with Black-owned media has been signed by 35 members of the Congressional Black Caucus. Those who signed the letter include:

The letter’s signees noted that the Government Accountability Office found that, over a five-year period, the federal government spent more than $5 billion on advertising. Black-owned businesses received only $51 million, or 1.02 percent, of that total spending.

The administration believes it has increased Black-owned media buys by over 100%, however, the recent complaints from members of Congress and Black media owners have been loud. The issue has become a frequently asked question on media calls with Biden officials like White House senior advisor Cedric Richmond.

The subject is a sensitive one due to a conflict of interest to directly ask a White House official for money while also covering the administration. Such was the case when American Urban Radio Networks (AURN) Correspondent Ebonee McMorris earlier this year asked Richmond about White House advertising money for Black-owned media while on a call with a host of Black journalists.

AURN during its heyday had hundreds of FM and AM radio stations with affiliates playing their news product, but it now has less than 35 such stations at last count. Most of those stations are on the radio AM band.

During another press call with Richmond, Roland Martin, CEO of Nu Vision Media, asked a more nuanced question on this matter citing the letter by Congressman Johnson. The White House said they would get back to Martin offline.

Martin acknowledged to theGrio that he received $250,000 from the United States Census in September of 2020, which is separate from the HHS ad buy campaign received by Black-owned media companies. He also expressed vehemently that he publicly acknowledged that money on his internet show last year.

Media mogul Byron Allen, who owns theGrio, has been beating the drum about the great disparity in advertising dollars corporations and even the federal government give to mainstream media versus Black-owned media.

Allen has been leading the charge over the past few years putting American corporations like General Motors and McDonald’s on notice over their paltry advertisement spending with Black-owned media – all while these companies reap great profits from Black consumers.

Allen has since sued McDonald’s Corporation over this matter. As for GM, officials are said to have refused to give Allen any ad dollars and instead, out of spite, gave advertising money to his Black-owned competitors, including NNPA. Meanwhile, those ad dollars are said to have been much less than what Allen requested for the consortium of Black-owned media companies.

Allen in the past has stated these corporations should spend advertising dollars in Black media as they do with white media companies especially when these profitable companies have high-profit margins from minority America.

Now the story begs the question of whether the White House and administration officials will come together with Black-owned media to resolve the great gap in federal advertising dollars for Black-owned media and create an even playing field with white-owned corporations targeting Black America by reinstating Executive Order 13170?