Gold and black have flowed through Nikole Roebuck’s veins for as long as she could remember. She was born to be a Gramblinite.

In 2019, she became the first woman in Grambling State University history to be named director of bands. It was a storybook ending for the Minden, Louisiana, native who would lead the World Famed Tiger Marching Band through a pandemic and help usher in a new era inspiring women to join the ranks of band directors.

Dunbar Hall and Eddie Robinson Stadium were the backdrops for a long list of firsts for Roebuck that include the time she saw a field show, her first collegiate marching band performance and the moment she fell in love with marching bands. Her journey takes her back to sitting on the stairs of the old Dunbar Hall watching her uncle, Joseph “Doc” Miller, who served as assistant director of bands for Grambling from 1980 to 1989 under Conrad Hutchinson Jr., conducting the band during summer camp. Although too young for an instrument at the time, she settled on a spot on the field at the bottom of the director’s stepladder, but her interest was piqued.

“I made sure Uncle Joe [didn’t] fall off the ladder. So I was that little girl just looking at her uncle, never imagined in a million years that I would become the director of bands for Grambling,” Roebuck said. “But that was my first love of music, just being around the marching bands. I’m a band director because it was natural for me. So it was my job to make sure that I can teach my kids to do what I can do.”

Roebuck’s path to becoming leader of the Tiger Marching Band started in the same seats as her students. She was described as naturally meek and mild in her adolescent years, and Roebuck’s collegiate career started the same way before she was called out for only being quiet and playing the clarinet; it inspired her to come out of her shell. She opened up and moved up the band ranks, becoming a section leader, drill sergeant and eventually a student director in her fifth year in the music department. While obtaining a master’s degree and a doctorate, directing a middle school band and being assistant band director of the Tiger Marching Band, Roebuck developed a leadership style tailor-made for her and true to her Louisiana roots. 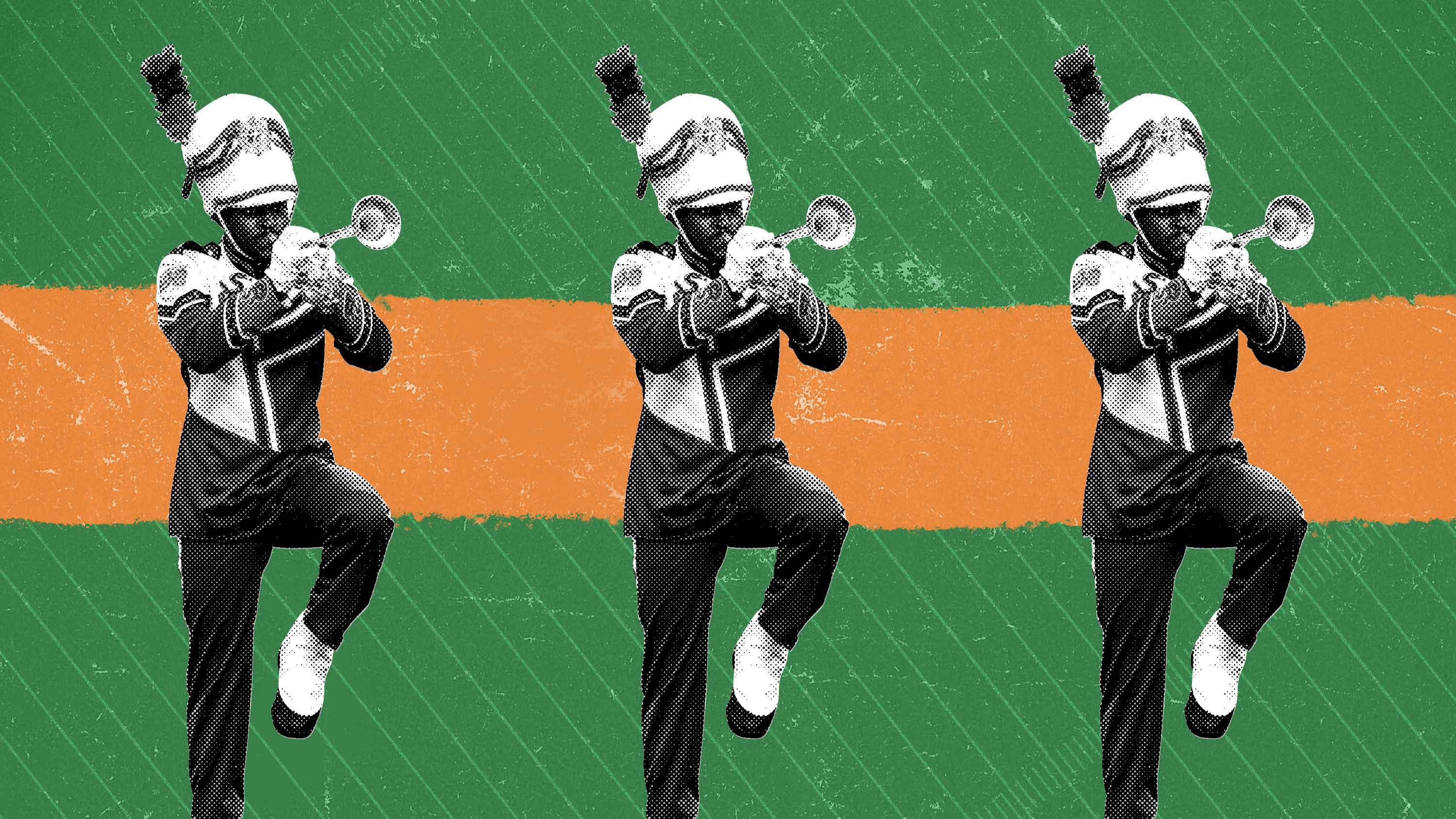 “It’s kind of like a pot of gumbo. I have taken some great characteristics from various directors, and mold them up to make them work for me. I don’t ever try to be anybody else, but I might say, ‘I like this, but let me make it work for me,’ ” Roebuck said of her teaching style. “The longer I’ve been teaching, I’ve learned for different generations you have to tweak [your style], if not every year, every couple of years, because the students that we teach are different.”

Grambling assistant band director Charles Lacy, whose relationship with Roebuck has lasted for more than two decades, has witnessed her growth and ascension over the last 20 years and believes that the elevation of women to band leadership positions has been a long time coming.

“In watching her growth and the trailblazing, I’m proud of her, but I think that we are just late when we look at women in music,” Lacy said. “I think it should have happened a long time ago and we just have to do better as a people.”

In November 2019, Roebuck and Simon made SWAC history as two female-led HBCU bands performed for the first time. Roebuck and Simon are two of four active HBCU female band directors — Juliet Boykins of Elizabeth City State and Fayesha Cousins of Virginia Union are the other two. 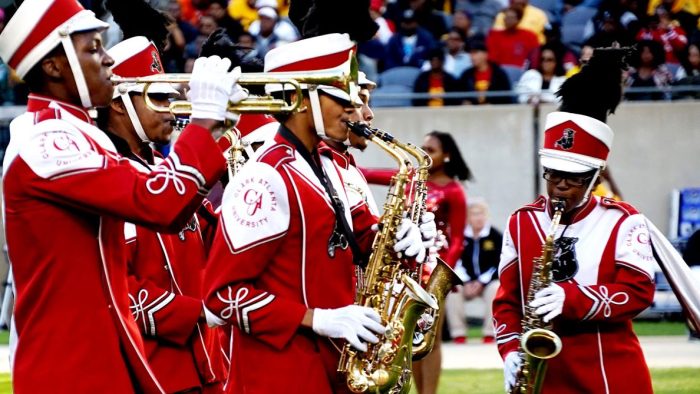 “I never imagined that Grambling would have a female band director. But I’m honored,” Roebuck said. “It has been known as a male-dominated profession. So that’s not a secret, but of being in the position that we’re eager to do the things that we’re doing. It’s just paving the way for [women] to come, and I look at it as being a servant.”

Roebuck understands she’s under a microscope. Her performances are often critiqued with a fine-tooth comb, but she tends to focus on the positive. She embraces the fact that young women look up to her as a role model. Female musicians from other programs don’t hesitate to approach her after performances to talk while the band is loading up the bus and preparing to leave.

“They say, ‘You give us hope, because we felt like we would only be able to be middle school or high school band directors. When you direct [the] band at Grambling, it gives us hope to come back and be the director at my school.’ So, to have young ladies say that you’re a role model, it was a little bit more pressure on everything else I’m doing, but just thankful that I’m in this position. All of us that are in this position right now can pave the way.”

Roebuck’s influence has trickled down to the female members of her band. The World Famed Tiger Marching Band not only has Roebuck as a woman in power leading the way, but this season senior Candace Hawthorne was named drum major along with Deante Gibson and Sheavion Jones. Hawthorne is the second woman in Grambling history to become a drum major — Velma Patricia Patterson was the first, serving through 1952. Hawthorne and Roebuck are a rare combination at the forefront of an HBCU band, and Roebuck relishes the opportunity to mentor and encourage Hawthorne, who she believes has the honor and pressure of being the first female drum major in 69 years.

“[Roebuck] has taught me to keep my head up no matter what people say about me. Becoming drum major is really big news and a lot of people are excited for me, but with all the positivity going, there’s always some negativity out there somewhere,” said Hawthorne, a Dallas native. “So, she encourages me and gives me advice because she knows what it’s like to be in a big spotlight because she’s the first female director of bands at Grambling State University.”

When Roebuck sees Hawthorne, she feels like she’s looking into a mirror. Both are naturally described as quiet and headstrong women who can accomplish anything they put their minds to.

Hawthorne set her sights on drum major and went through the learning process during the pandemic, making sure she was on every Zoom or Microsoft Teams call, practicing almost every day and occasionally working out to stay in shape. Hawthorne worked even harder and leaned on her bandmates to encourage her when times were difficult. Hawthorne’s appointment brought Roebuck back to her own experiences.

“I feel like I’m reliving being named director of a band with her being named female drum major,” Roebuck said. “I just feel like I’m passing the torch to her because one day she’ll have a band program. Who knows, we might look up years later and Candace Hawthorne might be the director of bands.”

Hawthorne, like most college seniors, can’t predict what her future holds, but thanks to Roebuck, she hopes music is always a part of her life. She hopes other female musicians see their example at Grambling and are encouraged to follow suit.

“No matter how big or small a dream is, as long as you believe in yourself and work hard for what you want, it’ll come true,” Hawthorne said. “Failure is not an option and never settle for anything less.

“Never be discouraged just because you’re a [woman]. Make yourself stick out to where they can’t take their eyes off of you and show them what you’re about.”