A look at the Black stars (and hopefuls) for the U.S. men’s national team — Andscape

In the last 40 years, the U.S. men’s national team has gradually grown its fair share of Black players on its rosters.

Continuing on the path blazed by Eddie Hawkins, the first native-born Black player to play for the team in 1984, fellow trailblazers Desmond Armstrong and Jimmy Banks became the first U.S.-born Black Americans to participate in a World Cup in Italy in 1990.

The popular Cobi Jones and current U.S. Soccer technical director Earnie Stewart took the baton from Armstrong and Banks to star at the World Cup in the U.S. in 1994. Jones and Stewart facilitated the U.S. team’s advancement out of the group stage into the Round of 16 before narrowly losing 1-0 to the eventual champions, the mighty Brazil.

Over the next two World Cup cycles, 1998 and 2002, the likes of supertalents Eddie Pope, Beasley and Tony Sanneh, as well as Black Colombian-American Carlos Llamosa and nationalized Martinique-American David Regis, increased the number of Black players on the national team. And in the last 20 years, standouts such as Tim Howard, Eddie Johnson, Cory Gibbs, Jozy Altidore, Charlie Davies, Maurice Edu and DeAndre Yedlin would be among many to enhance the African American presence on the men’s senior national team.

Now, on the verge of current team manager Gregg Berhalter releasing his final 26-player squad for this month’s World Cup in Qatar, the presence of Black players on America’s senior national team has never been higher. 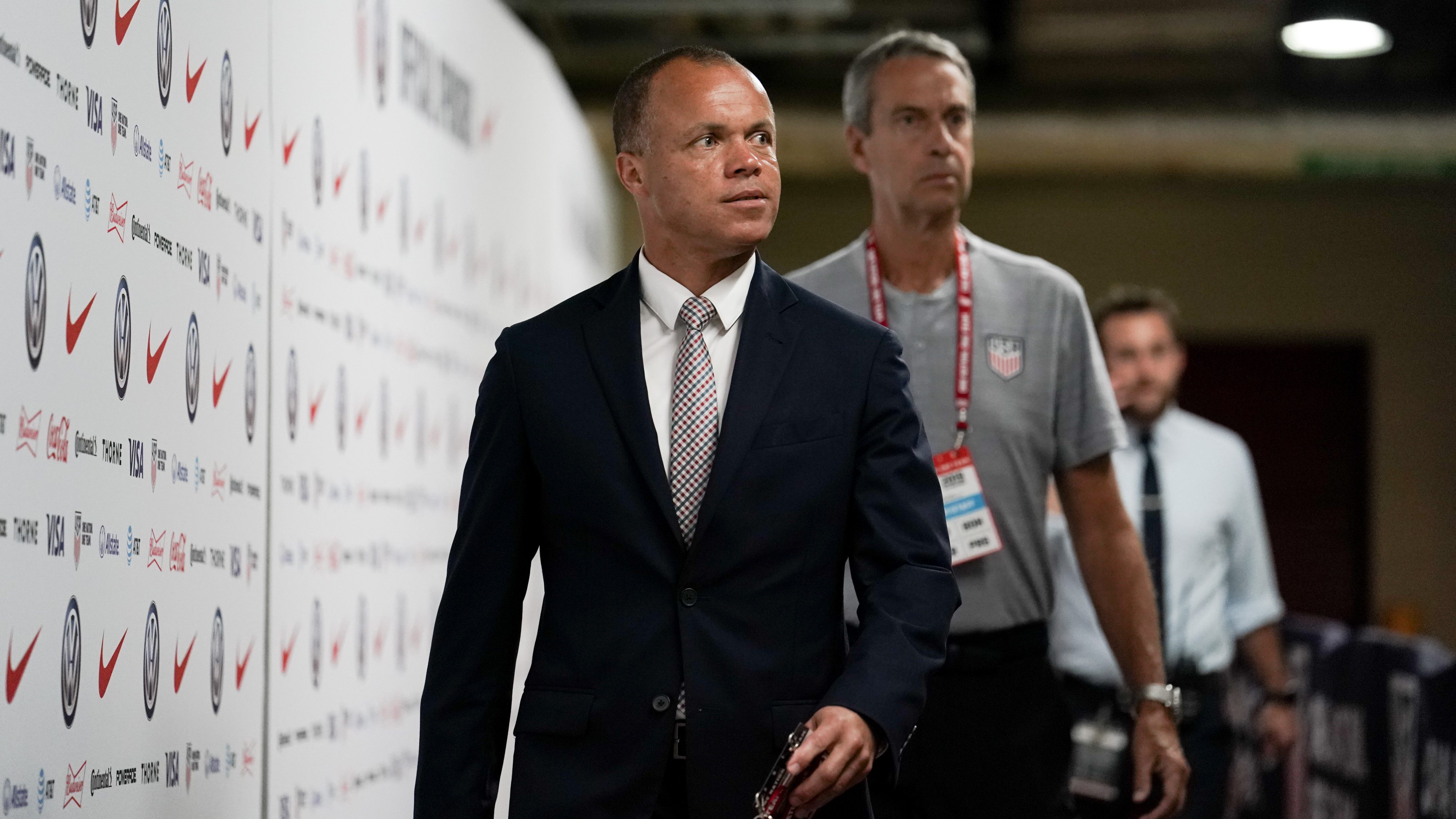 Earnie Stewart has a plan for the future of U.S. soccerRead now

Among those players hoping to be on Berhalter’s roster is one of U.S. Soccer’s many young promising prospects, 19-year-old Kevin Paredes.

Paredes was born to Dominican parents who emigrated to greater Washington D.C. and debuted in professional soccer in Loudoun County, Virginia, with the MLS team D.C United. Paredes is enjoying his first full season for reputable German club VFL Wolfsburg of the Bundesliga, considered among the best leagues in the world.

After becoming D.C. United’s most expensive transfer, Paredes moved to Wolfsburg in late January and participated in his first two professional games outside of North America in the second half of last season. Now under new manager Niko Kovac, Paredes has not only earned key substitution minutes for his new club, but received his first Bundesliga start two weeks ago in Wolfsburg’s 2-2 tie vs. Bayer Leverkusen.

“It was a surreal moment for me to start my first Bundesliga game,” Paredes said in an exclusive to Andscape. “It was much more difficult than it looked. A lot of thinking, I couldn’t do as much attacking as I wanted to. But I did my job in the defensive work, showed great pressing as my coach said and it was a great moment for me. Being on that field with the players and walking into the stadium and realizing that I’m starting the game. It was a crazy moment for me. Not many 19-year-olds can say that they started their first Bundesliga game. I cherish that moment so much. And I was happy to make that step.”

Despite those remarkable accomplishments for an American adolescent not trained in Europe, Paredes is fully aware of how he would need to have the best games of his burgeoning young career in Wolfsburg’s final matches before Berhalter’s decision. A minor calf injury that ruled him out of his club’s match against Bochum last week came at an inopportune time. But Paredes displayed his awareness of the big picture by vowing not to rush back and worsen his minor injury and being confident in making the team for World Cup 2026 in the United States.

“It wasn’t too long ago that I spoke to him, but the whole thing was pretty much to focus on myself,” Paredes said of his last conversation with Berhalter. “Focus on day-to-day, getting better, getting more adjusted to the team [Wolfsburg] and performances. I made a big switch from MLS to the Bundesliga. So [he said,] ‘at first, it’s not at all [guaranteed] you’re going to play right away. You have to work for it.’ And that’s the conversation that he had with me, that I need to work for it, I need to continue getting to that spot where I’m playing consistently and working hard. And I really listen to what he said, I’m working very hard. When the World Cup comes, I’m ready and if not, there’s always 2026. As long as I’m still young, I’m still learning. So happy I’ll be with the decision.”

Paredes is among a number of Black players looking to play in the team’s World Cup opener against Wales on Nov. 21. There are also Black players who are clear locks for the team, where only thing that could keep them from playing would be if they were injured playing for their clubs. And then there are those, like Paredes, who will wait to see if they have made the team when the roster is revealed.

Here are the statuses of Black team hopefuls before the final 26 are chosen.

Weston McKennie (Juventus), Tyler Adams (Leeds United) and Yunus Musah (Valencia): Arguably the three most important players on the entire team, the team’s hopes for a successful World Cup will hinge upon team stars in McKennie and Adams, and their partner in center midfield in the rising, dynamic talent Musah.

Sergino Dest (AC Milan) and Antonee Robinson (Fulham): Locks to start at full-back if healthy, both Robinson and now Dest (a precautionary abductor injury) have had to deal with ailments so far this season. But both currently look ready to start against Wales.

Tim Weah (Lille): The son of current president of Liberia, former Ballon D’Or winner George Weah, the exciting winger has gotten back into the fold for his Ligue 1 side after another wave of injuries kicked off his season. Now healthy and performing in France, he is capable of being an X-factor.

Zack Steffen (Middlesbrough on loan from Manchester City): The Boro on-loan keeper from City has shaken off his early season knee injury to be the undisputed No.1 at the Championship club. In the constant debate as to whether Steffen or Arsenal’s backup Matt Turner will be Berhalter’s starting goalkeeper, Steffen is giving himself a firm chance to retake his status as starter.

Strong chance to be selected

Chris Richards (Crystal Palace): The versatile center back would be a lock if he wasn’t plagued by a lower leg injury for almost the last two months. Richards faces a late fitness push to be healthier for the team’s opening match and will likely not play for Crystal Palace before.

Cameron Carter-Vickers (Celtic): The English-American has become a valuable member for the historic Scottish club at center back, and has placed himself with a real opportunity to not only make the final 26-player roster, but even be a starter in the opening match against Wales.

Erik Palmer-Brown (Troyes): All but guaranteed a spot in Qatar, the player affectionately known as “EPB” has developed into a competent Ligue 1-level center back after the massive expectations placed on him during his teenage years when he was courted by Juventus’ and developed with Porto’s B squad.

Kellyn Acosta (Los Angeles FC): From the team’s fan base believing that he was the next big midfield star years ago to stabilizing his career as a valuable member of the Los Angeles FC’s MLS Cup-winning campaign, Acosta is one of Berhalter’s favorite and most trusted players.

Jordan Pefok Siebatcheu (Union Berlin): After a torrid start to his Bundesliga career, the man wanting to be known as Pefok has struggled in the last month to have a big impact in matches for the German capital club. He also has the difficulty of not fitting the type of forward that Berhalter wants, as he was snubbed by the manager when he was not chosen for their final friendly matches before the World Cup vs. Japan and Saudi Arabia.

Reggie Cannon (Boavista): The former FC Dallas right back is once again a willing option with his pace and strength. But with Dest a lock and Borussia Monchengladbach right-back Joe Scally’s impressive season in the Bundesliga strengthening his ticket to Qatar, the depth at right back for the team currently is very difficult for Cannon to overcome.

Mark McKenzie (Genk): The 23-year-old Philadelphia Union product has developed into a solid center back for Belgian Jupiler Pro League power Genk. And with the absence of Miles Robinson and still lingering issues with Richards, McKenzie will have strong consideration from Berhalter. But his shaky moments vs. Saudi Arabia highlighted his weaknesses in ball control and passing that could leave him off the team.

Haji Wright (Antalyaspor): Like Pefok, Wright has developed into a clinical finisher in the box for his Turkish Super Lig club. But unlike Pefok, Wright has speed in his game that Berhalter wants to see in his lead striker for pressing and stretching any defense. Still, Wright failed to fully impress so far with the senior national team, and withJosh Sargent and Ricardo Pepi also scoring consistently for their clubs this season, Wright could be just off the final 26.

DeAndre Yedlin (Inter Miami): There is a chance that Yedlin, the only player, Black or non-Black, among Berhalter’s Qatar hopefuls who has World Cup experience, could be on the trip to the Middle East. Being the exciting youngster at Brazil 2014 for the team could really provide an invaluable perspective from Yedlin for players making their World Cup tournament debuts. But, just like with Cannon, the depth at right-back will make it difficult for Yedlin to play in his second World Cup.

Andrew Jones is a sports, political and culture writer whose work has appeared on The Guardian, MSNBC, Ebony Magazine, Salon, SB Nation and The Intercept. He is also proud of his Brooklynite, “Do or Die” Bed-Stuy ways.