a dream collaboration for ‘Iphigenia’ — 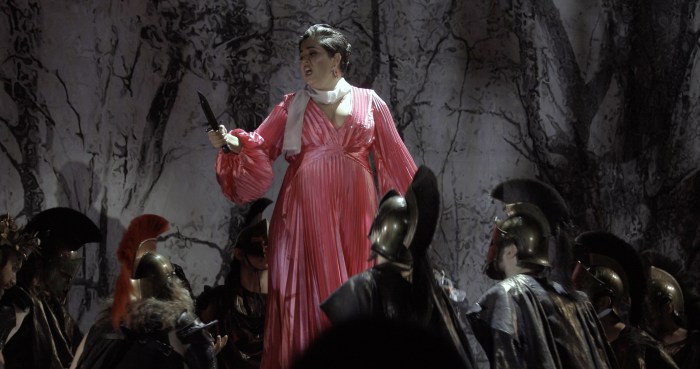 Wayne Shorter and Esperanza Spalding came together to disrupt the way we have imagined classical and jazz forms in their new opera, Iphigenia in Aulis. The story is based on the ancient Greek play by Euripides about Agamemnon and his decision to sacrifice his daughter, Iphigenia, to appease the goddess Artemis.

The music is performed by a 28-piece chamber ensemble, a cast of nine vocalists, including Spalding, and a chorus of 10 singers. It features Shorter’s groundbreaking method of symphonic improvisation and highlights Spalding’s poetic libretto. The music takes the audience from ancient days to the modern era, and uses the myth to disrupt misogynistic narratives imposed upon female characters. Architect Frank Gehry created the set design and the production was directed by Lileana Blain-Cruz.

Iphigenia opens at the Kennedy Center in Washington on Friday. Both artists sat down with to explain the impetus for this work and why now was the perfect time to share their creation with the world.

This interview has been condensed and edited for clarity.

How is it that you came to work with Wayne Shorter on creating an opera?

Spalding: Wayne mentioned to me that he had an opera he wanted to finish since he was 19, and I got activated and said, ‘OK, what’s it going to take? Who reads it? What forces do we need to rally to get this done?’ That became this mission for me. I revere him so highly and felt a little frustrated that the forces of music and performing arts hadn’t recognized this person wanting to do an opera and had supported him. That was the impetus. We said, ‘All right, we’re going to make this happen.’ And then we did.

What was the process like for you two to work on this together?

Shorter: We went all the way to Portugal. It was almost a month there, and she had her own room, my wife and I had the other room. I didn’t know what she was writing, but I had the keyboard and whatever I could imagine. Every now and then I took a peek at what she wrote, and when she gave me a few pages, I would go through it real fast. We didn’t have the blueprint, but we were going along based on one phrase that I read. ‘There’s only one rule: There are none.’ And as they say, everything goes.

Spalding: I went with him and his wife, an amazing woman, Carolyn Shorter. They had a break between tours and decided it’d be cheaper to just stay in Portugal for a couple of weeks. Wayne was set up in the living room and he was writing and I was set up in another room with an overview of the story, the narrative, and all my books and references. For two weeks we wrote that way.

How long of a journey was it from writing to the final product?

Spalding: It’s been a six-year journey. What I can say is everyone involved, the whole producing team, Real Magic, which is a production company that I started with Jeff Tang, realized right away that we didn’t know what we were doing in terms of opera.

There was a phase where Wayne was really struggling physically and he hadn’t yet orchestrated the entire score. I had just been to the Library of Congress and seen some of Duke Ellington’s scores. I never realized that he rarely, if ever, actually orchestrated the entire big band. He actually had a pretty simplified score with an idea of what he wanted to hear, and then he would collaborate with someone else to orchestrate that. He had a band on retainer, so he could bring in his ideas and just hear them played out. I had just seen that at Library of Congress and then Wayne lost the ability to physically write. We were struggling to figure out how we’re going to keep the process moving forward.

I suggested we bring in a small orchestra and he’s going to tell us what he wants to hear and we’ll transcribe that. We did that for about six months, and him hearing back when he had written at the scale that he imagined, invigorated him. He regained his ability to write and to write exactly what he wanted in orchestration, and that’s just a little window into the kind of creative process development that we were in throughout the whole life of this project.

In that vein, Esperanza, is opera something you always wanted to tackle as an artist?

Spalding: No [laughs]. This will probably be my last. But I’ve grown to really love the technology, the devotion and the grandness of opera. It’s such an immense medium. You’re overwhelmed with the power of the voice, the voice in relationship with the orchestra, and those in relationship to the stage and the narrative. I’m really in awe and excited by it. I was doing this opera because Wayne was my mentor and I adore him. I got a lot out of it, for sure. But it’s not my calling.

You and Jeff Tang raised the funds to create this opera and an effort to make it affordable for everyone who may not feel welcome in the opera house. Was this also the motivation for some of what you and Shorter did together?

Spalding: I don’t feel particularly loyal to like opera or classical music as its own entity. Finding ways to make the opera more affordable to attend has more to do with just wanting more people to be able to see this work that we made. I don’t think of the music as explicitly operatic or explicitly classical, it’s Wayne using the instrument of the orchestra to offer his sound and his music.

Through the years of working on this, one of our values has always been to not have it feel stuffy and inaccessible. We didn’t exactly know what that meant in the manifestation of the opera, but it’s always been front and center of how we wanted to move.

Wayne, you and Esperanza have the company, Real Magic, which Spalding mentioned was created expressly to get this work to audiences. Are there other operas that you’re thinking about doing?

Shorter: I’m going to see how this one goes. I don’t know if I can get my wind together to get out there again, but I’m still doing a lot of the writing.

How do you think this piece would appeal to diverse audiences?

Spalding: I identify as a Black multihyphenated disrupter, and I always feel invigorated when I see people like me fully manifesting their vision with good support, with confidence and offering a possibility out of their imagination. This opera is an opportunity to see an elder Black disrupter, a radical pioneering being, having his work fully supported and fully manifested on this massive scale of opera. This collaboration is radical in its way because it’s an intergenerational collaboration. Whatever you take away from it, I hope that we offer another version of what it looks like to manifest vision independently.

We never thought of doing a work on this scale, or if we did, it didn’t seem possible. And now I see that wherever you set the mark for what your work is going to do, that’s what it’s going to do. It might be a six-year journey. It might take a lot of sacrifice and might take a lot of work, but there’s something about having the audacity and the courage to say no to opportunities that seemed really enticing. We had to contort to the spirit of the vision and every step of the way we chose to allow the vision to be in its fullness. And finally, here it is.

Sharon Brooks is a Los Angeles native and an aspiring writer. She spends her time gardening and playing with her pandemic pug, Boo Radley.